Welcome to another action-packed iteration of The Peril.

LOOK AT OUR NEW HEADER. BEAUTIFUL! Many Thanks to Mr Bostelman for his creative stylings.

In the words of literally anyone who’s been alive and able to watch television for the past 5 years, winter is coming. The nights are drawing in, Grists requires a pitch inspection every 10 minutes from midday Thursday onwards (the last one was good, btw) and my local supermarket now has an ever-growing “seasonal” section selling an unremarkable yet questionable selection of things that will, near instantly, create an acute attack of buyer’s regret.

The Chairman has, once again, done sterling work in representing our interests and promoting our brand, this time at the TAL AGM last Monday, ably supported by The Treasurer and Dave Harry. TAL have endorsed our need for long term security at Grists, but there is more to do to ensure a sustainable arrangement that provides for our facilities improving over time and creates a strong, realistic path for the delivery of the long term MasterPlan. Should anyone want to get involved in any way (lawyers/accountants might be particular useful), please shout.

We’re getting to the meat of the season now. Gone are the days of prancing about in the sunshine in your pink firm ground Mercurials (Fine). What you need now is full grain leather and 6 perfectly rounded studs, preferably paired with an under layer that just about keeps you warm enough, but doesn’t get you fined too much (anyone wearing tights should be immediately bankrupted). This is the point at which you find out whether you can do it on a frozen Saturday afternoon in Woking, or on a storm-drenched quagmire in Archway (you have to love the magic of the cup). This is the time that legends are made and heroes cast. It’s the point of the season that separates the true warriors of Saturday football from the temporary lightweights that hung around for a bit too long after the temperature dropped below 15 degrees. If you’re reading this, you’re likely one of those warriors. The Peril salutes you.

So, last weekend’s football. I’d like to say a mixed bag, but the contents were, unfortunately, mostly at the disappointing end of the spectrum. The 1s failed to win (Will’s hair wasn’t looking quite so good, which might have had something to do with it). The 2s failed to win by the same margin, shored up by 2 heroes demoted from the vets. The 3s, sensing something was slightly off, cleverly scheduled a week’s holiday. The 4s only went and won a game! Conrad and Nader’s purple army ran out comprehensive 3-2 winners vs Meads. Hurrah. The 5s, despite Matt’s best endeavours, had a fairly torrid afternoon in Croydon. Most of the vets had a nice lie down, although I hear Dave Harry did too, despite playing the full game for the 2s.

Far more important than the football, was what came after. First, the Whiteboards saw their first action. Please try to keep yourselves calm when looking at the photo below. 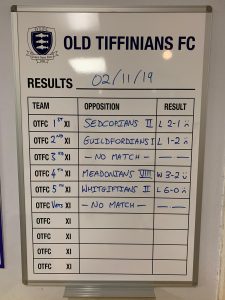 Second, following the virgin use of the whiteboards, a large volume of curry and beer was consumed at Joy, Surbiton by a group of men, most of whom were both conscious and fully clothed. Props to the 1s, who turned up in strong numbers to save the event, the other teams must do better at future socials. Or be fined heavily. Details on the Xmas doooo below.

Another Saturday of mud, sweat and balls is on the horizon, with much anticipation of a nice warm group shower after an enlivening game of soccer. Pop by for beer, banter and, should you fancy it, team showering. 1.30 onwards, Grists.

Wishing you a goalfest of a weekend. Go Purps.

“The fight is won or lost far away from witnesses – behind the lines, in the gym, and out there on the road, long before I dance under those lights.”
– Muhammad Ali

Please wish Danny Leach a Happy Engagement. Danny finally popped the question this week. There are now many unengaged members of the club, of a similar age, nervously trembling, mumbling and looking away into the far distance as their other halves stare expectantly at them, almost as if into their very souls.

Unfortunately there have been no complaints about the previous volume of The Peril. We await your pedantry.