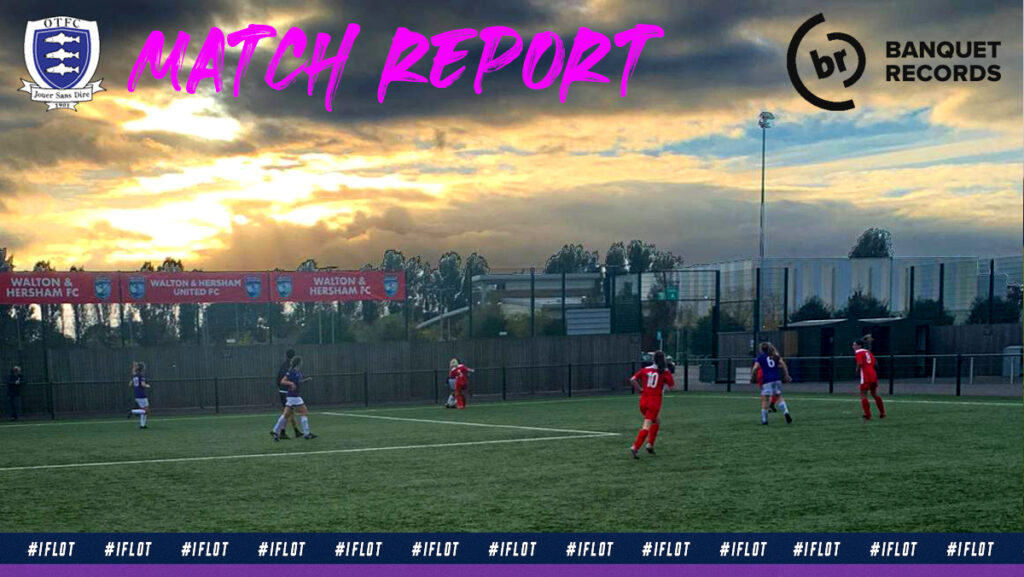 On a crisp Sunday afternoon under a beautiful sunset and alongside the Thames, the Ladies of Old Tiffinians FC arrived for their second league game. Facing another newly established team in Walton & Hersham Ladies, the Tiffs arrived hoping to continue their strong start to the season.

Despite stepping on to what can only be described as the largest seven aside pitch this side of the Thames, Tiffs felt ready and raring to go. A small crowd of OTFC 3s, family, partners and ladies fans assembled pitch-side, while Coach Paul laid out the tactics.

The match started with a high intensity, both teams pressing one another when without the ball. With a lot of space on the pitch, Tiffs started to find their rhythm and string some through balls together. Consistent pressing was undertaken by Aurora Sullivan while Chloe Binnington and Fiona Leggat ran the channels well, fed by passes from skipper Sophie Ramsbottom and Lauren Harper. However, faced with considerably smaller goals than usual, Tiffs early efforts were sprayed high and wide. Thankfully no adults or children were harmed with these attempts. Walton & Hersham also maintained good spells of possession during the first quarter. Although no shots to test keeper Amirah Rahman were dispatched, this was only due to the credit of several sliding challenges and interceptions from Matilda Schlegel and Sophie. At the end of the first quarter, and after a lot of running, pressing, and fine saves from the opposition keeper, tactical changes were made.

Tiffs began the second quarter seeking to implement a more possession based game; it was clear constant through balls and tracking back were unsustainable. It was at that point the breakthrough goal came courtesy of the Tiffs skipper. After a one two exchange with Fiona, Sophie executed some fine skill to weave her way beyond several defending players and slot the ball past the opposition keeper. 1-0 to the purples! With new-found belief, and the arrival of Ana Lourenco Cheang and Alanna Turner off the bench, Tiffs quickly doubled their lead. Ana managed to poke a square ball home into the net and beat the Walton & Hersham keeper who was putting on a stellar display. Unfortunately, that was where Ana’s match ended; commitment to scoring the goal was too much for her hamstring. It is feared her goals per minute ratio may now never be beaten!

In the final two quarters of the game, the expansive pitch began to influence the Tiffs. Despite strong efforts to press from Chloe, Sophie, Fiona and Aurora, both teams intensity dropped. Nevertheless, Alanna and Matilda remained solid at the back, and Amirah remained vigilant to any shots that threatened to hurt Tiffs.

Slowly, the fitness and flair of purple army shone through. With strong challenges made by Fiona and Sophie and tracking back from Lauren and Chloe, Tiffs dominated the centre of the park and both channels. With the constantly rotating goalkeepers keeping their team in the contest up to this point, the resolve of Walton & Hersham started to weaken. In close succession and after one piece of individual ‘Messi-esque’ brilliance from Sophie, Chloe dispatched two fine strikes into the back of the net.

With darkness looming, and after what could be described as a survival of the fittest, the game finished 4-0 to the purples. Tiffs hope to continue their run of wins and clean sheets as they enter the lead up to the festive period!

Players of the Match sponsored by Banquet Records: