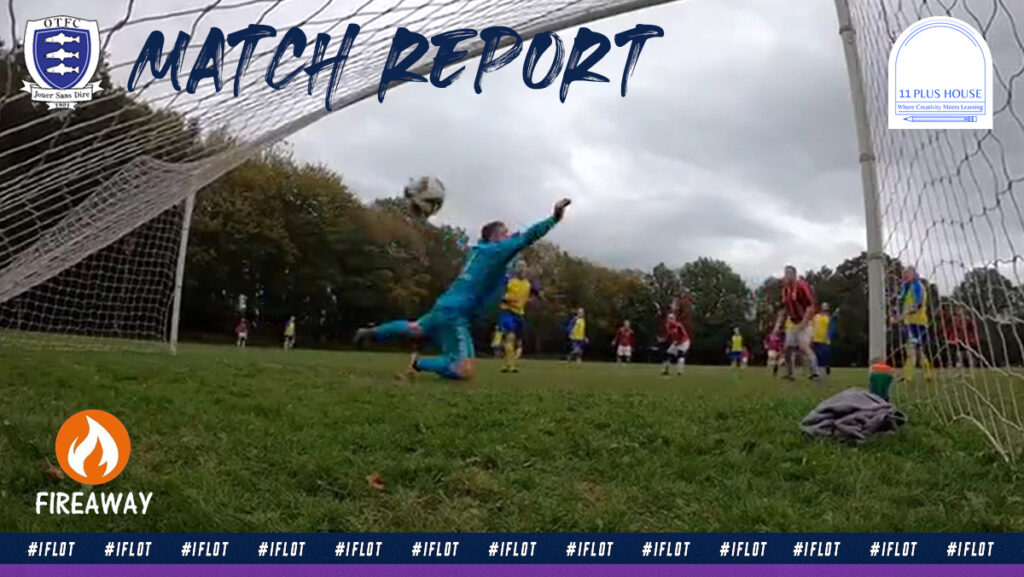 Temple Bar: a busy riverside neighbourhood, spread over cobbled pedestrian lanes. Crowded pubs host live folk music and DJ sets, and diners pack restaurants serving Asian, American and Irish cuisine. Quirky boutiques stock clothes and crafts by local designers. Likely to host groups of 13 or less, aged and decrepit men past their sell by date but always with a hint of one last hurrah within them.

Far from the live bands of Dublin, this Temple Bar played host upon their hallowed tufts of grass, the oppo smoothly convincing the visitors that fielding a 26 year old was ‘alright yeah?’. No worries boys, it is after a friendly.

Old Tiffs started well, positive attacking play from the now trusted 3-5-2 proving too much for the home team to deal with in midfield. The pitch being the only hindrance to their natural flair and distribution!

Temple bars athletic keeper (he won the 100 metres at 1982 sports day) parried a 40 yard (5 yards) screamer into the path of Ricky the poacher who bagged the first from close range. To be honest, if he had missed it would have been reminiscent of Goal Cam September ‘21.

Temple Bar stepped it up a gear and spread the ball to their star teenage striker who picked out Big Dave. Big Dave nutted it into the back of net bringing the scores level at 1-1. In the interests of fairness, Clinton decided not to attempt an interception of the cross.

It was likely this point that Nick decided he’d had enough and requested his first of several self-substitutions. Stand in manager Kent made the executive decision of ‘he looks alright to me’ to completely ignore said request and instead substituted himself and Ridgeway on for two fit and healthy(ish) Old Tiffs.

Some would say impact players, some would say a 30 yard pea roller should never had made it over the line but some fine link up play saw Val launch a screamer into the bottom left corner that ripped through the keepers fine dive. In reality the attempt at a save would easily win 250 of You’ve Been Framed English pounds resulting in a suspect shoulder injury to the keeper. Anyway, 2-1 to the good guys and soon came half time.

Paul Banoub must have seen the future as never has anyone repositioned a Go Pro so quickly during a halftime break!

Old Tiffs started where they left off and not even the springy, nifty centre forward could penetrate the back line of Naylor, Markham, Burgie and Jones. Formidable across the back, it pains the scribe to admit that Baile played his game of the season, failing to kick the ball into touch once! I think Markham almost scored a header from a corner but decided not to connect with the ball in the slightest.

Shot of the match goes to Ridgeway with his left peg. Literally the only save the keeper made to prevent a goal of the season contender. Surely this makes Goal Cam!?!

Mark in the Centre dominated midfield and regardless of Temple Bars lack of structure, spread the ball unbelievably well. He should have taken the free kick that Nick smashed over the bar but bonus points for destroying the oppos motorbike.

Old Tiffs in danger of looking like footballers pinged the ball out wide. Forgive me for forgetting who laced one into the box but Banoub rose like a plump phoenix to nod in. ‘Big Dave can do one’ is allegedly what he shouted when it hit the back of the net before realising he had forgotten to celebrate in front of Goal Cam. Arms raised and fist pumps to feature on tonight’s edition.

Not to be outdone by Vals screamer, Ridgeway pinged one from 35 yards that stood no chance of making it into the 6 yard box, let alone sneak under the keeper. But sneak it did! 4-1 the away team!

Did I mention Nick asked to be substituted? His mysterious injury aside he almost ripped a hole in the net from the edge of the box but Temple Bars keeper decided to save the bloody thing. Thankfully he wrapped the ball up and put a lovely bow on it before placing the rebound at the feet of the oncoming Banoub who leathered it into the top corner from 6 inches out. How are we still waiting for Goal Cam?

Player of the Match sponsored by 11 Plus House