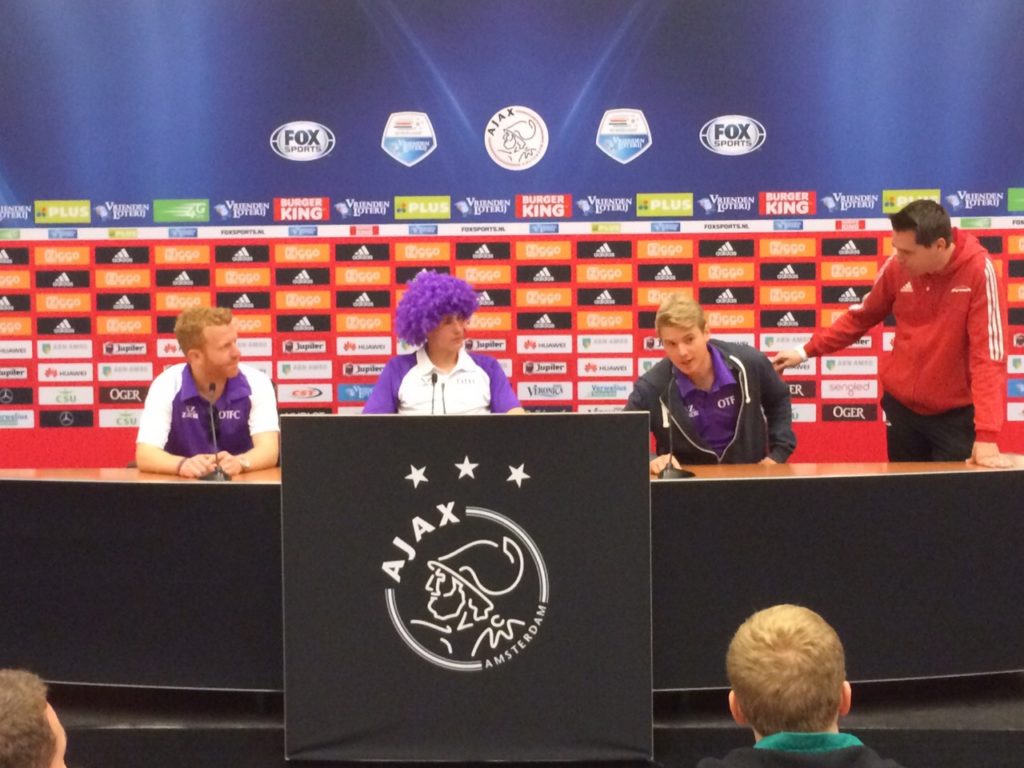 After a healthy introduction to the ways of the Tour and an evening sampling the fineries of Dutch culture, the OTFC Tourists arrived at the Amsterdam ArenA in various states of disarray. Thankfully an hour wandering bleary-eyed in the footsteps of so many of the game’s greats was the perfect cure.

Teams had been determined in secret beforehand, but only in the upper tiers of the ArenA did everyone actually realise who was on their side. Mostly because the separate teams posed for a photo.

Both sides were strong, the Heroes lining up with Seb ‘Seblaar’ Rose in goal and a back-line of right-backs (Al ‘Once a Month’ Cunningham, Mikey ‘Hooker-Squirt’ Lutz, Dicky ‘Speechwriter’ Bostelmann and Andy ‘All My Friends Are Cheerleaders’ Dickenson). A youthful midfield pairing of Bruno ‘Zoom’ Robertson and James ‘Or-der’ Kimber allowed Will ‘Under the Radar’ Forsyth to add weight to the proceedings. This would be the perfect platform for supporting the profligate OTFC-Trident of Dave ‘Tramlines’ Bettis, Aaron ‘Meltdown Wave’ Langford and Johnny ‘Where’s the Stress Wig?!’ Edwards, or at least it should have been. Greg ‘Royale With Cheese!’ Nutt was benched for reasons best left unsaid.

With Papa starting between the sticks, Fuse at centre-back was expertly marshalled by the sagely leadership of Chrissy ‘Peake-spotter’ Wight. Supported by the voracity of Mark ‘No Words Can Describe’ Carter and the bamboozling meg-skills of Ben ‘#OTFC4Ever’ Tillet the defence looked watertight. Adding his finger to the dyke was Jakey ‘A-list’ Cuddihy in a holding (cuddling?) midfield role at the base of a 5-sided-diamond. Ahead of them were Simon ‘Fontmeister’ Titcombe, the Is starlets Tom “Pure Tour Gold’ Scott, Steve ‘C-Dragon’ Goodings and Joe ‘#Crossbar’ Matthews, with Marcus ‘Sleeperman’ Scarrott in the lone striker role.

In true OTFC fashion the game started with one of the sides conceding an early goal. Almost from kick-off Hero Bettis sliced the Legends open with an inch-perfect throughball to the feet of Langers Langford, who made no mistake with the finish. The game then ebbed and flowed for a short time, with neither side able to control the ball sufficiently to create a decent chance. (The wind would later be blamed, as is customary when both sides are so visibly short on quality.)

It came as an incredible surprise to everybody then, when Mat Matthews took it upon himself to show some flair, stepping inside his man and driving the ball cleanly against the crossbar. This then happened again. And again. The one time he opted not to shoot and hit the bar ‘The Left-footed Lasergun’ whipped-in a delicious cross for Scott to head home to level, before then doing the same again for Goodings to edge the Legends ahead.

Before kick-off it had been Rose who looked-up early return flights on Easyjet, but at half time it was birthday boy Dobby Goodings who was first to bail. Eventually convinced to continue, it would not be long before Mr G was lying at the side of the pitch wondering whether the nearest toilet was worth a visit.

The early skirmishes involved some high-level flair from some unexpected sources: new boy Tillet ‘megging Robertson before Carter turned Bettis inside out with his silky footwork. With Tits Titcombe marauding down the flanks one way and Engine-Room Forsyth raking passes(?) the other way, the game became wide open – just long enough for the most unlikely source of tekkers all day. Intercepting a short pass Mike ‘Who Me Rio’ Lutz drove down the right, looked up and somehow played an inch-perfect defence splitting ball to the feet of Langford who again made no mistake with the finish. 2-2.

The momentum had started to swing in favour of the Heroes, and a smooth, passing move involving Forsyth, Nutty, Kimber and Bettis set Robertson up to calmly slot home for 3-2.

A few wasted chances later and it looked like the Legends had gone to join Goodings for a lie-down. Enter Mr Scott (re-enter? Ed.). Latching onto a delightful return ball from Scarrott, the Tour Vet Of The Tour beat his man before lifting the ball effortlessly over the head of the unrushing Rose. A fine finish. 3-3 and game back on.

Chances came and went both ways and the game was impossible to call. ‘Clownfoot’ Edwards tripped over himself on more than one occasion as he failed to deal with the very concept of control; Scarrott came close with a header and a snooze; Bettis, Kimber, Robertson and Langford all chose to pass rather than shoot when through on goal; saves were plentiful each way and Mat Matthews again hit the bar.

Given the quality of the game it was perhaps fitting then that the deciding goal came from a litany of errors.

After conceding the ball in midfield, the Heroes regained possession from a Legend slip. Working it slowly forward, Nutt dazzled Carter onto the floor and found Langford on the left flank. Looking up and shaping to shoot, the ‘disguise’ of his pass to Edwards was so Top Secret even Morris wouldn’t have had the security clearance to read it. Assuming a shot,  Edwards fled. Wight followed his man, stepping the line with him, with no time to adjust to even a redacted version of the pass. The ball then trickled agonisingly off Wight’s back heel, defeating the up-stepped defensive line and finding the bottom corner. Bad luck, but 4-3 Heroes.

This was the strawpedo that broke the camel’s back, and in an ebbless tide of Hero pressure Edwards swiftly snaffled a loose backpass to make it 5-3.

The game petered out, but not before Bettis made a mid-game transfer to the Legends, the Heroes wasted more chances and Tillet tried to snap Edwards’ ankle. With the last kick of the game, Tingle Robertson made it 6, a score line that perhaps flattered the Heroes.

After the game, the captains made a bold ‘double or nothing’ play, opting for team penalties to settle it. Seblaar remained in goal for both sides, and there were fines to be imbibed for anyone who missed. Some scored, some missed (only Nutt almost cleared the fence though) and Mat Matthews hit the bar. The game was finally settled by the most audacious pen ever seen on that ground. Tingle Robertson-Tingle took a short run up, and as he shaped to shoot flung his boot off his toe one way before smashing the ball into the top corner the other way. Classy.

Overall the game was played in a fine spirit, with representatives from all sides in the Club. We look forward to taking the camaraderie (not the incapability) into the new season!