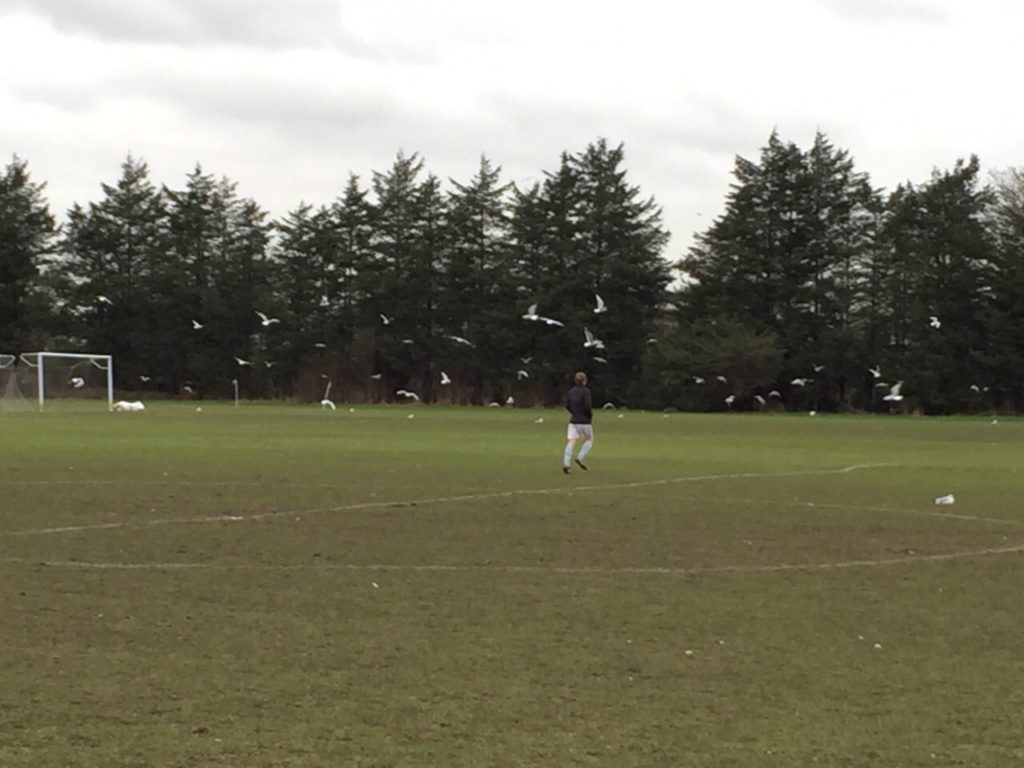 Ten years. A decade. 120 months. Cottee’s mental age. There are many different ways of expressing it, but nothing really can capture it in words, which is what makes this article a little pointless, but I’m still gonna write it anyway. There’s nowhere else to start then at the beginning. I made my debut for Old Tiffs in 2003 as a wide-eyed, naïve young man. There was so much I was still to learn like how algebra was going to affect my daily life, when the right time is to conjugate a verb in Latin and how to cope with Reigate’s ridiculously sloping pitch. I was recruited into the VIIs (yes, we actually had seven teams and a vets at one point) as part of a team combining kids from the school and some wiser, older heads. I started as a centre-back, playing alongside the likes of Tiffin legends Tony Cleeve and Nigel (I don’t think he has a second name). We had the pace of the youngsters and the intense football knowledge accrued over years of hard work and we were dreadful. The problem actually turned out to be the youngsters; too lightweight to shrug off or make tackles and too clueless to read the game or know what position to be in – in their defence, most had never played a proper game of 11-a-side before. Most of my schoolmates found it hard-going and physically demanding. If they’d stuck with it, they’d have got better and better, but few did. At present, I am the only member of the class of 2004 still turning out for Tiffs. I played a few games for the VIIs but then had to miss a match due to a cross country race. After that, I never got another call from the team, but then, when you have seven teams, player retention isn’t such a big issue.

But, anyway, off to Uni I went, all the way to Kingston. I played a few games for the Uni team, but gave up. Then, a year later, I got a call informing me of a friendly game for new players at Tiffs. I was back in. This time, into the Vs. When asked where I played, I lied and told them I was a central midfielder. Time to reinvent myself under the leadership of John Dickens. I spent a year there, then, during the first friendly of the season, I was told I was moving up to the IIs (the IIIs and IVs being something of a closed shop back then). I played one game for them and then they folded. The IIIs became the IIs and the IVs became the IIIs. I was in the Old Tiffs equivalent of limbo, no club to call home and my agents desperately scrambling to sign me a deal, I ended up in the recently promoted IIIs. So, within the space of two weeks I’d been a member of three different clubs and had barely kicked a ball. Time for a new skipper in the form of Julius Miller. When asked where I played, I said central midfield, he replied by telling me he had about seven of those and that, as I was the youngest player in the team by about ten years, I was now a winger. Time to reinvent myself… again.

The IIIs were probably my best years in terms of Old Tiffs. We had a solid side, dependable, reliable and they all knew how to play the game. We sometimes flirted with that bit of the standings above mid-table mediocrity. I think it’s called the top-half. This was also the place I earned my nickname “Forrest”. At the time there were three Matthews in the team; myself, Matt Bennett and Matty Seabrook. We played a game, I think it was at Sutton, and every time someone called “Matthew’s ball”, panic reigned everywhere. All three of us seemed to be caught in some sort confusion, the kind a drunk feels when he walks into a mirror. Was that another Matthew calling for the ball or was that someone else telling me that I should be getting that ball? Indecision has never been a feature of winning side. So, in Woodies pub, New Malden, someone made the point that it was getting ridiculous and that we all needed nicknames. Matt Bennett got to keep the “Matthew” moniker as he was the biggest and strongest, Matty was referred to by surname, but what to do with me? That was when Wazza – I think – piped up with the nickname Forrest as in Forrest Gump. Why? Because I’m fast and I only run in straight lines. Never has what should be deemed as an insult felt so appropriate. And, unlike my pace, it’s stuck with me.

But all good things must come to an end and the IIIs went through big changes when key players retired at the same time. Time for a new skipper in the form of Sniffer. He didn’t ask me where I played. He already knew I was a winger. Someone had tipped him off, the bastard. So, on the first game of the season, a friendly, I broke my hand. Cue a month out and an instruction to go down to the IIIs (the club was now down to three teams) to get my fitness up and I would receive a call in a few weeks to come back up to the IIs. That call did come… about six months later. I turned it down. Why? Because of a man called Ralph Stadie. The new skipper of the IIIs had never seen me play before. “Where do you play?” he asked, “because you play like a central midfielder.” I loved that guy. Time to reinvent myse … you get the point by now. Sadly, my days in the IIIs were also the worst. Nothing to do with Ralph, who did his best to keep the team going. There were many problems with the IIIs, the main one being the lack of a core. I believe that season we broke a Tiff’s record for amount of players used, somewhere in the 70s I seem to remember. We also had quite a few games in Kent, which meant a schlep around the M25 only to get to the game and find three players have pulled out at the last minute and you’re down to ten.

This wasn’t the worst of it, though. My worst memory in the purple jersey came at home. It was worse than tearing my groin and being out for three months, it was worse than losing 8-0 at Guildford and it was worse than finding out that Mike Lutz has used your towel. We were playing Old Sedcopians and I turned up to find out someone had pulled out that morning. He was on the phone at the time. We still had eleven players, though. One of them was a friend of the guy who was in the process of dropping out. His name was mentioned. “Oh, he’s not coming either. Didn’t he tell you?” To pull out on the morning of a game is pretty terrible, but at least he had the decency to let us know. The other lad, though, didn’t even bother to do that. Naturally, I was livid. Ten players at a home game. It was a disgrace. A new low. I took my anger into the game. By the time we were 8-2 down, I let it get the better of me. I was throwing myself into tackles left, right and centre. One guy even refused to shake my hand at the end of the game because I’d thrown my shoulder into his chest as he passed the ball around me. It was after that game that I decided I needed to get out. I’d spent a couple of months in Fiji the previous year and enjoyed playing rugby with the kids at my school. It was time for a change. Originally, I divided my Saturdays equally between rugby and football, Frankie and Una on one side, Molly and the one who married that lad out of JLS on the other with Vanessa split down the middle. However, things are changing. People like Greg, Ciaran, Mike et al. are doing excellent work turning the club in the right direction and long may it continue. Hopefully, I’ll still be playing in ten years to see the club flourish again, by which point I will have reinvented myself as a creaky centre-back, modelling myself on Patch.