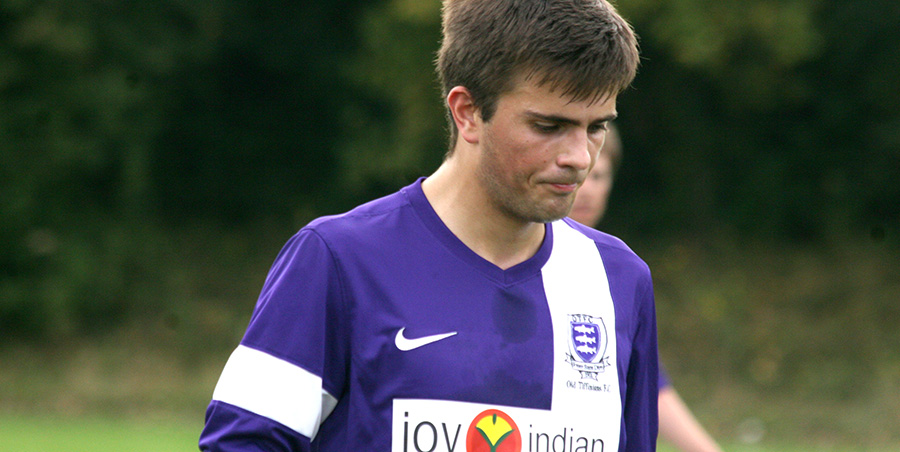 The mighty OTFC IIs, gaining momentum from a well-fought 2-2 draw last week, were looking to extend their so far unbeaten season against a well-drilled and fluorescently orange Shene Old Grammarians side.

The teamsheet was considerably different from Tiffs’ previous weeks’ performances and plagued even more so with injuries: Sammarco out injured walking up a hill, Bettis out injured kicking a ball, Avery out injured (on holiday), Kimber out injured from something that really should’ve healed by now, and newest recruit Le Tom, not injured but travelling back to his home nation to fetch his shorts, which he inconveniently forgot to bring with him after his transfer.

Tiffs however welcomed back a few old faces to bolster the back four, notably Mitchell and Dickenson, one man of iron, the other a seeker of justice. A sturdy base, especially with Mortimer starting at right back, and goalkeeper extraordinaire Thomas Hobbs making his first start of the season. The defensive line also welcomed back an old face in the form of Luke Peake at centre back, a position he hadn’t honoured the club with in a good few months, and we gradually learnt why.

Tiffs started strongly, a first this season perhaps, and enjoyed some good spells of passing early on round the midfield of Forsyth, Hollamby, Lamble and Nichols, linking up well with Tommo and Edwards up top to build some early pressure on the Shene defence. The injury list was soon to grow however, and after the first 10 minutes, there were visible limps from Hobbs, Dickenson, and captain for the day, Will ‘Glass Ankle’ Forsyth. With a bare 11 until Kuldeep arrived, having finished celebrating his 5-goal haul for his ‘other team’ in the morning, an easy day it was not turning out to be.

After the first third of the game, the injuries started to hamper Tiffs – Peake was caught at the back with no uninjured option to his side, front or behind, and was dispossessed in front of goal by their oncoming striker, who calmly slotted home. 1-0. Shene’s second goal came moments later after a dubiously-awarded free kick was floated into the box and ricocheted around between poorly communicating Tiffinians before a Shene foot slammed it in the corner. 2-0. The less said about the third goal the better – the lesson we can all learn from it however is not to pull out of clearing a cross without being absolutely sure your goalkeeper did actually call for it, which in Luke’s case, Hobbs didn’t. And also perhaps for the goalkeeper to keep his legs shut in this instance, just in case. 3-0 down going into half time.

A rousing speech from Forsyth, who had long since subbed himself off and was deftly fulfilling the Wenger role (on the occasion of his 20th anniversary in premiership/AFC division 5 south football), and a move from 4-4-2 to an aggressive 3-5-2 encouraged a brightened Tiffs to start the second half with a bang, and a bang they got. Within the first few minutes of play restarting, Edwards lashed a shot towards the far corner which the Shene keeper could only divert out as far as Nichols, who slotted home (unexpectedly calmly) from the middle of the box. 3-1, and the comeback was on.

Well it was on, until about 10 minutes later, when Tiffs conceded another scrappy goal after not clearing their lines from a Shene attack, and giving their forwards too much space. The fifth and final goal came as Shene’s winger broke clear from a through ball and finished cleanly into the roof of the net, despite being put under pressure from both Mitchell and Nichols.

The second half wasn’t a bad performance, everything considered. Hamstrung by injury, so to speak, it was only a matter of time before Tiffs struggled with fatigue. Lack of composure and vision in midfield did reduce the number of opportunities Tommo and Edwards were able to create, even when supported for the second half by Kuldeep filling in just behind them. On a final mote of positivity, MOTM goes to John Edwards for causing the defence trouble as much as possible and setting up the goal.

A disappointing week, but as ever, ‘we go again.’ A week off league fixtures for the club development day means the men in purple will return with a vengeance on 15th October.