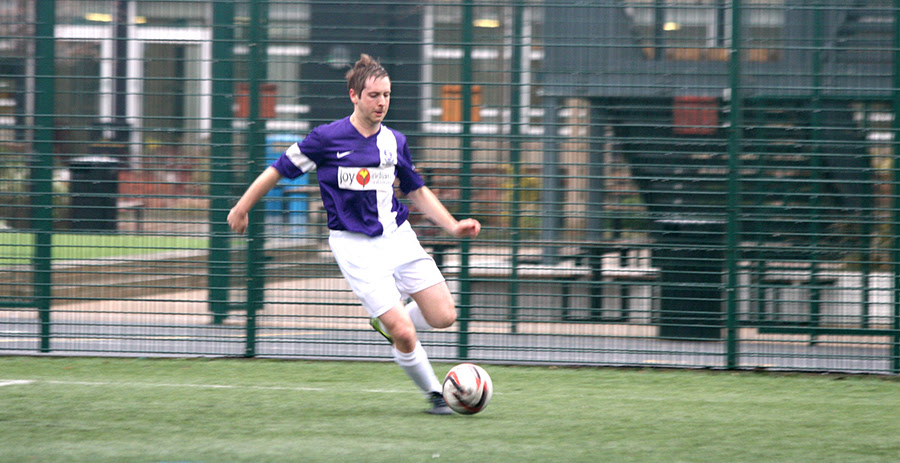 “Hotpot, Graham”, she yelled back. Hotpot, I thought. Better be bloody lamb.

FA approved kit packed and ready to go, I flung open the door of the hatchback and headed down to Woking for the div 5 game between Old Wokes and Old Tiffinian IIs. I was told it was “a big one”, all I knew was that it was cold and both teams seemed to be mid-table.

I arrived at the allocated time. This could not be said for at least two of the Old Tiffs players, who after some horrendous shin pad related mix up spent almost an hour in and out of TK Maxx and Peacocks looking for suitable attire. All a bit weird. One thing I did note was that the Old Tiffs keeper looked like he knew what he was doing. I pondered. Might he have been professional at some stage? Could have been, I thought.

Still, kick off approached. 11 v 11. The purples started well and looked to be on top. They cemented this when their tricky little left back (who looked a lot like that young, weed dealing lawyer in Suits) blasted into the box. A cheeky one two and he was in. Curled into the far corner. 1-0. After that, the first half was pretty dire, a few missed chances, some handbags that Sandra would have been proud of and plenty of foul throws. My god. The number of foul throws. Both teams kept trying to run away from me every time they had one. “Back you get, son”.

Towards the end of the first half a hopeful looping ball from Old Wokes caused all sorts of problems for the Tiffs defence. It must have bounced at least 5 times before the Wokes striker neatly finished. “Offside!” they yelled. “Offside!?”, I laughed. “The ball was kicked half an hour ago.” 1-1 halftime.

The second half started much like the first half. Some neat football in places, followed by HOOOOFF, the old Wokes keeper smashing it over everyone’s head for the umpteenth time. You would have thought the two teams could figure it out, but nope. Two Tiffs players challenged for the ball (or was it four? Charlie, Dan, Dan, Charlie), anyway, they challenged for the ball, confusion ensued and then from one of the keeper’s trademark hoofs, the Old Wokes striker (who looked fast) latched on to the ball and calmly rounded the keeper. 2-1 Wokes.

I’ll be honest, the next phase caught me off guard in many respects. Old Tiffs finally started playing football again and all of sudden…Charlie…nope. The ball was then threaded through to their left mid who calmly slotted it into the corner of the net. The resulting celebration (if you could call it that) sent shivers down my spine… but he seemed happy with himself. 2-2. Final five minutes and it was all Old Tiffs, a looping ball into the box and a terrible off side trap led to the Tiffs striker tapping into the open net whilst the Old Wokes goalkeeper stared longingly into my eyes. All very odd, but that’s what you come to expect form this level of football. Anyway, 3-2 it finished and home in time for the hotpot. “Here’s your hotpot, Graham. It’s beef”, Sandra shared. “Beef!”, what a bloody nightmare.

I’m told MotM went to Mike from Suits, I guess he’s out celebrating with his other half as she seems to be over here a lot too these days.