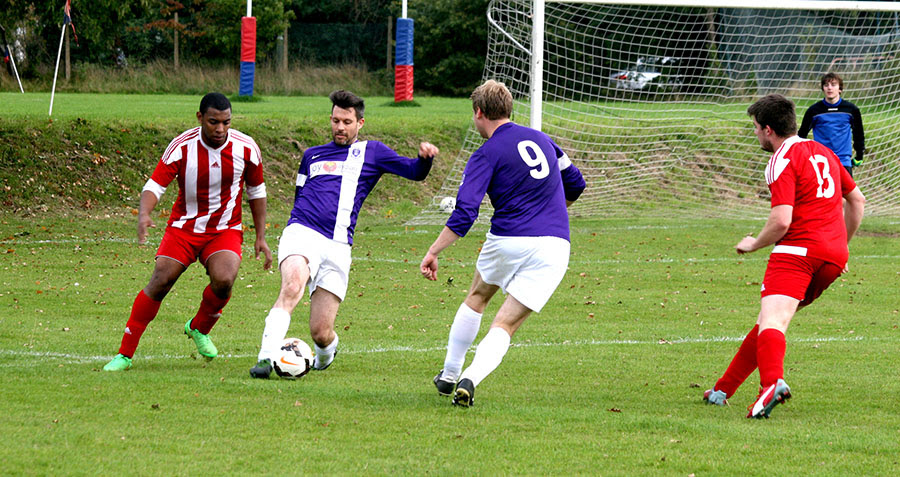 Pre game the mood from the guys was enthusiastic as we got news that we had 12 players (5 of which had new boots) which would allow for us to have much needed breathers throughout the game. The warm up consisted of keep ball and lay off shots which often ended up wide of the mark, fair to say the new boots still needed to be worn in.

The game started with the IIs straight onto the front foot, not allowing Old Suttonians anytime in possession and somewhat surprisingly passing the ball out of defence with calmness and ease. New boys Jon and Joe were providing bags of energy down the wings and the T’s were looking solid all over the park. The game continued in this manner for around ten minutes before Will got tripped and won the side a free kick. What happened next was unimaginable, after a little discussion between Kuldeep and Luke over who would take the free kick, Luke stepped up and from 40 yards curled a william-esque free kick evading everyone into the far corner. Dave briefly tried to claim the goal having felt a slight touch on his quiff but this was quickly dismissed and the IIs were 1-0 up.

The rest of the half was a fairly quiet affair with few chances being created up until Will slipped a beautiful through ball into Dave’s stride only for him to miss a one on one with the out rushing keeper. The IIs looked liked going into half time with a comfortable 1-0 lead until disaster struck out of nowhere! The Old Suttonians midfielder glided past two or three challenges and cut the ball back to the unmarked striker who hit a shot past the helpless Hobbs after it had taken a big deflection.

The IIs were down to their knees only to hear the referee blow for half time within 0.2 seconds of the ball hitting the back of the net. As we walked off the field it is fair to say half the team were still in shock as to how the score was 1-1 after bossing much of the first half. Dicky led the half time team talk and decided to change things up and go back to our usual formation of 3 at the back. The second half kicked off and apparently nobody in the II’s team was told as Old Suttonians scored two goals in the space of two minutes, Fair to say the choice of changing to 3 at the back wasn’t making Dicky look like a tactical genius which could be the reason why Klopp pipped him to the Liverpool job.

The IIs fought back well for the next ten without any real joy until Luke proved that lightning does in fact strike twice and hit a unstoppable long range effort into the top corner to the surprise of just about everyone including himself to make it 3-2. Cramp started to set in for a few players but this was counteracted by Luke who decided to make all them extra fitness sessions count and take the game by the scruff of the neck as he started to dictate play in the midfield and go on search of his hat trick.

The IIs were well and truly on top by this point but couldn’t find the equaliser this is until the Old Suttonians goalkeeper decided to gift wrap a goal to the T’s. Having previously been warned by Kuldeep not to go short from his goal kicks, the Old Suttonians keeper was clearly under orders not to go long and tried playing another short pass out to his left back only for Kuldeep to read the pass and intercept it before squaring to Tommo for him to tap in from 2 yards out to make it 3-3. The T’s had their tails up now and the pressured finally told when Dave crossed/shot/miskicked one into James path for him to calmly put away giving the IIs the lead.

If you have ever seen the IIs play before then you would know we don’t do anything the easy way so in typical IIs fashion we once again switched off allowing their striker to head in from close range and level the scores up. Both teams created a few more chances before the end with Hobbs making a couple of really good saves and Tommo heading one onto the crossbar but the game ended 4-4 which all in all was probably a fair reflection on the game, although the IIs could have easily won the game if not for the period to start the second half.

The IIs, now two games into the league are still undefeated albeit still without a win. Man of the match was unanimous and was given to Luke although there was positive performances all round.

It has been brought to the attention of the club that there are some potential inaccuracies within a previous match report: OTFC IIs v Mickleham Old Boxhillians IIs – 26th September 2015

OTFC would like to apologise unreservedly for any errors in reporting and would like to pass credit when due. It is felt that the great run down the left to set up Rhys’s goal was made not by Charlie, but actually by Dougie. It is also felt that Charlie’s headed goal was not direct from a cross, but in fact from a knock back also completed by Dougie.

OTFC would like therefore to correct these errors for the record and reward the source of the corrections with fines in the region of £1.50. Please note that sentimental messages seeking self-recognition (regardless of their merits) will not be well received by the Fines Committee.