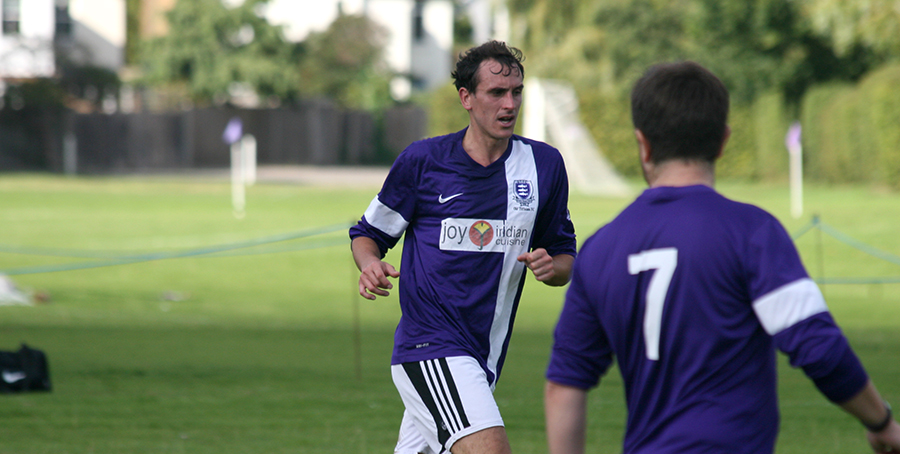 The weekend’s destination for the mighty all conquering Tiffs, was a location many believed should have beaten Kingston-upon-Hull, to be awarded the city of culture 2017. That’s right baby, we were off to New Eltham! With such an exotic location, and only having to field one team across the whole of the club, you would have expected hordes of wanna-be purple invaders to have descend. But alas, even with the mid-season loan of two big hitters from the I’s (one of them was big anyway), it became apparent that a bare 11 was all we had.

Last minute dropouts were understandable – Kuldeep could not make it, due in part for him having to stay in and sign for his 1 tonne, quarterly supply of hair product, and Kimber claimed he spent all night pebble-dashing the toilet bowl.

After a well coordinated warmup, Fuze declared “had enough of this, let’s just kick it HIGH”, much to everyone’s bemusement. A fairly open half an hour saw numerous chances for both teams. The wee winger wizard Colin, sent in a perfectly whipped corner. Keiran, having found space and out jumping his marker, decided to not head the ball. Thankfully Fuse ‘fox in the box’ Matthews was at the back post to tap it in – surprise and disbelief spread across the face of Nutty (who had come half way across London with his boots, yet refused to don the might purple shirt). A rock solid midfield pairing of Luke and gaffer for the day – Will – put in a stupendous shift. (Everybody was still inquiring if Dicky had found his pants). 0-1 quickly became 2-1 down, and we had the strong stench of defeat in our nostrils. However this ‘more than mere mortal’ bare 11 knuckled down. Joe continued to tear the right wing to pieces – a la Sonic the hedgehog  A beautiful piece of footballing interchange between Colin and Tommo saw Dave cooly put us back to two apiece. A well placed wink and a few romantic exchanges with the Ref by Will kept us in the ref’s good books – and it showed, by his incredibly accurate offside calls on our behalf. Even with cold and snood, a solid shift at right back was had by Tom. Hobbs smothered anything that might have slipped through. Big mention for MOM Mitch – Just like a 1940s spitfire squadron, he repelled all that was thrown at him. With only minutes left on the clock, a whipped in cross was met by a leaping Tommo, only for it to just glance wide.

Two-all was a fair result against a potential title topping team.

Luke’s solid last 15 at centre back was quickly put down with “don’t start that again!”

Off to the pub for pints!!