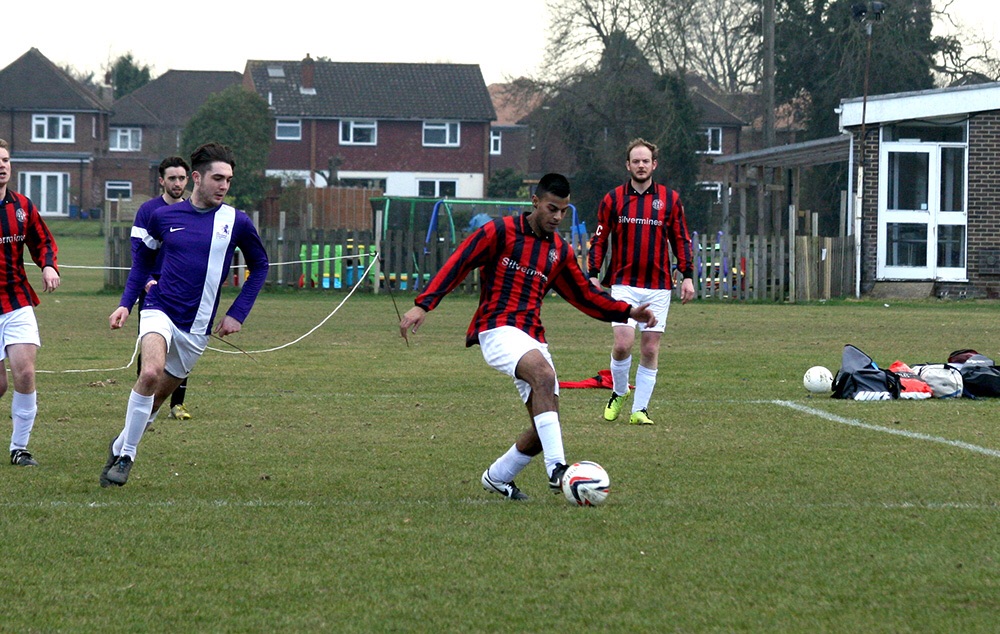 Tiffs strolled out to fortress Grists on Saturday afternoon in a confident mood, having seen off Old Sedcopians in the reverse fixture the previous week, in one of our best results of the season so far. With a full squad of 14 available on time (nearly), the mind games began early on with the oppo only sending out 3 players, until the rest of the squad arrived around 20 minutes later.

It was a cagey start to the game, and Sedcopians had clearly got the number of Matt after running his opposing full-back ragged the week before. After an innocuous-looking challenge which the ref correctly saw as a fair challenge, the full-back kicked out at Matt in the 3rd minute and produced a volley of questionable language to boot. Lucky to escape with a yellow, and Matt in particular looking confused at the lack of discipline so early on.

While last week was a display of midfield control and swift counter-attacking, this week was built on a rock-solid back 3 (all credit to Dicky “Brendan Rodgers” Bostelmann). The back 3 of Dicky, Luke and Mitch all were both confident on the ball and assured in the tackle, and despite Sedcopians holding their fair share of possession, never looked like causing us any real problems.

With questionable tackling and referee-abusing rife from the away team, Tiffs didn’t get drawn into the skirmish, attempting to knock the ball around tidily where possible. One of the few exceptions led to our first goal 2 minutes before half-time, where skipper Dicky dug out a wonderful 40-yard lofted pass (or perhaps a rushed clearance…), which Thommo gleefully raced on to and calmly lobbed the onrushing keeper to nestle in the back of the net. 1-0 at half-time, and the away side were ruffled.

The second half continued much in the same vein as the first, with the Tiffs full-backs helping out at the back and causing problems going forward effectively – Josh and Gary in particular put in a number of crucial challenges and interceptions, whilst also bringing out the ball from deep well.

It was clear that Sedcopians were getting wound up, and Cottee certainly helped the cause by running down the clock from around minute 46 – dribbling around his area, and taking his sweet time collecting the wayward shots from range that came in. Our keeper not only decided to turn up for the first half this week, but was also dominant in his area – claiming a number of tricky crosses, and acting as an effective sweeper when necessary. Whilst the aggression and physicality may have ruffled us earlier on in the season, today Tiffs stood firm.

Lady luck has also not been on our side in the last few months, from questionable penalty calls to red cards, this game we finally received some of our fair share in return. Dave dropped deep and played a clever through-ball to Matt, who beat his man for pace in the penalty area, but was (from my angle) tackled cleanly to knock the ball out for a corner. Though there were no appeals, the referee pointed to the spot and awarded the penalty. Whilst everyone celebrated this moment of good fortune, Dave showed he does have a clean pair of heels when he wants to, and sprinted at a speed Usain Bolt would be proud of to claim the ball and his right to the penalty. Despite a minor disagreement over who should take following Dave’s previous miss (fine), he stepped up confidently. Cool as you like, he sent the keeper the wrong way and tucked the penalty away brilliantly to give Tiffs that precious 2-goal advantage.

The rest of the game continued to be scrappy, but the defence continued to hold out for the clean sheet, much to the delight of Luke. His ferocious roar at full-time drew some bemused looks from team-mates and opposition alike.

A brilliant team display, but MOTM deservedly went to the ever-reliable Kuldeep. He not only battled effectively in midfield and provided an excellent shield for our back 3, but also marshalled the entire team, making sure the team held its shape and running the middle of the park.

A first clean sheet and back-to-back wins for a very long time – if we put a good run together, we can start climbing the table at the business end of the season. In the infamous last words of Steven Gerrard, “we go again”.