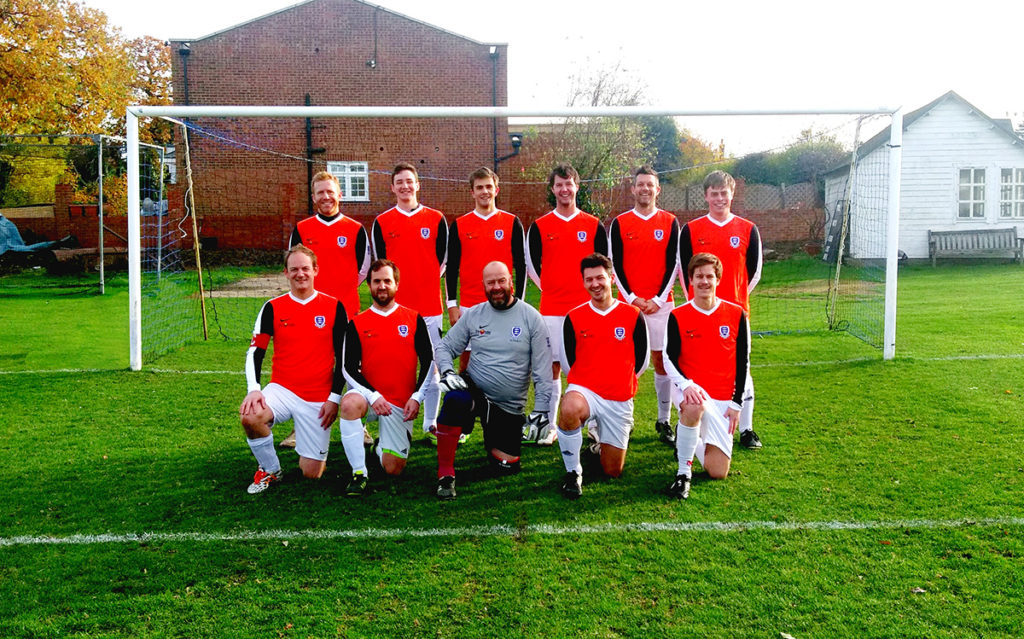 Editor’s Note: Match report compiled by Paul “Cottee” Cotterell, the first in 25 seasons of service to our great club!

It was a cold bright Saturday afternoon for our clash with Glyn at their Cheam ground. We turned out in our new away kit of orange with black and white sleeves which is pretty cool for a kit.

The game kicked off at a brisk pace with them on the attack nearly straight away in which we all defended very well with Tom and Dicky marshalling the defence. They were a good footballing side passing it around nicely or giving it the long ball with their quicker players running after the ball and causing us a bit of trouble which in the end we sorted it in one way or the other.

When we did attack we would mostly play it from defence through the midfield in which we had our new player Benedikt who fitted in very well to our style of play.

Our two upfront Tom and John Edwards hassled there defence, going on jinking little runs and our passing was pretty good to. Colin crossed it from the left and we were unlucky not to score , but on one of Glyns attacks a long ball broke through and they managed to get behind our defence and I had a one on one in which I’m sorry to say they got the better of me and we were one down mid way through the half. We didn’t let that get us down so we mounted another attack with Johnny running to the corner flag passing it around as he went to Luke and then we crossed it over but to no avail.

By half time we were still one nil down but in good spirits knowing we could get a goal it would be a whole different game etc.

We kicked of the 2nd half and were put under pressure, but we defended and got the ball away and went into attack with Colin on the left going round a player or two with his footballing skills and then crossing it into Tom or John’s path causing them some trouble but annoyingly their defence was pretty strong as the they has a centre back who never stopped shouting whatever he needed to say to get the ball of our attackers, by the mid way thru the 2nd half some of our players were getting a bit worn down , as Will fell over at one point and decided to have forty winks while he was on the deck, later I realised he had injured himself but he got back up and got stuck back in again. Our left back Tom had a few problems with their players but also how to do a throw on which the ref didn’t seem to know how to do either as he never said anything about it. In the 2nd half I only made a few saves as we closed them down and didn’t give them too many chances to shoot or score. I made one save when their forward got thru our defence but shot straight at me which was lucky for us. Andy our left back fell asleep while they were attacking once seeming to think I could do a Usain bolt and get to the ball before a younger fitter man would, I didn’t so I ended up going through him and I managed to get the ball out for a corner, which was lucky as others on my side said it could or should of been a pen!

But unluckily for us the same player I took out a while ago latched on to a long ball down the middle with our defence we were unable to stop him, he  managed to score which was really annoying as we’d been attacking really well. As time got on Glyn started to waste time at most opportunities they could, when we went on the attack thru out the game we played the ball across the pitch or around very nicely, but as normal we were very quiet unlike a lot of their players who were loud and happy to put it about. Our two up front today jinked the ball all over the pitch and played bloody well. The whistle went for the end of the game from our ref.

We might of lost this week’s game but we had a bare 11 against the league leaders who were a good side with 2 subs who came on in the 2nd half,  also a few of our players were carrying injuries by the end of the game. We should be proud of how we stood up and got stuck into the game as I am.