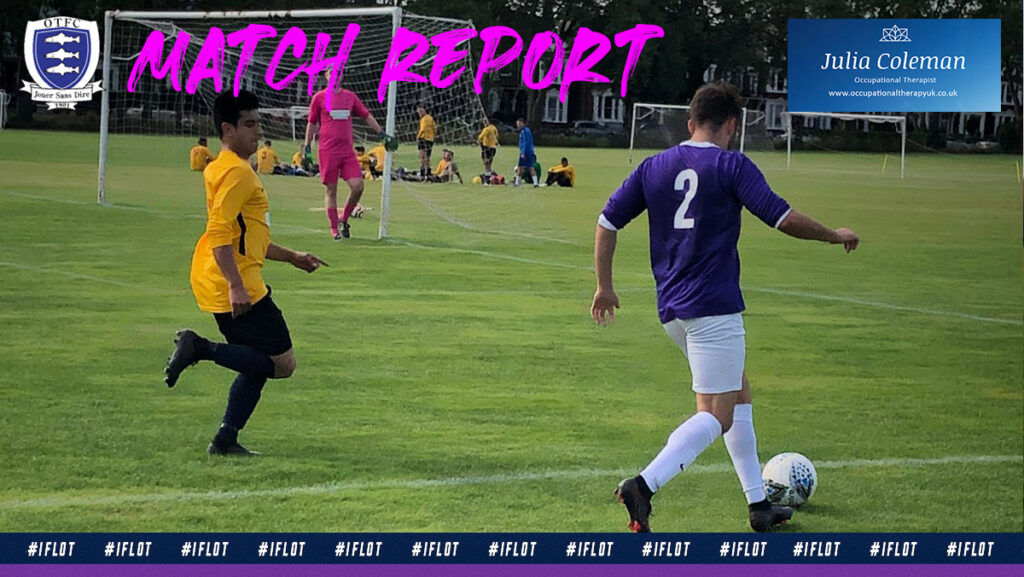 A handful of club debuts to report. New between the sticks was Tom Leggat, fresh from his weekly 200 mile round trip to don the famous purple of Old Tiffs. The freshly trimmed trio of Jack, Lewis and Alex who have slotted into the squad like one of Sam the Handymans dovetail joints, replacing the outgoing trio of The Khaj, 3 lungs Eggar and Flynn Min Son who had all been reported AWOL.

Also bringing down the average age of the squad were new recruits “Albanian” Marcus and “Actually” German Joe. New captains Bill and Ash commented that they were thrilled to keep hold of the services of the Ant Hill mob for one more season and it looks like the fearsome foursome of Lazer Sullivan on the right flank, the guilty feet of Harry on the opposite side, the freshly pierced Elwood in the middle and the no-longer-single Brilliante (apologies to the housewives) operating wherever he liked are ready to repay their new skippers faith.

There was an old, slow man in the middle of defence too, this was made evident when the new changing room playlist hit and the only song he knew was “Over My Shoulder” by Mike and the Mechanics, but kudos for nailing the whistling solo in the showers afterwards.

Thanks to a reshuffle in the higher leagues, The 3s had actually been promoted despite finishing 3rd last season. This reinforced their status as underdogs and once the game kicked off Shene looked to make their status as favourites count, with some neat possession and a few fairly hefty challenges. The resilience picked up by The 3s last season was paying off and the hours spent in the gym by Elwood and Brillante was evident as they won the midfield battle and constantly fed the ball out to newly Lazer-eye-balled Sullivan on the right flank. His pinpoint crossing causing chaos in the box for the Shene defence but no man in purple able to capitalise. Resident purveyor of the cut-in side parting and Emre Can look/play-a-like Alex had seen enough and ventured forward from centre half to cause chaos. Neatly heading home from the edge of the 6 yard box from one of Sullivans bullet long throw ins. 7 fans and a dog went wild on the sidelines as OTFC 3s opened their account for the season. 1 nil to the good guys.

As is always the case the 3s were brimming with confidence at this point which can only mean one thing. Some indecision at the back and a mix up between Leggat and Edgar led to a 30 second period of mayhem culminating in a Shene winger glancing the outstretched leg of the aforementioned Edgar and the referee had no choice but to point to the spot. Leggatt got two hands to it but it wasn’t quite enough to keep his sheet clean on this occasion. 1-1 and it stayed that way until half time.

The wine gums were out and the Mercury was rising. A sweaty second half began and perhaps the heat had gotten to a few players, the referee threatened both teams with the book as the fouls were totted up. The men in purple kept on plugging away, with balls over the top for the strike force of Lewis and Jack not quite paying off. Captain Ash was also one well-coiffed hair away from nodding in a potential winner.

It was a case of wake me up before you go-go for The Careless Whisperer, Harry, constantly on the Outside of his marker and given the Freedom of the left wing, he then decided to substitute himself following a plum-piercing clearance from the Shene fullback. Zeqiri filled in at left wing back earning himself the much coveted Out-of position fine until Harry declared that he may one day become a Father Figure and re-joined the action. It was his guilty feet that eventually got the better of his marker and the resulting cross cannoned off a defenders hand, clear and obvious according to the referee and we all know what happens next.

You bring your captain off the bench with seconds left of the game to take the penalty and…… Oh. Take note Mr. Moyes.

Not the case for Tiffs 3s however who have spent most of pre season preparing for this exact scenario. There was no panic as Brillante jogged off the pitch to be replaced by Zeqiri, who as expected slotted home from 12 yards to increase his successful penalty streak to nine. 2-1 to the good guys and another fine for Zeqiri as he duly subbed himself back off, signalling to the referee mid celebration.

At this point Leggat in goal made a save that I can’t even describe to keep the score at 2-1 and duly earned himself a lot of MOTM votes.

A few minutes left and Captain Ash was doing his best impression of Jamie Carragher during Soccer aid. The purple wall was up and Tiffs carefully managed the game out to secure a brilliant opening day victory. Curry and Shandies were enjoyed by all and we look forward to another thrilling season of 3s football.

Player of the Match brought to you in conjunction with Julia Coleman Occupational Therapist: