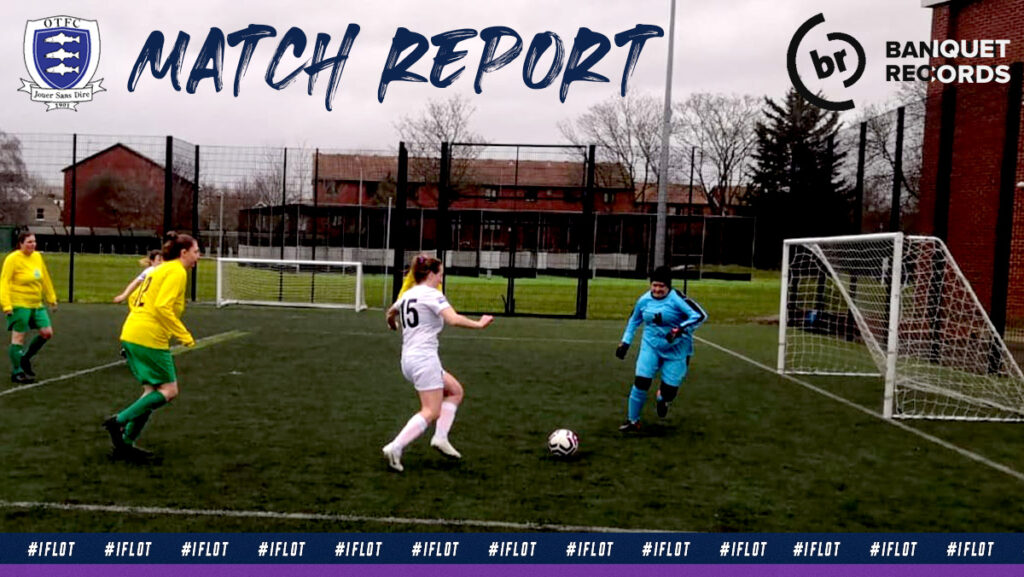 OTFC Women continue to provided us with a strong and dominant display of football in the Surrey Flexi league. Running out with a very solid 12-1 win over Hersham Mojitos WFC. Hersham put up a solid performance, at time frustrating the efforts, with a strong block in front of goal.

Sophie Ramsbottom, OTFC’s dynamic captain was the catalyst in opening and closing the scoring in the first quarter. The first goal, after three minutes, being a carefully placed shot past a keeper that was left static. Sophie’s second and OTFC’s third was a deft header from a long throw from the energetic Matilda Schwefel. Matilda’s strength and covering speed allowed her team mates to get forward, knowing that cover was there.

Aurora Sullivan added to the scoreline pouncing on a loose ball following pressure on the Hersham goal, to side-foot home from close range, topping off her contribution to a fine team effort.

There were several periods of intense pressure on the Hersham goal. The most majestic being a mazy run by Alanna Turner, bringing the ball out of defence but only to see her progress snuffed at the last.

Lauren Turner, worked tirelessly to close down Hersham to stop them the comfort of bringing the ball out from the back. This allowed OTFC to pick on the second ball when played out long.

OTFC started the second quarter looking to pick up from where they left off. But out of the blue, two minutes in, a long clearance caught out the Tiff’s defence as the up and over from the half-way line looped over, and into the OTFC net – 3-1!

OTFC found a new spirit and were now starting to interchange, with three goals in quick succession: Sophie, Sophie, Ana – the goal scorers of that triplet. The common theme of these goals was the quick inter-change ending with the ball back into the centre of the Hersham goal for a simple tap in.

Fiona Leggat, ended the half with a well taken goal following a long through into the Hersham box.

In the third quarter OTFC were facing nine. This provided a test as Tiffs probed to breakdown the solid formation in front of them.

Amirah Rahman swapped out of goal after a solid performance. Providing the voice at the back that kept us in shape.

Chloe Binnington, finding the game frustrating, was only in this quarter able to pick up the first of what would be her four-goal tally. This was a smart step through the centre, finished with a carefully placed shot pass the keeper. A contrast to a number of attempts earlier which seemed to be attracted by the magnet of the keeper. As the call from the coaching staff often came: pass the ball into the net! Thunder-shots from Leggat, Ramsbottom and Thomas often demonstrating the need for accuracy over power.

Binnington is not just about scoring goals. She provides a lot of support in defence; tracking back to break up attacks, or her ability to ghost past the opposition defence to open spaces or create chances for her team mates. It was a Binnington, who won the corner, that was converted by Matilda Schwefel, from a move that came from the training ground. A well worked set piece corner met firmly by Schwefel added to the OTFC goal tally – 9-1!

Tiffs came out in quarter four looking to close out the game.

Two minutes in, Binnington added to her tally, with some good inter-play with Fiona Leggat, before slotting home.

Gilly Thomas, making her debut for OTFC, worked hard up front. While not on the score sheet, she was instrumental in winning the penalty that was calmly converted by Binnington, putting the ball to the keeper’s right.

The goal of the game came eight minutes into the quarter. Leggat’s vision saw her deliver a lofted pass; from the half-way line, right to left, anticipating the run of Binnington, who latched onto the pass in the Hersham penalty area. Her class was seen with a perfect first touch to bring the ball down, her second, without breaking stride, saw the ball in the back of the net. What a goal!

Our thanks go to the referee: Pei Li Kew