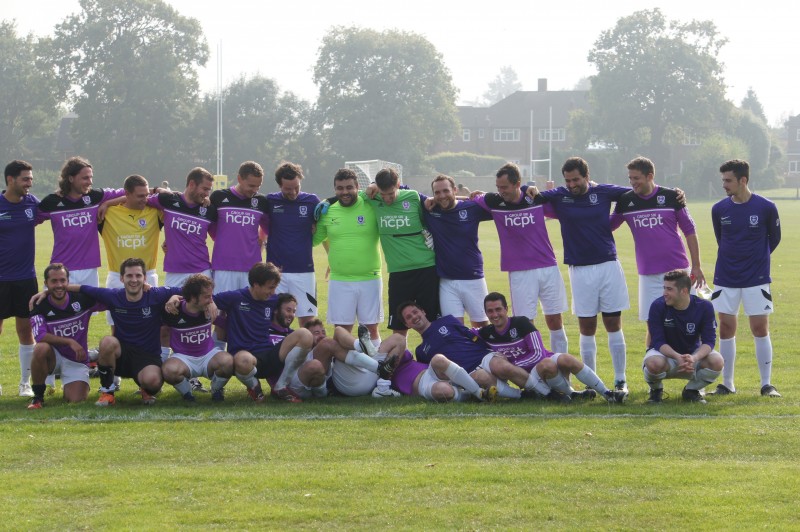 After being abandoned by both team captains, the 4s were looking forward to being unleashed on Wandsworth Town without the height restriction that Charlie Hughes usually places on the team.

Wandsworth pulled one back soon after with a lucky set piece. Then, after stunning Tiffs with another equally lucky set piece, they were in the lead 2-1. Wandsworth kept attacking tiffs, who were now on the back foot. There was a superb defensive display from George Mitchell and Haitham Khorma – who were literally throwing their bodies in the way of the ball to stop it hitting the back of the net. Wandsworth saw this as an opportunity and fired the ball directly at Khorma’s hand as he was picking himself up in the area and gave one of the weakest penalties that has ever been seen at Grist’s. Nader Meradji stood strong in the middle of the Tiffs goal though and put up a strong hand to stop the penalty that the defence then swept away. Tiffs went into the second half down 2-1.

After a rousing half time speech by stand in captain Hinton and taking inspiration from Meradji’s save Tiffs took to the field with a new-found determination. With echoes of “Eye of the Tiger” coming from the changing rooms Tiffs started strong and kept up the pressure for the first 20 mins. Eventually finding the breakthrough, Hinton taking a wayward shot at goal that fell perfectly for Grant Calder to cooly slot home. 2-2.

The come back was on! Wandsworth couldn’t keep up with the waves of Riffs attacks. Hinton shooting from outside the box narrowly missing the bar, Knuchel-Takano shooting several times forcing the keeper into some solid stops before Lewis Baister put in a cameo appearance and struck the bar within 5 minutes of coming on.

Another lucky Wandsworth break that Calder, filling in at right back, cleared … straight towards his own goal, a shot that any IIIs striker would have been proud of. Luckily MOTM Meradji was on his toes and, despite misinterpreting the pass back rule not including wayward clearances, leapt off his line and HEADED the ball away from the top corner of the net to safety.

Celebrations were short lived though as Wandsworth took advantage of a tired defence and followed up a shot that Meradji had tipped on to the bar with an easy finish. 3-2 to Wandsworth with four minutes to go.

They say it’s times like this, when you’re facing a defeat, that you turn to your captain for inspiration, for some fighting spirit and for some kind of motivation. Stand in captain Hinton attacked Wandsworth from the centre spot and took an inspiring shot from 30 yards out. The team watched his effort soar over the edge of the box along the ground and trickle into the keeper’s hands.

Fully inspired, Tiffs pushed hard for possession earning a throw in about 20 yards out. Khorma threw to Martin, who cooly turned and put in a dangerous cross, Hinton ran in at the back stick and, with the last kick of the game, slotted it past keeper to give OTFC IVs a well earned draw.

MOTM Nader Meradji for his penalty save and stunning headed clearance.