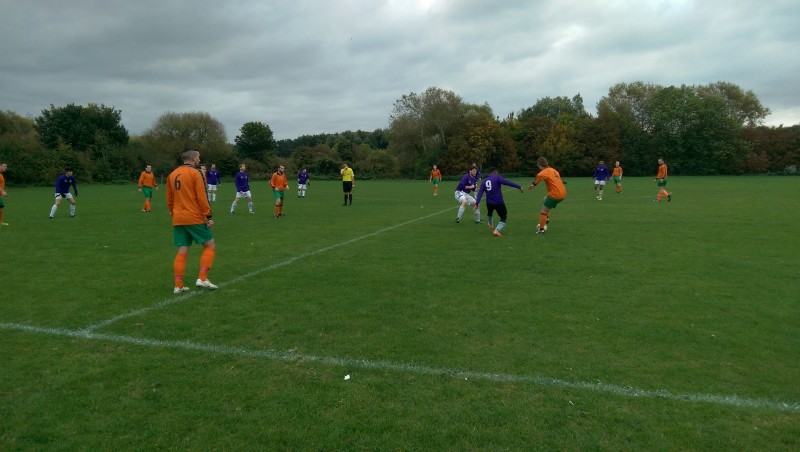 OTFC IVs kept up their impressive unbeaten run in the league [editor’s note: not counting the first league game of the season] with a first ever victory. Heroic performances from all involved meant a dominant team came away with the win, the final score does little justice to show the chances created and how well everyone played. Today’s win was against Old St Mary’s IIIs, who before the game were just one point above Tiffs in the league, they played an honourable and fair game.

Most of the team turned up early for the alleged 2.30pm kick off time, only to be told by the referee he thought the game was kicking off at 2.00. After some fierce negotiations kick off was arranged for 2.15 and that left the IVs ready to field a team of 10 players. Luckily late arrivals Bernard Knuchel Takano, Austin Arjun Kugathas, Ben Lamble and Joe Whittle turned up at kick off and the game got underway with a full 11.

Tiffs started brightly, taking control of the game from midfield. Continued pressure and good play didn’t see any breakthrough in front of goal, but we did have a number of near misses, something that would become a theme of this game.
Despite Tiffs dominating performance it would be St Mary’s that took the lead with what was either a lucky pot shot or a misguided cross creeping in at the back post. The goal didn’t dampen the team’s spirits much and we continued to press.

Some inspired substitutions by captain Charlie Hughes, bringing debutant Whittle into the game, he had barely been on the pitch for 5 minutes before seizing a goalscoring opportunity from a Lamble corner to the back post, Tiffs were level and back in the game.

The half time whistle came with the scores tied at 1-1. Tiffs had the majority of possession in the first half and had won at least seven corners.

The second half started in the same vein with Tiffs playing well, winning corners and missing opportunities to take the lead. A counter attack from St Marys saw a diagonal cross-field ball from the half way line into the penalty area, Haitham Khorma, playing left back, energetically chased the ball to the right-hand edge of the penalty area, arriving slightly after the St Marys striker and with no choice but to slide in and unfortunately floor the opposition player [editor’s note: no choice?]. The referee immediately called the penalty and no Tiff player contested the obvious decision. The St Mary’s striker stepped up to take the penalty, giving Nader Meradji the eyes to go to the left, Meradji knew which way to dive but despite this was unable to repeat his penalty save from the previous game and St Mary’s retook the lead.

Tiffs regrouped quickly and after some well worked play from the left of midfield Knuchel-Takano broke through to score a great goal and bring the game back to 2-2. While the score was tied, Meradji made a heart stopping save, tipping the ball over the bar and keeping Tiffs in the game. It wasn’t until deep in the second half when a stunning forward pass from the centre circle by Lamble allowed Knuchel-Takano to ghost in behind St Mary’s backline and dink a goal that give Tiffs the victory their performance deserved.

The game saw a number of missed clear goalscoring opportunities, including, but not limited to, Bilal Morad’s underhit pass to the opposition keeper, Kugathas and Mou Alhashem passing to each other instead of shooting, Grant Calder heading over the bar from on the goal line, and Ciarán Morris’s inability to move his leg quickly enough to direct a cross towards goal [editor’s note: this chance is especially well described]. All of which were out-done when in the dying moments of the game a clear cut, open goal, scoring opportunity, after a glorious ground cross from Alhashem, was blazed over the bar by Simon Titcombe from 5 yards out [editor’s note: 3 yards]. The misses may have been disappointing but it didn’t dampen the spirits of the team as they celebrated the final whistle and taking home the 3 points.

Outstanding performances from Ben Lamble and Joe Whittle for their goal assists and special mention to Charlie Hughes for his goal line clearance, but man of the match award goes to Bernard Knuchel-Takano, for his brace and for showing great versatility playing midfield in the first half and striker in the second half.