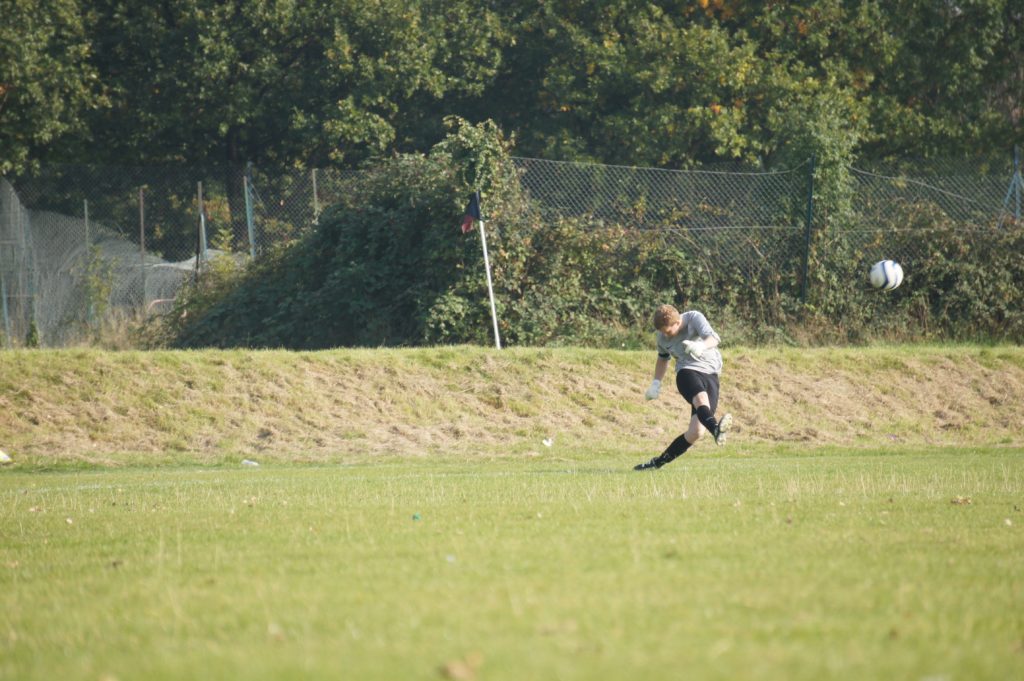 After a revitalising 4-0 victory the previous week, hopes were high for the jubilant Ts against Southgate Olympic in the AFA Challenge Cup, yet bad habits were quick to resurface as with only moments before kick off the purple heads numbered less than 11.

Despite the lack of a warm-up, the football played by the Ts was impressive and Southgate Olympic, although being 3 divisions above the lowly Ts, were unable to get a foothold in the game.

This was not a usual Ts start. Neat, pretty triangles of passing teased Southgate. Intense pressing and the will to succeed pushed the Ts forward. Tom Scott even held the ball up, looking for a pass to play. An unlikely victory was in the offing.

The Southgate players looked mean. If the game were decided on looks, then Southgate would have already been making their way back to the delights of Enfield, yet unfortunately 90 minutes of football, and the spot of wrestling decides an old boys game.

The Ts passing was sublime for the first 15 minutes but then, with a cross field move culminating in a confident pass back to keeper Seb, the Ts captain decided to take his time distributing the ball out. Was he to spray it wide to Dave Harry and help launch a blistering attack down the right? Or potentially a return pass to his left back Joe, allowing a defence-splitting ball from deep? The answer was neither of these. Unfortunately, whilst trying to decide where to pass, Seb had continued to step backwards and backwards and backwards until he was close enough to Hampton Court Way to hail down an approaching 111. The ball was gobbled up and smacked into the gaping goal. Ts stood in disbelief.

There was not enough ‘Sorry’ to placate the home team, yet Owens in his tactful way tried to apportion blame amongst the defence in the hope of making things a little less rough on Seb*.

* soon after the final whistle Owens would inform Seb that it was entirely his fault.

Ts were determined not to be disheartened, even Steve became vocal, demanding it be ‘stroked about and pulled back’. The good football was not to be ceased either.

The Ts were only down for a few minutes. After 4 years of trying, eventually one of Tom Scott’s turns finally paid off and he left the centre back for dead, allowing a free run in on goal. As the keeper closed the ball down Tom squared it to his forward partner Charlie who slapped the ball into the net. Mensa’s loss was our gain and the two Tiff forwards celebrated as if a Hollyoaks omnibus was about to start.

1-1 at half time would have been unfair to Tiffs after all the great football they had been playing but disaster was to strike again! Quite how the second went in for Southgate is unclear but the words ‘lettuce’ and ‘hands’ have been used to describe the goal.

2-1 down Tiffs took the 15 minute respite to regroup, Harry utilising the time to apply some more denture adhesive.

The second half didn’t start as well as hoped with a couple of quick goals being conceded by the Ts. Quite who was at fault for the goals is unclear but the words ‘Princess’ and ‘Diana’ were mentioned when blame was being distributed.

A 4-1 loss didn’t do Tiffs credit as a lot of good football was played by the home team, the dastardly oppo proved just too fit and our keeper just too clumsy.

A pleasure to welcome back Owens into the fold and an even greater pleasure watching the younger Matthews brother get booked for whining. Get to the game on time next week you lazy fatsos!

A special mention must go to Ollie Robini, who rightfully claimed the MotM award.