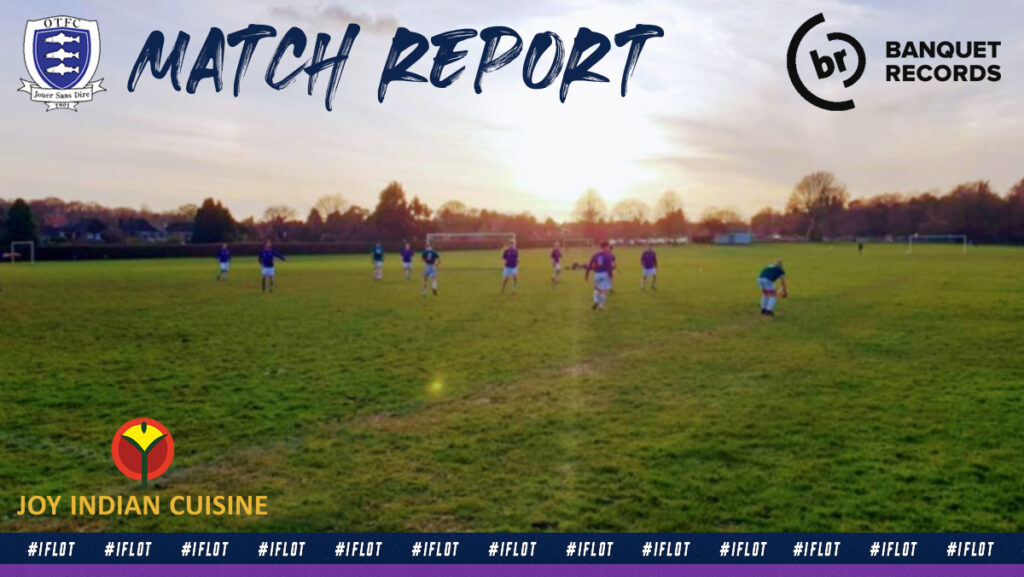 There’s a famous quote from The Mighty Boosh where Howard Moon whispers “Wind my only friend” only for the wind to respond, “I hate you!”. And it was this hostility that the wind brought with it on a very fresh early kick off against Wokingians II, where even being Baltic would’ve been warm.

Being a blustery day was not helped by the fact the referee was late, clearly brushing up on their foul throw rules in the car park and the fact that Seb decided to spear tackle Colin to the ground during the warm-up resulting in the home side’s only sub nursing a dead leg just before kick-off.

The Purps started the game ok, trying to pick up pockets of space and get the passing game going, momentum shifted between the teams in the early stages as they tried to gain the edge. With all the best intent, conditions did make it hard and so Tiffs final ball was poor and good position and possession kept being wasted.

In a first half where Steve Gooding was penalised for not one, not two but at least 4 foul throws, the pre-match revision coming in handy for the ref, the home side we left astonished when the Woking right back “got away with one”, fed the centre-forward on the corner of the box for a low cross and a tap in. The away take a one nil lead.

Tiffs bounced back again picking up possession but lacking in final third quality but finally the high press clicked, with the midfield robbing the ball feeding Hucks on the right wing who fired a low ball across the six-yard box for JJ11 to tap in the equalizer. Sadly, halftime came as Tiffs were getting on top of the away side.

A quick halftime as, you know, it was oppressively windy and cold. The second half starting in a similar pattern as the first, both teams trying to wrestle control of the game but lacking in quality.

Then for a weird 10 min spell, the home side had a brain fart defensively. First, a speculative freekick was dropped by Seb and tapped in. Then a few minutes later, the Wokingian’s centre-half intercepted a ball inside the centre-circle, looked to play a through-ball to his strikers who had ventured offside but he latched onto his own pass unchallenged and slotted home, 1-3.

Tiffs responded, JJ11 started to latch onto some through balls but only some combative defending from the away team him from doubling his tally. However, a rush of blood and another foul throw led some JJ11’s anger to spill out and during his next throw screamed “are you watching now” in the referee’s direction.

As the game slowly came to a close, Tom Bradley swung in a corner and Sandy ghosted in unmarked at the back post and volleyed into the roof of the net from 6 yards. Game on. The brave purple boys started to heap heavy pressure on the away side and they thought they’d manage to score a late equaliser only for Hucks to be called offside. Shouts of “how can you see that from there” aimed towards the referee stood in the centre-circle from stand-in skipper Kimber to which the retort was; “how can you”, fair play. Sadly, all credibility was lost as all the ref cared about next was were the pizza’s already delivered!

A brave 2-3 loss which leads the author to believe that The Purps might not be able to do it “on a wet and windy night in Stoke”.