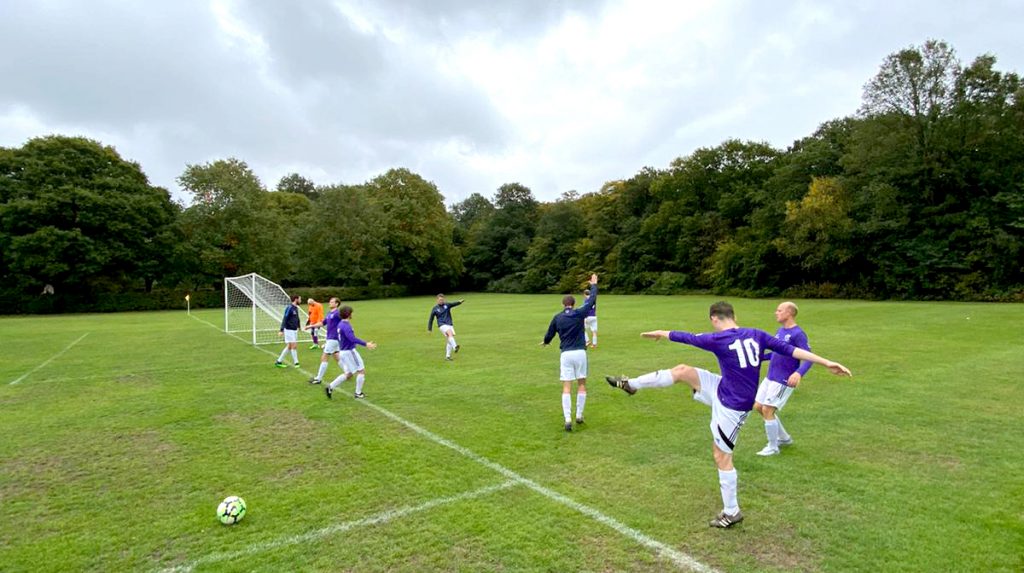 A return to the fateful pitch and fixture for the 2s where previously James Kimber handballed it on the goal line and went down clutching his face. It was, naturally, going wide. [NB: this confirms there is precedent]

A spritely squad, arriving early by their own standards and having warmed up confidently, started with a buzz. Some great pressure all over the park within the first minutes led to a quick early goal for Tiffs. A booming throw into the box from Dan Hogg, flicked on by Greg Nutt, leaving Tom Nichols free to nod in from close range. Credit to Dan Jackson for telling Nichols to stand there in the first place.

A few more clear cut chances in the moments after looked good for Tiffs, but the lead was not to last. The men in purple were caught out holding the ball too long at the back, trying to draw a foul that was never given – not often a wise tactic at this level of football given lack of VAR – and the ball ended up after a series of ricochets in the bottom corner.

A few more missed clear cut chances, and despite best efforts from captain Joe Yates to corral the morale, panic set in just before half time. A dubious free kick was awarded to Wandsworth in a dangerous position, headed towards goal, only for an intercepting Jackson to make the sweetest of contact with it, and power the ball into the top corner of his own goal – genuinely ripping the net from its fixtures. He was informed at half time, much like Kimber’s incident here a few seasons ago, it was going wide in the first place. 2-1 down at the half.

A rousing team talk followed and the men in purple brought the intensity instantly – Ben Williams dispossessing the midfield straight from the kick off, providing a tap in for Thad Umrigar to level the scores. Less than five minutes later after more continued pressure, Yates found himself through on goal with Umrigar an option to his right. Yates had clearly misplaced his selfless streak and thwacked it straight at the keeper’s face – still somehow finding Thad for his second tap-in from a tight angle. Purps in front 3-2!

Fitness struggles started to show as the game wore on after 60 minutes however – sluggish movement, poor decision making, lack of communication. A missed header at the back and their striker was clean through to chip over keeper Cottee’s head. Continued attempts to play the ball out from the back started to show their frailty. Too many times Wandsworth were able to pick up possession in the attacking third, grabbing two more goals before the end of the game: one an absolute rifle into the top corner and the other a lob over the keeper from 40 yards.

The Tiffs’ performance had some really positive notes – great pressure for a lot of the game, good passing in the middle of the park and three goals scored. Sadly, the team discovered they were their own worst enemy, gifting at least four of the goals to the opposition through sloppy decision making. We go to SE London next week for a classic clash with Old St Mary’s II. Big improvements expected. Two games in – won one, lost one.