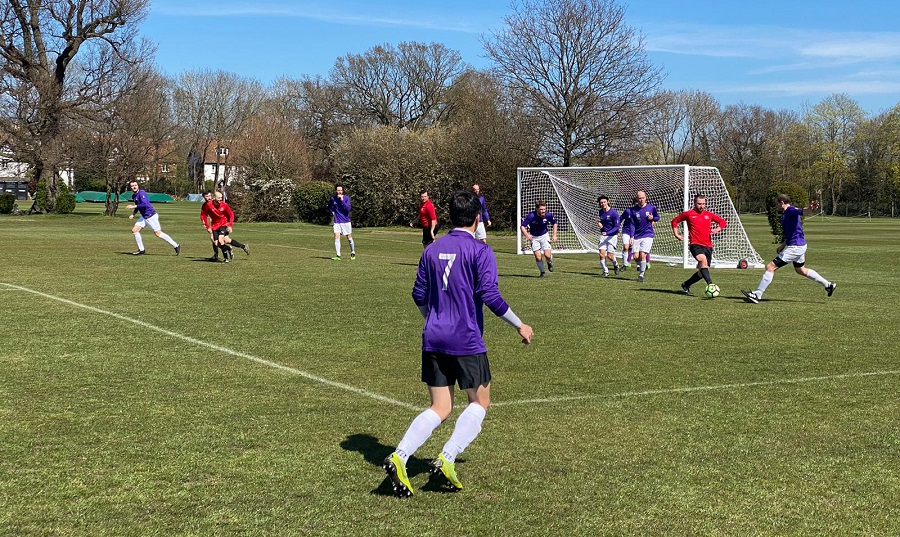 After a lengthy consultation with the various fan groups, OTFC 2s turned down Real Madrid and Barcelona’s invitation to join the European Super League on Friday. The team deciding to remain loyal to the glamour and prestige of the AFC Division 4 South.

Saturday’s sunshine brought out two new blossoming flowers of football in the form of Justin and Ash. An unusual warm up and with a decent turnout of 11 players, one of whom could no longer sprint or kick the ball with his preferred foot. Tiffs got off to a promising start in their trademark pear shaped Christmas tree formation.

Decent passing movement in the opening 10 from the purps was capped off with a decent cross from Ben down the right flank met by Justin. A man down under with a finish that was out of this world from 5 yards with his first touch of the game. Modest celebrations ensued; Tim Cahill stand aside.

Tiffs dominated for the next period by building out from the back 4 with Andy, Stuart and Steve seeing a lot of the ball deftly brought out from goal kicks. Dicky, Dan, Andy and the Doc looked solid as a rock.

A beefy battle in Ben and Bambi supplemented by TWC kept the whole of the borough of Wandsworth quiet until a gravity defying bicycle kick found the back of the net for the set piece specialists, 1-1. Steve quickly roused the team with a feather light deflection to a shot come cross smashed into the Wandsworth goal to make it 2-1.

Come half time and with the sight of Thad a mere 2 hours late, the omens were good. Ash slotted in up top with more girth than a mighty oak lending a physical edge to the graceful purples. Tom Marshall-Mather’s team talk advised the defence that they were doing great before changing them up entirely. But OTFC would concede early in the second half with a grubber into the near post down the left side.

Steve again roused the team with lightning feet linking up well with Joe and Thad but Tiffs would concede again from a scrappy set piece scramble and an uphill struggle to get back into the game.

Thad’s redemption was assured when he stepped up with a goal at the death to salvage a point in a game Tiffs should have won. Honours even at the death and MOTM awarded to Steve Leung for a great performance. Lots of positives to be had for OTFC to take into the remaining games of the season.