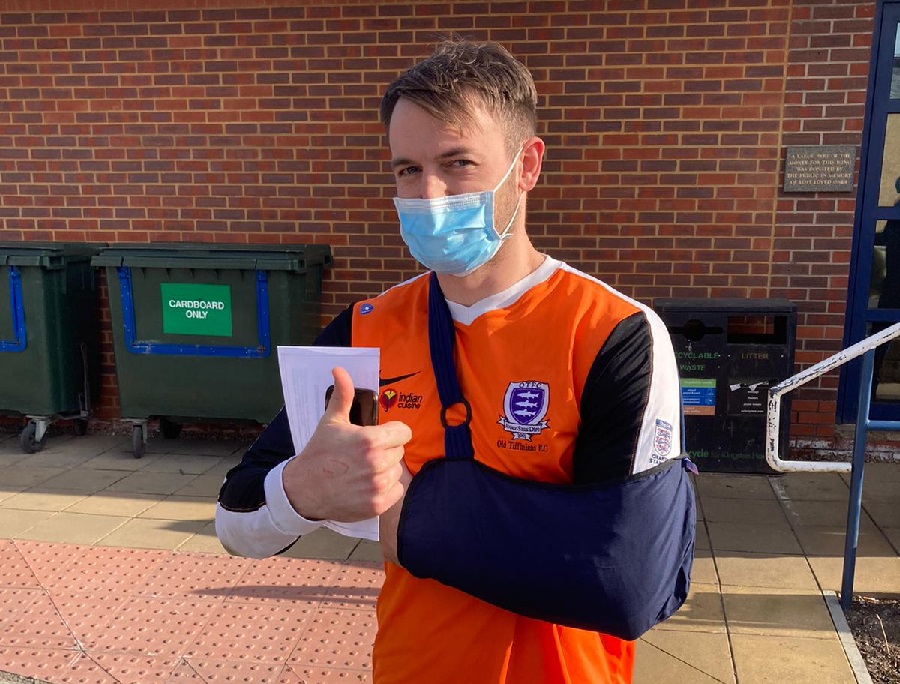 When the team sheet was announced for the boys’ return to 90 minute football matches, notable absentees from the back 4 and an array of attacking talent meant one thing was certain: goals were incoming. Which end? Who knew. But they were coming.

A beautiful day at Grists set the mood. Sunglasses were worn upon arrival, goalkeeper gloves were trialled as shin-pads (disclaimer: actual shin-pads were found prior to kick-off), and a minute’s silence for the late Duke Of Edinburgh was observed.

The first half saw a usually physical Glyn Old Boys team allowing Tiffs the lion’s share of possession, and the good guys in purple (orange) were popping the ball around the pitch in a way not seen since the post-lockdown restart. The only attacking threat from the opposition came from set pieces and long throws, one of which appeared to bounce (quite loudly) off of Enright’s head and into the back of the Tiffin net. Luckily, to the bemusement of pretty much everyone on the pitch, the referee declared that the ball had sailed straight in, this lucky break serving as a wake up call to the home team to get into gear.

Half-chances were had for the remainder of the first 45. A late throughie from Hucks found the late run of Bettis, who calmly slotted the ball past the keeper, only to be ruled out by a timely offside flag. Left wing Joe and right wing Joe (positionally not politically) were giving their full-backs a torrid time, the defence were winning aerial duels, and midfield battles were going our way. Despite all this good work however, the boys went in 0-0 at the break.

The second half began and the home team were so far on the front foot they seemed almost off balance. Acres of space and more time on the ball than they knew what to do with, half-chance after half-chance was carved out, crosses were put in and through balls were consistently slightly overhit. The returning Alan was getting involved heading a cross just wide of the back post, full backs Goodings and Robini were carrying the ball deep into opposition territory, and it seemed like a breakthrough goal was a matter of ‘when’ rather than ‘if’.   The relentless pressure culminated in a promising through ball to Cripps (model-J) who found himself one-on-one with the on-rushing keeper, who proceeded to collide with the striker, sending him for a nasty landing which immediately did not look good. Fears of a dislocated shoulder or broken collarbone were discussed (with the latter confirmed by a post-match trip to A&E and photo evidence on the WhatsApp group), and after a lengthy interval the game resumed with 6 minutes left on the clock. The home team appeared to have run out of gas, and the forecasted goal fest ended 0-0.

Beers in the sun and some exquisite games in the park raised the spirits slightly, but the overwhelming feeling of a missed opportunity was undeniable. The level of performance however was encouraging, and the boys go into next week’s game with high confidence as their quest for a European Super League position begins.

Man of the match brought to you by Entocycle