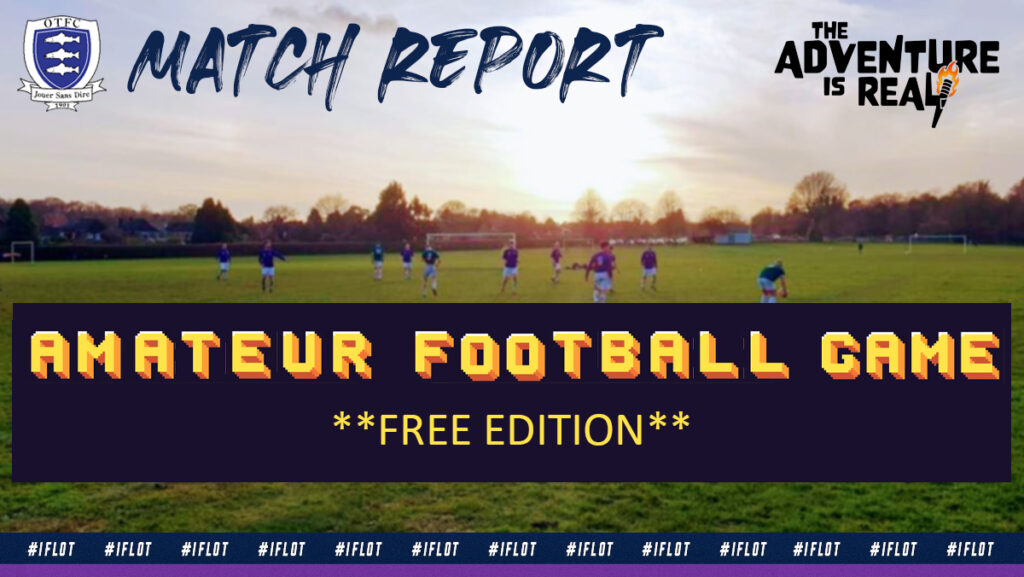 You have chosen to play – Amateur Football Game **FREE EDITION**

14 players – you will be playing as Old Tiffinians Football Club

Old Tiffinians FC are an amateur football club playing in the AFC Leagues, their home ground is based in East Molesey. Old Tiffinians FC are on the up with multiple sponsorship deals signed, an ever expanding club base, a new women’s team and an additional veterans squad added this season. For your mission to be a success you must defeat the OPPOSITION (Sinjuns Grammarians FC) ensuring Old Tiffinians FC league success to match their commercial success. This will take you one step closer to your personal aspiration of managing a Premier League football team.

You select your live action performers:

You select “BEN” as captain

Old Tiffinians FC seem to gain momentum (and confidence on the ball). “BEN” and “WIGHTWICK” start to take control of the Old Tiffinians FC back four. Steady marking, close football, playing it out from the back sees an excellent passage of play, “GREG” and “BAMBI” are everywhere, feeding “STEVE” on the right and “KHAJ” through the middle. Link-up to the striker and wingers remains loose in attack, however, occasional glimmers of Old Tiffinians FC’s ability starts to shine through.

The game seems even, a defensive masterclass starts. Suddenly, however, Sinjuns Grammarians FC take advantage of a break down the left, Old Tiffinians FC are seemingly in control however “DICKY” has not seen an overload. Sinjuns Grammarians FC play the ball dangerously through the box, seeing the problem too late, “DICKY” gambles on Opposition 11 the ball however goes to Opposition 9 and the ball is in the back of the net.

Disaster! You panic slightly, your aspiration of managing a Premier League football team looks to be a little more complicated that at first thought.

PLOT TWIST – Live action performer “FLYNN” has only one shin pad. You have two options:

Chances in the game start to come thick and fast, both Old Tiffinians FC and Sinjuns Grammarians FC are looking dangerous. There is some lovely play on the left side of the pitch, it looks like Old Tiffinians FC are on the brink, having soaked up pressure throughout the first period Old Tiffinians FC set-up once again from the left. The ball is played into the box, there is a kafuffle, “KHAJ” pounces and the scores are even.

Play resumes with a period of football spent in the middle of the park, there seems to be a stalemate as the ball is gained and lost between the teams without much danger.

BREAK – NOTE TO PLAYER – Clock pauses for 5 minutes, please ensure your computer has battery life for another 45 minutes, you have time to regroup, think about your next step and make any required changes

You curse that Amateur Football Game **FREE EDITION** does not have a “Pasta” or “Jellybabies” option.

PLOT TWIST – enter “MAN IN BLACK”… “MAN IN BLACK” allows goal to stand in breach of “THE RULES”… You must remember you are playing Amateur Football Game **FREE EDITION** and cannot afford PREMIERSHIP FOOTBALL GAME… You despair that VAR is not present.

This time your panic hits a new level. You decide to change things again: Your dream of managing a Premier League football team is now on the brink of disaster.

You take the opportunity to use two of your three tokens:

Your objective of managing a Premier League football team now looks beyond reach, surely Sinjuns Grammarians FC will score, they may be on the half way line, but it is one-on-one.  In abject desperation you look at your in-game options and spy an option you had not seen previously “DUBIOUS FOUL”… out of character you select “DUBIOUS FOUL” and are met with further options PLEASE SELECT PLAYER… you look at your list of players “WIGHTWICK” is selected without another moments thought.

Old Tiffinians FC remain on top in the closing minutes, “DAN” takes his position once again for “LONG THROW” the ball is launched, “DICKY” heads down and right Opposition 1 makes a save just as live action performer of the moment “WIGHTWICK” pounces to take the rebound over the line.

You are too excited, the dream is back on – ACTION REPLAY OPTION

Alas, it is too little too late.

GAME OVER – Sorry, despite coming very close, you have not won the game – you remain in charge of Old Tiffinians FC, you have one token remaining to achieve PREMIER LEAGUE FOOTBALL GAME status without paying full subscription.