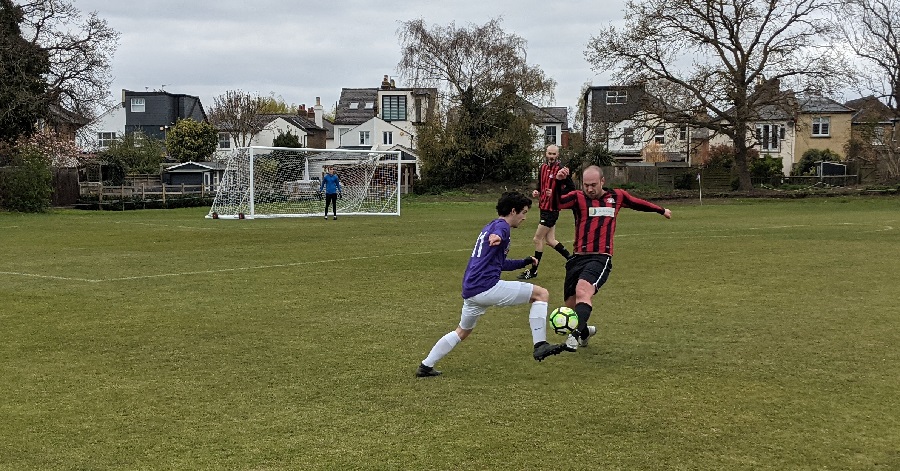 It was the best of games.. and then it was the worst of games. OTFC II XI hosted the travelling Sinjuns Grammarians III to fortress Grists for a 120-minute double header – a testing first fixture back after the COVID hiatus.

Familiar names of Tom Wightwick and Danny Leach returned to the side to bolster a 15-man squad that sought to go the distance in this testing affair. A strong start from Tiffs saw them dominating position from the start. An early free kick on the edge of the box, flicked on from Joe Yates resulted in the ball spilling free to TWC at the back post who spanked an impressive strike past their keeper – giving the good guys and early 1-0 lead. Promising possession play throughout the rest of that half gave Tiffs confidence, with a back four of Bostelmann, Jackson, Dickenson and Wightwick holding firm throughout. A standout display belonged to James “Fuse” Matthews who had volunteered for the No1. Jersey. Fingertip saves galore provided a solid influence behind the back four.

Continued pressure and possession into the second half gave Tiffs a further opportunity when Steve Leung was bundled over in the Box. A penalty was given, which Leung struck home with confidence. Tiffs held on in a confident fashion to draw first blood in this double-header.

The first game finished 2-0 to the good guys.

Into the second game, confidence was running high, only matched by our complacency.

Looking fresher and hungrier, Sinjuns began to grab more of the ball and press Tiffs’ back line. With their considerable height advantage, it was only a matter of time until tiffs were out-jumped to a looping ball – headed in by Sinjuns.

A second un-saveable goal from Sinjuns in the second half knocked the stuffing out of Tiffs who had up until now looked to be in the game. Promising forward drives toward the end of the game felt they might create something, only for Steve Leung to have half his knee skin removed by the treacherous Grists turf following a number of “solid” challenges. Not even Stuart Breck’s best Alex Lacazette impression and our fine collection of pirate beards in midfield could muster a come-back for a team that began to look down in fight.

A final Third headed goal for Sinjuns from their 7 foot 2 centre back capped off a disappointing second game for the good guys.

Overall not an unfair pair of results, and a good warm up for the rest of the season.