Tiffs (in) White and the Seven Goals

Events in this fairytale of a match report are most definitely not in chronological order.

Once upon a time, a squad named Old Tiffinians – a.k.a Tiffs (in) White – lived at Grists fortress with their Manager, the Handyman, but had to travel to Reigate at short notice. Their captain had always said to them that they must be fair to everyone at court.  Said he, “People come here, to Grists, when they want to lose. The people need us to win the league.  Nothing is more important than winning the league.”

Reigate, Tiff White’s opponent, didn’t care for the Handyman. At the first chance, they went to their Magic Manager.  “Manager, manager, on the sideline,” said Reigate. “Who is going to win this game?”

“Tiffs will win this game!” said the Magic Manager.

“What?!” yelled Reigate. “No one will win but I!  Reigate must finish top of the league – you know that. Who will finish top other than I?!”

“Tiffs (in) White will finish top of them all!” repeated the ‘Magic Manager’.

“What do you know – you’re a Manager!” roared the Reigate players and they stormed off.

Still, the Reigate players were bothered. So bothered were they that they decided to be rid of Tiffs, once and for all.

“We cannot wait another day!” Reigate declared.  Reigate called for her servant, a ‘huntsman’. “Find a reason to give us a penalty,” they said, pointing their long fingers at the huntsman. “Then we’ll beat them.”

The next day the ‘huntsman’ drew his ‘knife’ to give a penalty, but Tiffs (in) White’s keeper Connor Woolley saved it.

*By this time Tiffs were 3-0 up, but we’ll get to the seven goals later*

“That’s not what I mean”.  He pointed to the centre cycle. “How can I say this to you?  Reigate, your opponent, ordered me to give it,” he said.

“They did what?” Tiffs (in) White called out with alarm.

“You must play on!” said the huntsman.

Tiffs (in) White turned and attacked as much as they could. More and more they attacked. It was getting late in the first half.  They had been tripped and their shirts was torn. Divots in the pitch seemed to get in their way.  They were scratched, bleeding and ready for war.  They attacked on and on.

Then, all of a sudden, deep in the first half, there was a chance. It was a corner! Now was their chance.

“Get in?” they said, knocking on the Reigate door.  “Get in?” No goal.  The door was a little bit open.  They opened it some more.  “Are we going to score another goal?”

They looked around. What a chance!  They had never created so many chances!

“This chance may be the biggest one I ever saw,” Tiffs thought.  “But we missed it. Maybe if we attack more here, we can score our goals.”

As they attacked, they thought of someone they possibly missed.  Before the lockdown, they had a vice captain who played in their games.  They would create lots of chances at Grists fortress and score lots of goals.

After their last (friendly) he had picked up yet another groin issue. Now the vice captain’s armband was passed on. It wasn’t as fun as having him in the squad, but it was something they worked around.

Now that they had to play at Reigate, would they ever see him again?

After Tiffs (in) White cleaned up at the back, they went on the attack. In the second half, there were seven little goals lined up in a row. But, before that Tiff’s (in) White fell asleep and conceded another.

In the meantime, the Seven Goals were heading to the game after hard work at training.  When they got to the game, you can imagine their surprise when they saw Reigate all shook up!

“What kind of magic is this?” said one of the Goals, whose name was Rob.

“I wouldn’t mind more magic like this!” said another of the Goals with a smile.  His name was Khaj (1).

“We’d go on the attack,” said another Goal, whose name was Ash.  “Something is happening around here, that’s for sure.”

“Who are you?” said all the Goals at once, when they saw Tiffs for the first time since lockdown.

Tiffs (in) White bolted awake.  The Seven Goals could tell Tiffs were as surprised as they were.

Tiffs (in) White remembered their names – Khaj (1), Khaj (2), Khaj (3), Billy (1), Billy (2), Rob and Ash – Tiffs told them all about their opponents.  That Reigate had tried to get the huntsman to give a penalty, that the huntsman had given it but gave us two.

“Shoot here, with us,” said Billy.

“That’s cool,” said Tiffs (in) White.  “But if I were to shoot here, at Reigate, I would have to play the long ball.”

“Attacking will be easy,” said Tiffs (in) White, “as long as we all pitch in.  Handyman will let everyone know what part they can do, and we will do our  share too, of course.”

“But there must be something else we can do to score,” said Tiffs (in) White.

“Do you know how to pass?” said Flynn.  “I have these muddy boots, filled with assists and I would love to be able to use them in the trenches.” And so it was agreed that Tiff’s (in) White would give them Flynn passing lessons at training.

To celebrate their new friendship, Tiffs (in) White and the Seven Goals sang and danced the night away at Pryzm.

The next morning before they left for work, the Seven Goals warned Tiffs (in) White they must not concede any more.  After all, who knows what evil Reigate might do?  Tiffs nodded in agreement. They prepared their temprement. They also prepared for the second half. And so the minutes passed.

At the other end of the pitch, Reigate marched up to their Magic Manager.  “Manager, Manager, on the sideline,” they demanded.  “Who will finish top of them all?”

“Tiffs (in) White will finish top of them all!” said the Magic Manager.

“That’s impossible!” screamed Reigate.  “We’re only a goal behind!”

“Tiffs (in) White will win!” said the Magic Manager.  And an image was shown on the Tiffs group WhatsApp of them all with a trophy and the Seven Goals.

Reigate turned red with rage and screamed, “Tiffs will not get away with this!”

At the other end of the pitch in the second half, when the Seven Goals were having their half time break, there was a riveting teamtalk.

“Who will win?” said Tiffs (in) White. They remembered the warning of the Seven Goals not to lose to anyone.

“It’s a Tiffs win,” came a squeaky voice. Yet it was the evil Reigate, disguised as Eric Cantona. “It’s raining out here, my dear,” said their voice through the door. “Please let us in round the back.”

“Poor things,” thought Tiffs (in) White, “having to go game to game asking for goals.”  And so they  let another goal in.

“Take a look at these big three points,” said Eric, who as you know by now was really Reigate in disguise. He held the points close to Tiff’s faces.  “Lovely, my dear, isn’t it?”

“We would like three points very much,” said Tiffs (in) White. “But we have only one sub.”

Just then Reigate’s left wing flew open.  In marched the Seven Goals, bringing the three points home.  Shocked indeed they were to find Tiffs (in) White just a goal in front.

They scored around Reigate’s back door, and into the dying minutes of the game. Down to the corner flag they chased them, boxing them in.  All of a sudden Reigate knew the game was up and they went home.

But there was nothing to help poor Snow White.  She stayed absolutely still in her deep sleep.  The Seven Dwarfs gently lifted her into a glass coffin.  Day and night they kept watch over her.

There’s some soppy bit here about this woman falling asleep and being put in a glass display cabinet by some dwarves, but I can’t make it fit, so we’ll gloss over that bit.

Now nothing stood Tiffs (in) White’s way, they were at the top. They returned to their fortress, ready for round two of Wrestlemania. Ding ding! 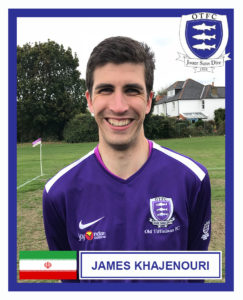