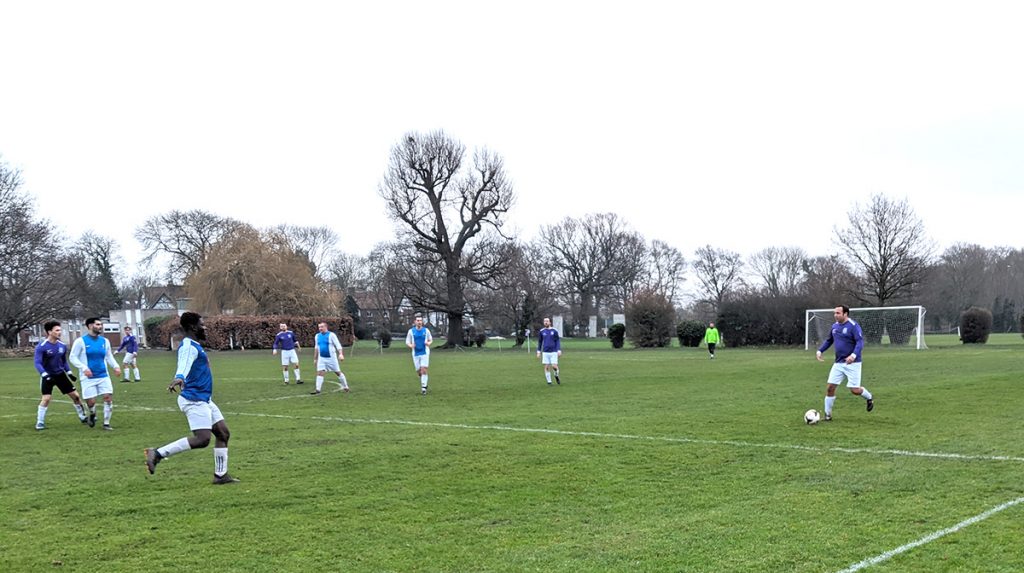 It was a bitterly cold and grey afternoon at Grists. A 14 man OTFC 3s squad brimming with quality arrived in confident mood to play a side they had beaten 6-0 just two weeks ago. There were a few raised eyebrows when the opposition came out and there were very few familiar faces (perhaps as few as 2) from that game but OTFC knew there was enough ability in their squad to collect all three points regardless.

As expected the game started with OTFC very much on the front foot. Bambi running things in midfield, Nutt winning everything in the air and Sam and Steve looking dangerous up front. It was not long before the opposition keeper pulled off a couple of good stops when first Sam and then Steve went through on goal.

As OTFC continued to push for the opening goal their ageing defence was caught on the break. The opposition winger found some space in behind on the right and his ball into the centre was confidently despatched. Nothing more OTFC debutant Perry could have done between the sticks. OTFC heads stayed high all the same and they were pushing hard for an equalizer which eventually came.

A Steve D corner was cleared back to him and, at the second attempt, he found Bambi with a peach of a ball to the back post. Bambi met it perfectly and sent it sailing into the top corner. 1-1 with OTFC very much in the ascendency.

It was seemingly only a matter of time before OTFC got a second when disaster struck again. The usually infallible Tom M was caught on the ball on the edge of his own box and a couple of passes later the opposition had the ball in the net for a second time. Smash and grab does not even come close.

The story of the rest of the game is a simple one. Wave upon wave of OTFC attack came to nothing thanks to a combination of errant finishing and desperate defending. The men in purple knew the goal was coming, it had to, but was there enough time left? Two or three appeals for stonewall penalties were waved away by the ref along with one or two which were less clear.

The opposition ‘manager’ who clearly hailed from somewhere north of the Watford Gap (and arrived at the game inexplicably wielding a crutch of 1930s vintage) went ‘full Tony Pulis’ encouraging his players to ‘stamp on them’ and accusing the Good Guys of being ‘cheats’. His team was becoming increasingly hysterical as accusations of lies and cheating started to fly about as frequently as their ever more desperate and violent tackles. They could see the writing on the wall.

But time was running out. 25 to go. 15. 10. 8. 5. With OTFC pushing more and more men forward in search of the elusive but undeniably deserved equalizer they got caught on the break again. This time a clearance from a corner found the opposition striker in space on the left. He played a pinpoint ball to the their right winger who evaded two men on the edge of the box before lobbing the keeper. 3-1 with just a few minutes to go. Game over. OTFC continued to push for a second goal but to no avail.

And below is Tom’s promotional video

CCC did I hear?