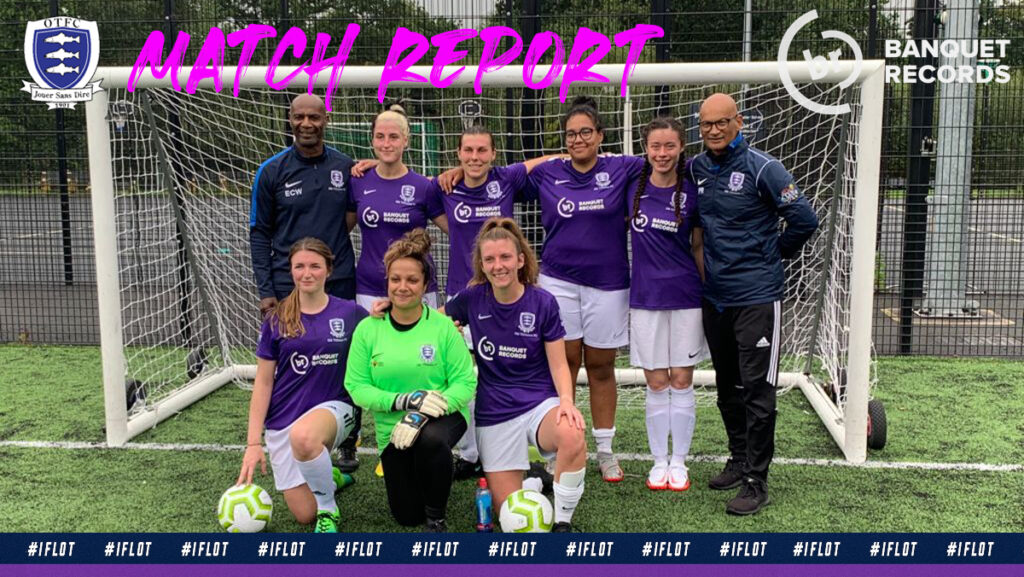 Playing away at the beautiful Woking Sportbox complex was a real treat the supporters were welcoming and providing a rousing atmosphere. There was encouragement all round for both teams.

The feeling before the game was one of both excitement and anxiety: this was for the team a step into the unknown. All feeling the nerves. However, it was agreed that the ‘butterflies’ were in fact a good sign.

The pre-match nerves however soon disappeared, calmed within the first few minutes by the sweet left foot of Chloe Binnington, as her strike nestled firmly between the upright and the crossbar. Was this a fore-warning of what was to come? Chloe has shown her potential in training, leading to knowing nods, in backroom discussions, from the team coaches as to what she could bring to OTWFC.

Tiffs women soon found that all those little passing drills were beginning to pay dividends with some swift interplay. Within the first quarter they found themselves 0-3 up!

Sohpie Ramsbotton (Captain) led by example. Running tirelessly for the team. Such that with the last kick of the game she came down with cramp! She was either to be found bringing the ball out of defence with one of her piercing runs, or she was at the back providing cover for the two centre backs Alanna Turner and Ana Cheang. Alanna playing having only recently recovered from Covid. Her dash to the touchline after five minutes to grab her inhaler attracted an anxious look from her team mates, wondering if she would last the game. But she did. Ably partnered by Ana Cheang, who was a steady and commanding presence at the back. Stepping in to break up any threat on the Tiffs’ goal, then calming bringing the ball forward to supply our marauding wing-backs of Chole Binnington and Fiona Leggatt.

Fiona capped a superb wing back display with two fine goals. The second of which was a pin-point shot dissecting the goal-keeper and the near post as the Woking keeper anticipated the cross to the ever-present Aurora Sullivan.

Aurora, in her first ever football match, not having kicked a ball until this summer got her just reward with a last-minute goal. She was a constant threat to the Woking defence, continually buzzing around and making any attempt to play out from the back a non-occurrence. She was also instrumental in the own-goal, pressuring the Woking defence into an error. Aurora described her legs as turning to “jelly” at various points in the game such was her mix of excitement and fear at playing a in a ‘proper’ game of football!

Tiffs closed out the half an unanticipated 0-5 up at half time. Could this continue?

And, yes, it could. The second half, was played with the same intensity and control. Control being the description of Tiffs play. Seeing many instances of swift interplay between the commanding back two and the midfield. Where the ball was not passed out, Sophie was able to bring the ball forward with one of her darting runs.

However, while the scoreline told one story the game was not all one-sided. Woking, themselves only formed this year, were gallant opponents. They never stopped running and they kept their heads high. Continually chasing down OTWFC. They posed a constant threat on the break. But could not get the elusive goal they sought. They did themselves proud.

The OTWFC keeper, Amirah Rahman, playing despite an injury suffered to her thumb in training, and was a doubt for the game, made three superb saves during the game to keep a clean sheet on her debut game. She described it as being “made easier” due to the excellent defensive duo that sat in front of her. Her distribution from the back was excellent, with her throws to start a quick break or her pinpoint accurate passes from the back.

The confidence gained whilst playing a great passing game that resulted in more goals.

The Woking goalkeeper will be the ‘woman of the match’ on their side. And, in fact, could be the woman of the match overall. Putting on a goal-keeping display that would have made Karen Bardsley envious. Exemplified by a series of triple saves that followed an initial rasping shot from ‘Sweet-foot’ Chloe Binnington!

While OTWFC ran out 0-12 winners, this was a game that all participants enjoyed. Providing a good game of football for those that had come along to offer their support to two developing teams.

The hard work over the summer months has paid off handsomely for the Tiffs Women, and we hope that this first game will provide a good omen of things to come.

Greg Nutt, OTFC Chair, expressed his enjoyment of the game, and was impressed by the skill levels on display from OTWFC players.

It was a pleasure to watch and the following should take a bow:

While this was the team for the day, the day’s display was built on the training ground and others in the squad have contributed to the day.

Player of the Match brought to you in association with Banquet Records: