There are club legends and there are solid gold, let’s be done with it and build a statue of the bloke  club legends. Wazza Arlow is one of the first (even after this game).

Ted Wightwick is of the second type. When a player, still playing in 2017, ambles over to the pictures on the clubhouse wall, points to a Tiffs side from the 1950s and says ‘I used to play with him and him’ you’ve got to award him legend status just for that.

Add in that the player was first team captain when he was old enough to play vets, his application is enhanced. Then consider he was long time club chairman, and each end of season club dinner in the nineties used to do a stand up routine superior to the professional comedians we later hired, and there’s surely no question about it.

Ted returned to the stage on Saturday – and by that I mean the pitch – where he has performed on and off for 40 years. It was a cameo role but it was probably our best bit of the game, and indeed he was not slow to mention, while he was on the pitch we scored one and let in none.

We were, unfortunately, 3-0 down before he made his entrance.

Tiffs have had good results against Maori in recent years but they are always close matches. This was no different and the Ts were not helped by the absence of several players, including our goalie.

Carl Naylor stood in during the first half in which we struggled. Arlow was centre back in his place.
Maori probably edged the half in terms of possession and territory, though it wasn’t all one way traffic.

They were well ahead at half time in the way that matters though, as they scored twice.

The first goal was a good strike by Maori’s big lad up front, who took the ball, fought off the attentions of two defenders and bludgeoned a shot past Carl in goal.

The stand in keeper made a great tip over the bar save later but could do nothing to prevent the second goal going in.

At half time Trevor ‘the tiger’ Huggins volunteered to go between the sticks, releasing Naylor into his natural habitat in defence.

The change helped and Tiffs sought to battle their way back into the game. But our efforts were fatally undermined when Wazza, at centre back, was guilty of a dawdle on the ball of epic proportions.

Receiving it just outside his own area, with easy options available, it got stuck under the big man’s feet for what seemed like an eternity. While team mates watched and waited, the oppo striker took the ball off him and tapped it past Trevor into the net. 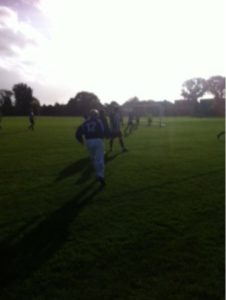 It was time to introduce Ted to the fray.

His entrance gave Tiffs some extra composure on the ball and we looked more like scoring.

This we did when birthday boy Luis hit a cracking shot from the edge of the area.

We toasted the Portuguese hitman with beers brought along by the man himself after the game. Good one Luis, and welcome back Ted.