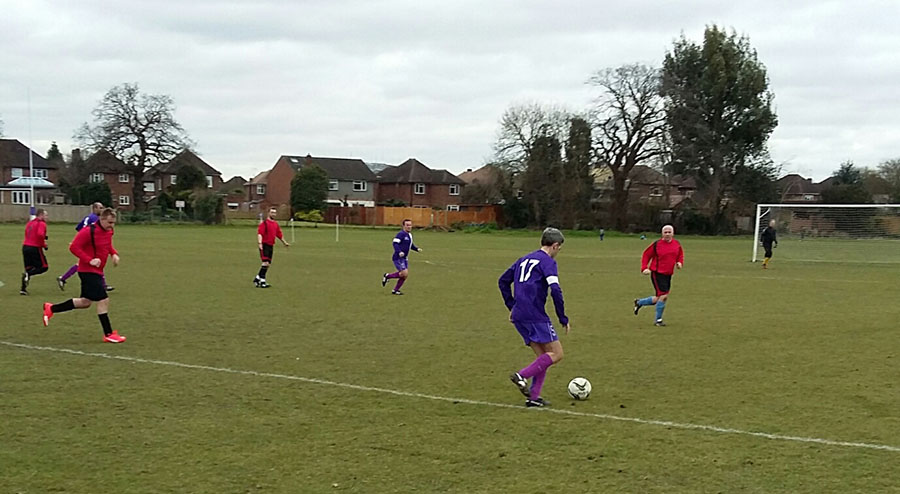 It was a day for patience on Saturday. The Tiffs had to wait patiently for the game to start, as members of the opposing side had been delayed on the journey from Berkshire to Surrey for this early kick off.

And once the game began, it was a day for patience as the vets looked for a break against a stubborn Langley side.

So often this year, their attacking impetus has run aground, with 0-0 being the outcome.

After 45 minutes, though they didn’t say so openly, Tiffs would have been concerned that this game could be following a similar pattern; one of strong possession for the home side, but few chances and even fewer goals.

Though Crusaders started with ten men, once the match had officially begun their 11th and even 12th men appeared miraculously quickly. And during the first 20 minutes it’s fair to say the away team looked as likely to score as anyone.

But Tiffs began to make inroads and Pete Stephens was conspicuous in enemy territory, rampaging runs and crosses coming in from the right back.

Ultimately the first half finished scoreless, and both teams took time to take stock.

Tiffs came out with a determined look, and immediately set about fashioning chances. Langley for their part, were hanging on in there, and making enough forays forward to keep the T’s defence on their toes.

Before the hour mark, a chance fell to Arlow – a bouncing ball and just the goalie to beat – but he cleared the bar by some way. Naylor grimaced, clearly narked: “We’re never gonna score.”

But it was all about patience. The Tiffs kept pressing forward, and eventually things fell for them.

A corner came in from the right. It was dealt with – sort of – by the Crusaders defence but it ended up still in Tiffs possession on the left. A bouncing ball was pitched back into the area and suddenly, there was Markham, up for the corner, waiting for it to drop.

With Naylor’s words providing extra motivation, he took careful aim from eight yards and pow: 1-0 to the vets.

This opening goal acted as a release for Tiffs, who then began to look more dangerous. Arlow hit a curler which missed the top corner by a fraction, and Rawlinson threw in a couple of stepovers before unleashing a longshot with his ‘other’ foot, which was a pretty decent attempt.

We hit the bar too, before a nice cross from the left was swung in by Houghton, and Arlow rolled back the years to get a deft touch with that dome of a forehead, and make it 2-0.

Harry hurried upfield to threaten a third on the break in the last ten minutes, but made a hash of it.

He then atoned with a lay off after more craftery on the left served up an opportunity which Evelyn finished in the dying moments, 3-0.

Overall a good day’s work for Tiffs and a sportingly contested match.

‘How long has it been since you last scored?’ Markham was asked afterwards. It turns out it was about 12 years. So that was another case of patience rewarded.