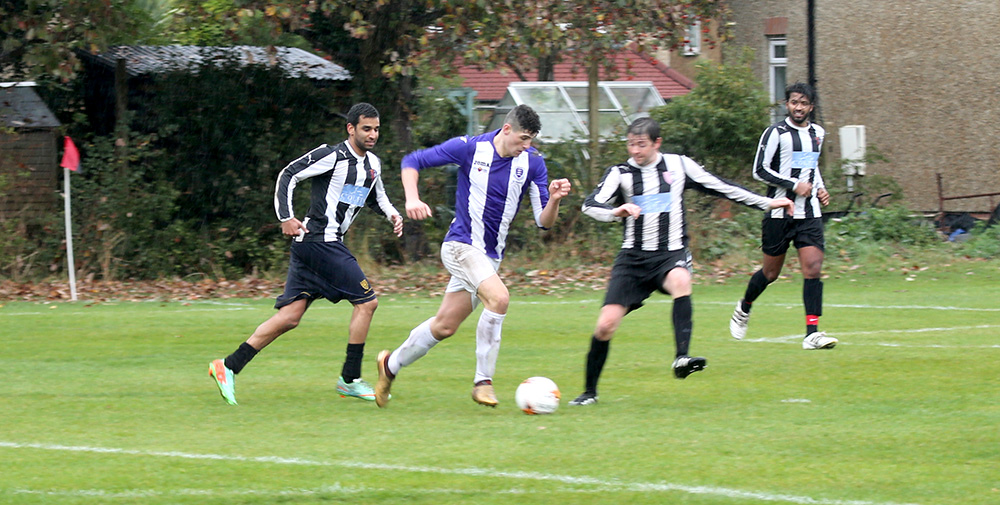 After one of old Ts greatest performances, beating the ever reliable Old Woaks 8-0, response was the quickest it’s ever been for the purps, a massive 18 responses by Tuesday… Everyone wanted to be part of this squad. Who can blame them, what a team and performance that weekend, you would be crazy to not want a place in the squad.
With the skipper back from a poorly timed mid-season holiday, tough decisions had to be made about who was going to join the team for the match against local rivals Old Paulines. With MBP away trying to rekindle relationships in Loughborough, there was a space in the squad for one lucky person to fill. Many rumors in the week about who it would be, everyone eagerly awaited the squad announcement that arrived on Friday Morning. With Dicky Returning to the squad, the final place was filled by the handsome Dave Bettis, looking to make his mark in the 1st team for the first time this season.
Saturday morning came, and it was wet… very wet. Nothing though could stop the excitement of the possibility of sending local rivals to the same grave that Old Woaks were buried in the week before. Tom Scott was the first to arrive at the ground, 9am he rocked up, some say to get a pedicure, others say to chat up the ladies behind the bar, no one can be sure, although If it was a pedicure he went for, he should probably ask for his money back, or at least a discount as they only had 8 toenails to work on.
As kick off approached, the Purple heads left the dressing room, all pumped up, only to be met by sideways rain that left 90% of the squad taking shelter outside the dressing room. Once all the boys grew a pair and headed to the pitch, the footballs were distributed and everyone began to pass the ball along the slick deck and prepare their touch for what was going to be a very quick surface. A proper warm up followed, the team was read out and the good guys were ready to take it to Paulines.
Kick off… The Ts had lined up in a 5-3-2 formation, different to that adopted the week before where we won 8-0, but the lads accepted it and got on with the game. Ts looked rumbled at the beginning, with them struggling to find an out ball to get it away from our area, but slowly the lads settled. A few contested decisions by the ref got the lads fired up and obviously wanting it more than the opposition. A penalty that wasn’t given as Scott was seemingly blatantly brought down in the box, got the 9 toenailed, 4 consecutive hat trick striker pumped up. With the ref not helping his cause, Tom decided to take matters into his own hands. With his back to goal and ball at feet, Tom held off the defender on his back, nudged the ball to his left, turned, and struck the ball as sweet as you’ll probably ever see. 25 yards out, underside of the cross bar rattled and the ball hit the back of the net… what a goal! The purps were ahead and the crowd (Tim Robini) went wild. Another goal followed shortly with the ever gorgeous Alan tidily tucking the ball away to make it 2-0. After that the purps scored once more, and went in to the half time break 3-0 up.
The formation was changed at halftime, back to 4-3-3, and a few changes made. After a pumped up team talk, the lads headed back out. The second half started with a quick goal, and more slick football from the boys in purple. I can’t remember much about the second half, apart from more goals, one of which unfairly went against the Ts with the opposition player being about 3 meters offside (unsurprisingly missed by the ref), a shout from the oppo that they were winning the second half, only to realise they had only scored 1 in the second half and the good guys had scored 3, and Tom Scott completing his 5th hat trick in as any games with a very unspectacular penalty.
The final whistle blew, with the fulltime score 7-1 to the good guys. A very wet group of lads had a quick Gerrard esc huddle at the side of the pitch, and then headed into the changing rooms. The high spirits were quickly destroyed in the changing room, when everyone opened up their kitbags to find their pants and socks all soaked from the relentless rain. However as the Ts headed to the showers, their spirits were quickly raised back up by the sight of some very powerful and hot showers.
Post-match food and pints were had. Tom Scott won MOTM. A very hefty amount of fines were dished out.
Onto next week where we look to cement our place at top of the league