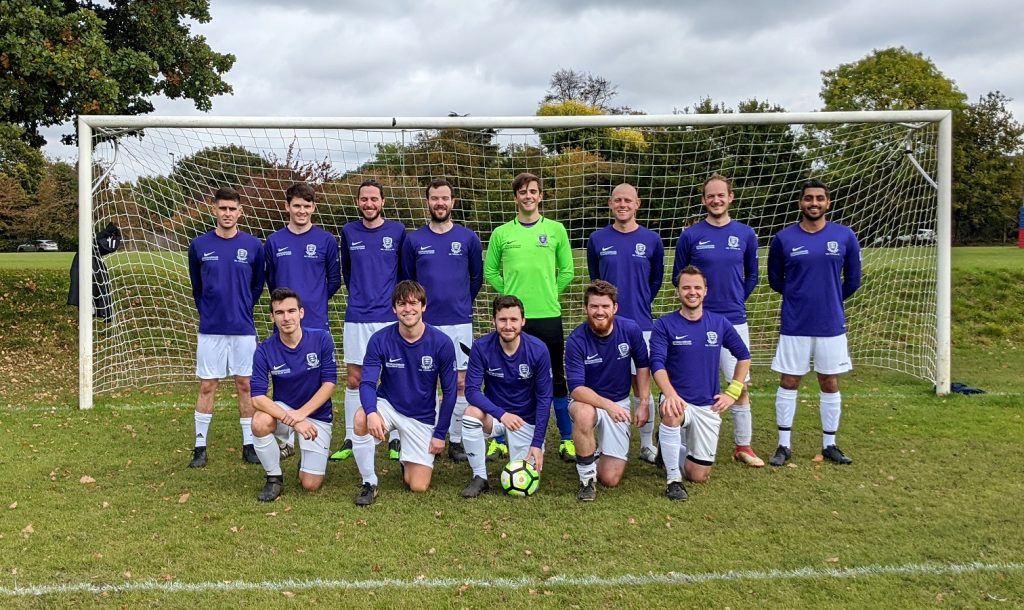 Having accrued considerable mileage after three consecutive away games including a trip to the infamous Bexley, OTFC 2s (aka the good guys) finally got their chance to entertain at Fortress Grists vs Old Meadonians. Despite some confusion about government guidelines (Tier 2) and the meet time (Marshall was fined accordingly), a full roster arrived for the game almost in time for a full squad picture (Leung was also fined accordingly).

Going into the game, the odds were looking good for Tiffs after picking up 2 wins and having the luxury of a bench of Leung, Jackson and Leach…talk about saving the big guns! However, after a respectful Black Lives Matter kneel, Tiffs proceeded to show far too much respect for Old Meads who started the better side, but fortunately this possession didn’t amount to an end product. Tiffs did manage to get back into the game, playing some nice passing football across a solid back four of Bostelmann, Hogg, Marshall and ‘Brompton’ Breck with debutant Muller finding plenty of space out on the wing and ‘Twinkle Toes’ Umrigar trying his best to up his dribbling stats on FIFA.

The game then took the first of many twists when goalkeeper Nichols decided to live a little too dangerously on the edge of the box to concede a free kick for handling the ball outside the area…SPOILER ALERT…this wasn’t the only time Nichols got in amongst the action! Thankfully yet again, the opportunity amounted to nothing with Tiffs very much still in the game.

Inevitably though, ignoring the warning signs, the Old Meads number 9 managed to get through on goal and lofted the ball over the helpless Nichols to put Tiffs 1-0 down… this wasn’t part of the master plan. And to add further misery, Old Meads then had several other opportunities to get a 2nd goal only to be shut out by the woodwork twice in quick succession.

Other ‘highlights’ from the first half included several high balls up to Umrigar who battled well despite being up against by far the biggest player on the pitch…clearly the pre-match team talk about keeping the ball on the deck hadn’t been listened to… and a very bizarre and rather harsh booking for Muller for either simulation or dissent to tarnish an otherwise flawless debut.

Cue the half time whistle and out came the ‘hairdryer’ from skipper Yates who did his best impression of Mystic Meg by prophesying that if Tiffs could get an early equaliser in the 2nd half that they’d go on to win the game (both actions were fined accordingly).

Whatever was said at half time seemed to make a difference as ‘Twinkle Toes 2.0’ Leach managed to play a perfectly weighted pass to Leung who then executed a calm finish to get an equaliser for the good guys…cries of offside went unheeded.

Then came the real turning point of the match. Old Meads managed to get into Tiffs box and amongst the chaos a penalty was awarded for a supposed hand ball… Bostelmann then decided to show the (female) ref his nipple to prove his innocence but to no avail (he was fined accordingly). Old Meads decided to bring back the first half scorer off the bench to take the penalty. With two spectators filming the resultant penalty, there was a sense that something good was about to happen for the good guys. Up stepped the number 9 to try for his brace but keeper Nichols guessed right to make a fantastic save to keep Tiffs in the tie… the game was back on!

This seemed to be the spark Tiffs needed which saw some great chances created to take the lead…sadly for the Fines Pot, not all of these clear cut chances were captured as fines…(Harrison was fined accordingly). Leung was unlucky not to get a 2nd goal, the ball miraculously managing to stay out after hitting the inside of the post. After lots of persistent pressure, Tiffs finally got their break through after Hogg (aka the Assist King) sumptuously teed up Williams (aka Bambi) who, despite trying his best not to score, fired the ball into the top corner to make it 2-1 to Tiffs… the jury is still out whether Bambi is a striker or centre mid.

Nichols then managed to get in trouble again with some more risky handling (kids these days…) on the edge of the box to concede another free kick which thankfully also came to nothing. Jackson (aka Stevie Wonder) managed to stake a decent claim for a more forward position after some marauding runs forward and not to be upstaged by Muller also managed to get a booking. Bajawa (aka Mos) staked his claim for future skippering duties by suggesting some game management tactics to take the ball into the corner despite there being 10 mins left on the clock. All of the above was fined accordingly… it’s going to be one hell of an end of season social once it eventually comes round!

Tiffs rode their luck at times in the latter stages of the game. Calls from skipper Yates to ‘stay calm and carry on’ went unheeded but the good guys managed to hold on for a 2-1 victory to make it 3 wins from 4 games…not a bad start to the season.

Notable nominations for man of the match for Harrison (aka Pirate Beard) and Leung but keeper Nichols took the honour after his penalty save to get the award for the 2nd time in his Old Tiffs career…and they say lightning never strikes twice. Nichols then proceeded to tell anyone who made eye contact with him (and even to those who didn’t) about his penalty save including passengers on the bus home… and deservedly so.

Next up, back in the road for a trip to John Fisher.

Did I mention Nichols’ penalty save?

Tom “I saved a pen” Nichols