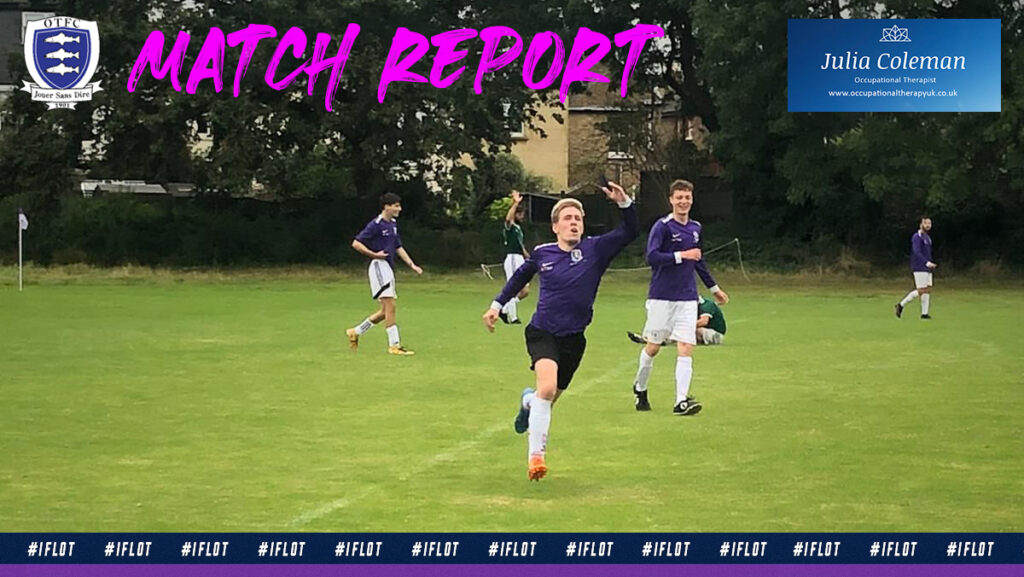 Old Tiffs 3’s went into their second league game high on confidence following an excellent 2-1 away victory on the opening day of the season. Over a hundred  spectators made their way to Grists for a huge day of sport, with around five plus the team mascot, Popcorn the dog, making their way past the rugby pitch to watch the mighty 3’s. A first start of the season for “Counter Attack” Zak Lewis. Summer signing Luca “Phil Neville” Burgess, a talented young utility player made his 3’s debut. There was also a full club debut for rapid striker and “Foden Hair-a-like” Adrian Janjeva.

The first 20 minutes of the game was an even contest. Reigate making a good start and having their fair share of the ball. The 3’s forced a few throw ins deep in the Reigate half but weren’t able to make the most of them. This changed when long throw specialist George “Lazer” Sullivan launched one into the Reigate box, and after a couple of bounces the ball fell to Captain Ash Birch-Ruffell who struck a lovely half-volley into the bottom corner to make it 1-0.

The purple warriors began to grow in confidence, winning another throw in 10 minutes later in an excellent area. With regular throw in taker taker George off the pitch, Captain Bill Zeqiri launched one deep into the Reigate box. The goalkeeper flapped at it and the ball bobbled in front of him, but Alex “Emre” Barkham held him off, swivelled and struck a sweet left foot volley into the bottom corner – all this and not a freshly faded hair out of place on his head. 2-0 to the good guys.

After some good hold up play from “The Housewives Favourite” Dylan Brillante, Captain Bill found himself on the edge of the box. He danced past one man and was then scythed down by a Reigate defender – the scream was heard over the PA system and there was only one decision for the referee. Penalty connosieur Zeqiri dispatched the spot kick and the the 3’s went in at half time 3 goals up. The wine gums were out and more of the same was asked for in the second half.

The second half started. Tom “Trousers” Leggat was his usual assured self in goal, sporting tracksuit bottoms, with added shorts over the top to complete look. Aaron Elwood got stuck into some vegan-based meaty challenges and Tiffs were in the ascendancy. Ash continued to hold up the ball and link the play together. This culminated in a darting run from magic man Zak, and (who despite not screaming as he fell) was clearly taken out in the box. A second penalty was awarded. Zeqiri stepped up to bag his third penalty in two matches and 11th in a row. Tiffs were 4-0 up and cruising at this point.

Utility man Luca was living up to his billing. Slotting into central midfield, he moved into his 3rd position on his 3’s debut – kicking off a bid to fill all 11 positions this season. It was his beautifully weighted through ball that set the pacey Adrian away. Adrian struck a delightful curling left footed effort from 24 yards over the goalkeeper to make it 5-0. His Alan Shearer-like celebration matched the finish, sending the fans wild with cheers and barks in equal measure. It is still unknown if Adrian’s combination of orange and blue boots distracted the goalkeeper.

Only one thing could cap off this fantastic performance – a first clean sheet of the season. The whole back 5 had been on their game. The “Careless Whisperer” Harry Littlejohn had sobered up following a night spent at Club Tropicana. Sam “Thiago Silva Fox” Edgar had gone nearly a whole match without conceding a penalty and Marcus “Not Albanian” Lovett was on track to win his regular goody-two-shoes fine. These dreams were soon to be shattered. A hopeful punt upfield was converted by a Reigate player, despite the scorer being 10 yards offside. The goal was sadly allowed to stand – a Tiffs player was adjudged to have brushed the ball as it went through.

The game looked set to finish 5-1 but one moment of magic remained. A sixth fan had appeared for the final few minutes, and earning him a childhood dream fine, Zak scored the final goal in front of his onlooking mum. Made from a great run by Ash, and a beautifully stroked lay off by Luca, Zak struck from the edge of the area and watched the incredible dipping shot fly into the top corner. This rounded off the scoring and make it 6-1. He dedicated his goal to his new niece up in Borehamwood.

This goal fest means the 3’s start the season with 6 out of 6 points and things are looking good.

Post matches pizzas and beers were enjoyed by both sides, with the Ant Hill Mob also impressing in the Pizza Eating contest. Onto next week and the first round of the Cup!!

Player of the Match brought to you by Julia Coleman Occupational Therapist: