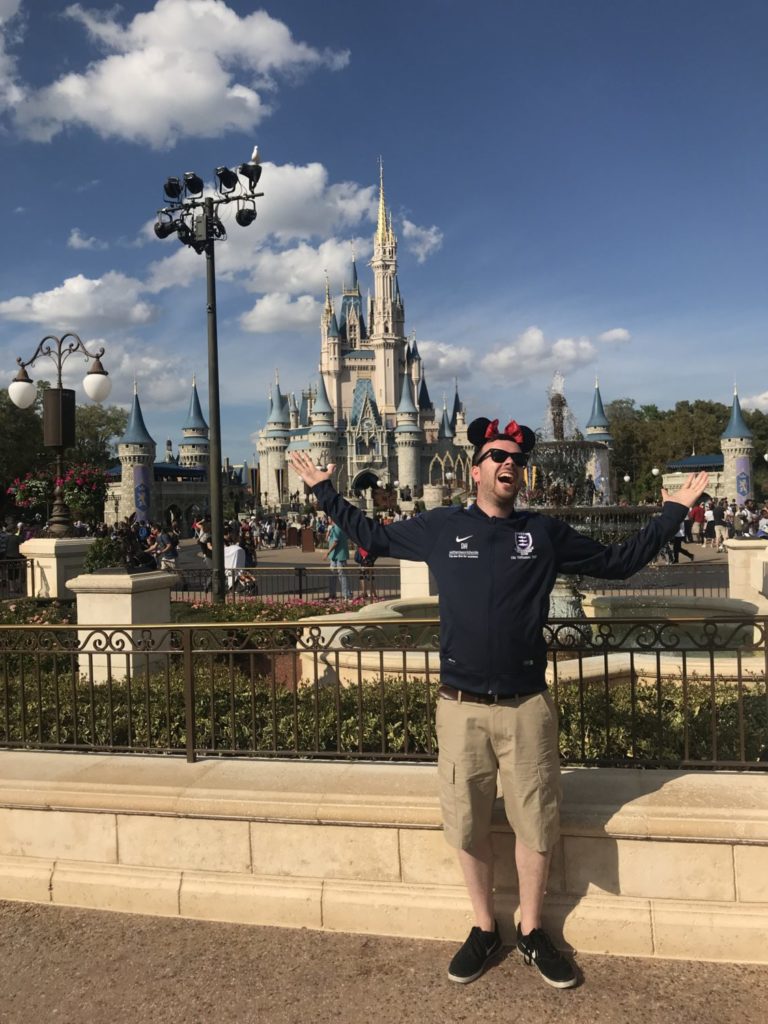 I didn’t find out about our glorious club until the winter of 2013. A Facebook post of some old school mates, wearing that glorious pink IIIs strip, all looking immaculate, having a great time was the opening tempter. I hadn’t played 11 a-side football before as an adult. It wasn’t since the days of Little League on Dinton Field and Latchmere Rec that I had played in a 4-4-2 formation. 5, 6, 7 a-side took over my time at university, and it didn’t happen nearly enough once I graduated. I needed to get some regular exercise.

Subject: OTFC IIIs, 22 February 2014, away against Dorking, 2pm
Details:
A lot of guff about me being an incredibly one-footed left-winger who couldn’t make a proper tackle and didn’t know how to get to Dorking.

SELECTED. I only knew one face when I got to the ground. “I thought it was supposed to be Old TIFFINIANS?!” I thought, selfishly, eventually realising that there were Tiffin Alumni playing from earlier and later than the leavers of 2006…still, it was nice to see Andy Dickinson again.

I had underestimated quite how fit one needs to be when bombing up and down a wing, running to collect the ball for throw-ins and goal kicks and also, just playing the actual game. It didn’t feel great. During the 50 minutes I played, I think I touched the ball six times, my first cross (which had been my main weapon when I was at school) was woeful; no lift at all, pathetically weak, and approximately five meters behind our lone striker for the day, John Edwards. I did eventually get a decent one on to John’s head, but, there wasn’t enough pace, and he was too far out to really call it a clear cut chance, we were both fined accordingly. We lost the game 4-2, and the scoreline really flattered us.

I stuck around for the social in that nasty little shed, with a large bowl of Dorking chilli, and stale French bread. I’d never heard of fines, players washing kits, taking footballs, drinking four pints after a fairly hectic runaround…it made me nervous, but also amused.

My first training session at Tiffin School. I recognised a few more faces from my year group, then I glanced at Tom Scott absolutely blasting the ball at Seb Rose over, and over again. “Those are some of the Is players”. “GULP. Is players?!” I sheepishly asked. “Yeah, don’t worry though, they really aren’t that good”, replied Tommo. PHEW.

55 minutes later, having ended up on my arse three times, been on the receiving end of one of Tom’s enormous flailing limbs, a grazed knee and the imprint of a football on my newly rouge thigh, I wasn’t sure whether I was going to cut it in competitive amateur football.

I didn’t play again for another couple of months. I was a brand new player at the club, so didn’t know who I should contact. Dicky got in touch (must have been desperate), and needed a left-sided player for a home game, against a truly nasty bunch. May have been John Fisher, possibly City of London…I forget. My first game of the OTFC IIs went a little better. The standard was marginally higher, but the opposition were real gits. It didn’t feel good to be on the receiving end of a couple of studs up challenges to the ankle. However, we drew 1-1, and it was a deeply satisfying result.

That was my last game for the 2013/14 season, and after a very average cricket season, I desperately needed to pick up competitive football again. Ciaran picked me for the IIIs, and my first game was against a talented Reigate side. We drew 1-1, and it was the most combative game of football I have ever been a part of. The opposition gestured towards me at a corner, “Big man coming in”. “Big man?!?” Well, it felt wonderful, and upon hearing it, and being the only over six-foot player in the squad that day, Ciaran immediately moved me to centreback. I loved it. It was expected of me to take out a little bit of aggression on the opposition forwards, and in my mid-20s, I was reasonably quick (for a big man). I must have looked excellent in my first few games – debatable.

However, it was my partnership with Lee Orchard that really stuck out to me. During the 2014/15 season, we both played 15 games or so each, both at centreback. Lee was aggressive, and exceptionally strong on the ball. I was tall, quick and had (have) an enormous head. We were the perfect combination for AFC Division 7 South football. I maintain that Lee is the best player I have played with at OTFC, and he really did teach me a lot. Could use him in the IIIs next season…

With the IIIs, I enjoyed two seasons of lower mid-table performances under Ciaran’s command, but we were consistent, and when we had a strong side out, we were really quite good. Langers, Bambi, Ed Whitehouse and Dan Jackson were all a key part of that squad. I have some very fond memories of those seasons, warming up around the corner flag at Old Whitgiftians to break up the substantial amount of ice on a crisp January afternoon, beating Reigate three games in a row with very tight scorelines, Rob Mitchell walking in to a glass door, to name but a few.

Soon after Ciaran’s son was born, I got a text from him, asking whether I’d be interested in skippering the side, along with Bappo and Langers. I was a little hesitant at first, it looked to me that Ciaran did a lot of work in his spare time for the club – organising a IIIs squad every week, helping to set up the newly-formed IVs squad – all while raising a newborn. After some umm-ing and aaah-ing, and the generous offer of pizzas and beers over at Ciaran’s in Tulse Hill, myself and Bappo agreed to co-captain the side for the following season (Langers was unable to put himself forward due to a rapidly approaching move to China – a gutting start).

SKIPPER. Not a huge change to the squad in the 2016/17 season, and we had a great start. Two wins and a draw in our first three games, and I wanted to retire, unbeaten as skipper. Then it all changed. We conceded seven a couple of times in a row, then six, five, six, four, and didn’t pick up any points during the middle games of the season. “Blimey, this is awful!” I could tell that some players were losing interest, and I can’t blame them, we were getting hammered, and it didn’t feel good. The rest of the club, meanwhile were picking up wins and draws every other week, it seemed. I was desperate for things to change.

I didn’t anticipate how much work there was involved in skippering. It’s not just sending out the odd email and text, there’s admin work involved, chasing unpaid match fees and fines, seemingly endless negotiations with other skippers on Thursday afternoons, ordering pizzas, SHIT, I forgot the corner flags best run back to the pavilion. However, it is highly rewarding. There’s no real ‘power’ involved with the role, since we often struggle to get a full side out so we rarely have a ‘nice selection problem to have’, but, when a tactical gamble pays off, it feels wonderful.

The 2017/18 season wasn’t much better. We had recruited well in the summer, I’d managed to convince some former school mates to come down and play with the IIIs, and they helped us form a core of the squad. However, with two of them doctors and one of them living miles away, the regular availability soon dissipated and we had to beg, borrow and steal to field eleven each week. We used over 70 players that season, had to make a round-trip to Solihull only to get battered 9-1 in the cup followed by Ben Lewis’ infamous car-key-gate, conceded goals directly from corners, back-passes and throw-ins, and managed to play one player in every position on the pitch apart from at goalkeeper. It was rubbish.

In to 2018/19, with Joe Yates stepping in as the new VC for the IIIs, I’d been crying out for an OTFC Draft all summer. The IVs had been smashing their league in the previous season, with a handful of players scoring over a dozen goals and/or assists during the campaign. The club were under investigation by the league. The IIIs were too crap, and the IVs were too good. We had to treat it delicately, as we didn’t want to turn the IVs in to the club’s new whipping boys in one fell swoop, we wanted a gradual transition. Unfortunately, for the IVs, we ended up gutting them completely, taking some of their best players. We tried to replace them, but didn’t have much luck.

However, despite that tension in the club, and overall with some fairly disappointing league positions, the past season has been my most enjoyable as a skipper at the club. We’ve had some excellent results, and have developed a real core of players, even though we’ve used over 60 and had massive goalkeeping problems throughout!

So, 100 down, hopefully at least 100 more to go, and I’ve loved it all, the wins, the draws, the losses, the cold days and the hot. Huge thanks to Greg, Dicky, Ciaran, Lewis, Seb, Tom, Al, Bappo and Joe for all of their hard work over the past few years – it’s been emotional.

HIGHLIGHTS:
– 3-1 away win at Old Tenisonians, my first competitive game as skipper, and our most dominant victory
– 9-1 away win at Old Guildfordonians (Dave Harry scored four in the game, and was our top scorer until February, Tom Wightwick scored two and assisted three and didn’t get a single MOTM nomination…he was a little grumpy), my best victory as skipper
– Rob Mitchell walking in to a glass door, also at Guildford (he’d also injured himself during the warm up after kicking a football – melt)
– slide tackling the opposition striker as the last man, on a wet day at Old Sedcopians for the Vs, I felt like Sol Campbell

LOWLIGHTS:
– 2017/18 season
– the hangover after the end of season social of 2019, 2018, 2017, 2016 and 2015
– getting nut-megged by Colin Avery for the first time
– getting nut-megged by Michael Peake for the first (and only, so far) time…when he was 14
– Seb poking his head and goading me through the Fighting Cocks’ over-sized, head-height glory hole in the gents, when all I wanted was some peace and quiet after a heavy meal at Steins