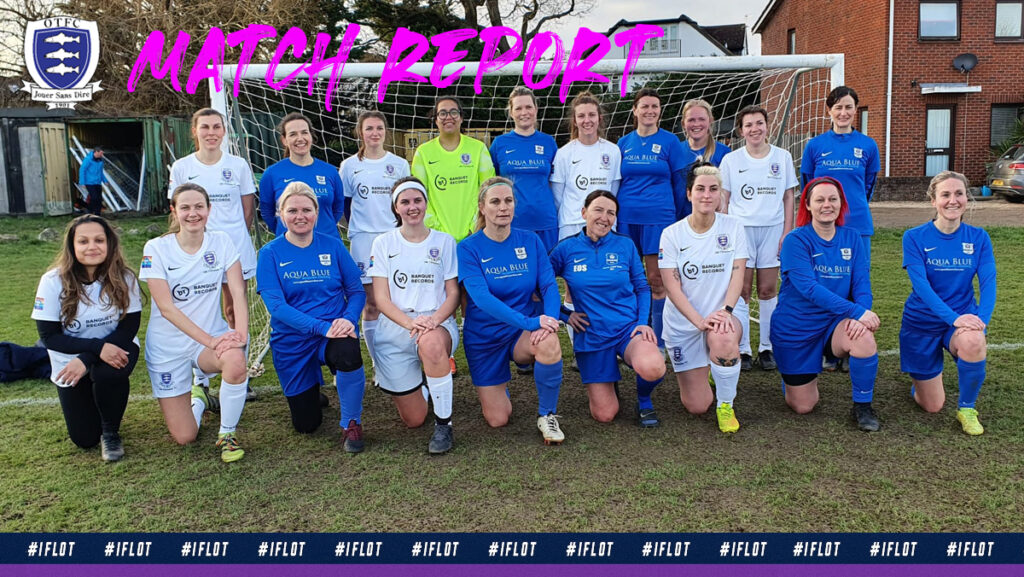 Another confident, compact, team performance from OTFC Women. The team gave a solid controlled team performance to run out eight-nothing winners against a spirited Kingswood Aqua side. Kingswood never stopped running, and with a solid middle defended well.

OTFC opened the scoring within two minutes with a right-foot strike into the into the top right of the Kingswood goal from, ‘The engine’ that is Sophie Ramsbottom. Sophie scored her second in the 9th minute, after some intricate inter-play with the middle trio that is Chloe Binnington, Sophie Ramsbottom and Fiona Leggat.
Sophie’s two goals were interspersed with excellently worked goals by Fiona (4th minute) and Lotti (5th minute). Alanna provided the assist for Lotti’s goal, confidently stepping forward out of defence where she had a confident game at the back, providing the cover for her teams to go forward

Amirah Rahman partnered Alanna at the back – making a solid defensive partnership in front of Ana Cheang, in goal. Ana being pleased with her clean sheet. Matilda Schwefel, providing a dynamic link in the middle, with the speed to cover at the back. And forming a central fulcrum in the middle to switch play.

The first quarter ending with Old Tiffinians 4-nothing up. The rather bobbly pitch surface did not make the game easy but Old Tiffinians looked to maintain their movement of the ball around the pitch, always looking to stretch play.

Tiffinians added to their tally in the 5th minute of the second quarter. The goal a just reward for Lauren Harper who ran tirelessly for the team at the front. Always chasing down and harassing the Kingswood defence, preventing them from playing out from the back.

Lauren added to her tally in the third-quarter, following up from a mazy solo run by Fiona from just inside her own half, only to see her guided effort strike the post, for what would have been a goal comparable with Maradona’s mazy dribble against England. It was not to be but on hand was Lauren, like all good goal-poachers, on hand to pick up the scraps, adding her second and Tiffinian’s sixth!

Tiffinians added two more goals in fourth-quarter. Lotti topping of with the 8th goal, finishing off some intricate interplay across the box of Kingswood goal, going down the right and then a fine cross with Lotti on hand to finish off. Fiona got her second and Tiffinians 7th, in the 6th minute of the 4th quarter.

This was a great team performance as evidence by the spread of goals. The team showing great intelligence as Kingswood formed a solid block across their goal. Tiffinians movement of the ball and the ability to get behind allowed them to build on their early start where they had more space to play through the Kingswood defence.
Great performance and good win. But a good game against a Kingswood side that played with great spirit, motivation and sense of fun!

Thanks to Julius Miller, our referee on the day.