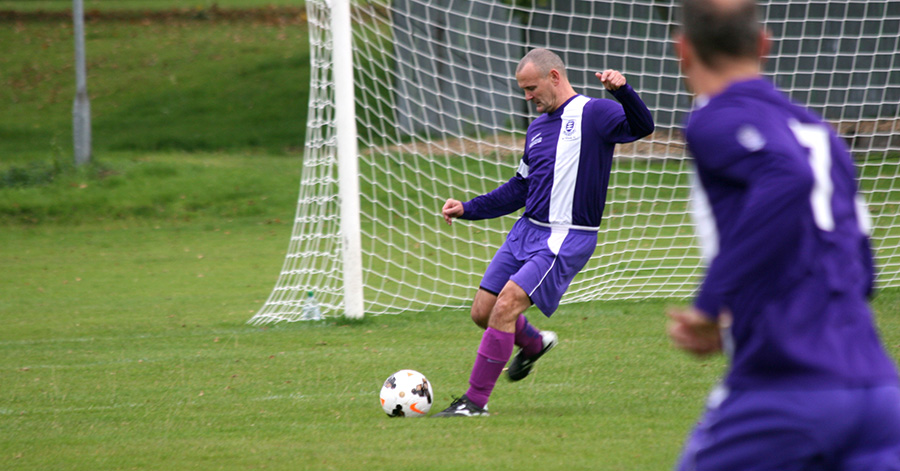 One would like to be able to report that this was one of those nil nils which belied the score. A nail-chewing, helter-skelter, belter of a game, where pace, poise and panache were all on display, and just a goal was missing.

Alas, that was not the case. High winds and a bobbly pitch made good football very difficult. To be fair, both teams tried to pass it around, and succeeded in very short spells, but whether that was enough to entertain our record crowd, huddled on the touchline, is hard to say.

Molesey, as they tend to do, were out on the pitch early beforehand, a brisk hour long warm up being their traditional approach to a big game. The Tiffs took a different approach, one of their players who forgot his boots sprinting from his car to join the fray just as the whistle was about to blow.

Due to preparation or not, it was Molesey who took the initiative in the early exchanges, a clever early through ball just evading Tiff boots to give their striker a glimpse of goal. Keeper Dave Smith was ready and able to make a smart save.

Smith was tested again when a shot from outside the area was deflected by centre back Markham. Switching his balance the keeper again made a good save, preserving the clean sheet and his defensive colleague’s blushes.

But steadily the Tiffs battled their way into the game. They were playing directly into a headwind, which may have helped to wrongfoot them during the early exchanges, but slowly the midfield started to exert their authority and they worked their way to the edge of the opposition’s box on a number of occasions.

Sometimes it was lack of numbers in the box, sometimes it the final ball wasn’t good enough, occasionally the finish was imperfect. In any case, the score remained 0-0.

In the second half Tiffs looked to take advantage of the wind at their backs, and there were spells where the opposition struggled to clear their lines. But beyond driving up the corner count, they achieved little with the territorial advantage.

Molesey laboured to get the ball upfield to no great effect but in one rare foray, with about an hour gone, disaster threatened.

A throw-in reached a Molesey man just inside the Tiffs box, Markham close by. With the attacker still bringing the ball under control, apparently no great danger, the referee decided there was shirt pulling and pointed to the spot. In this author’s unbiased opinion, there most certainly was no foul, and not many beyond the ref felt it was a penalty, but justice was ultimately done, the Molesey striker sportingly drilling it into keeper Smith’s large hands.

The last ten minutes saw a couple of moments when Tiffs might have nicked it, balls into the box leading to headers which hit the bar, then later the post. But on balance a draw was a fair result. Special mentions go to Steve Moodley, whose dynamic driving runs on the left added some momentum to the Tiffs attack, and new boy Alan Evans who put in a promising cameo at right back, while everyone who turned out for Tiffs put in a good shift.

Thanks to the opposition for hosting the game which was due to be at Grists, and for providing the pitch, referee and helping out with the hospitality. Tiffs meanwhile look forward to home comforts someday soon.