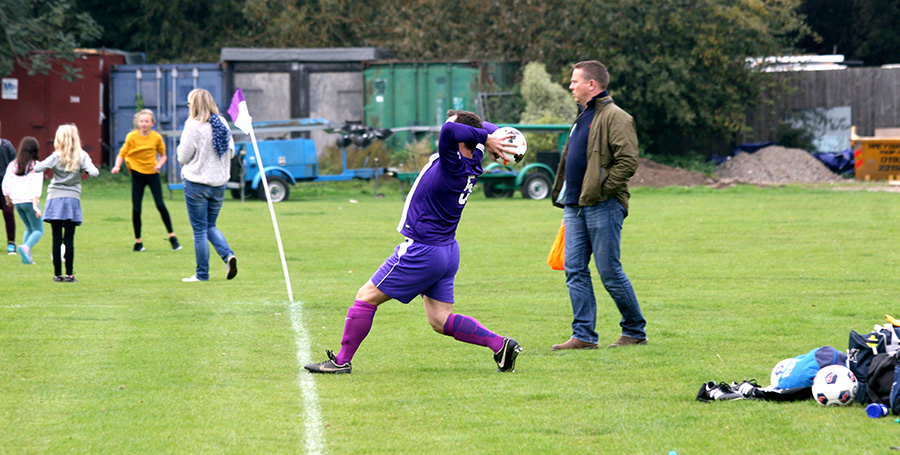 Old Tiffs arrived in Hersham having lost 6-2 to the same opposition in November, a rain-sodden day in which the vets got a football lesson from a pacy, punchy outfit who were damned decent on the ball. In other words, we were up for a battle but not massively hopeful of getting a result in this return friendly.

But harrying, hustle and hard work helped the T’s build a platform in the first 45 minutes, upon which the team began to feel secure at the back, and create the odd opportunity up front. Wait a minute – against our expectations, we were in this match.

It’s probably true that Hersham had a touch more of the ball but they struggled to make any headway with it, and then suddenly, gloriously, after 25 minutes Tiffs took the lead.

A bouncing ball outside the area and Alistair Rawlinson, whose midfield scrapping was exemplary, matched endeavour with skill and arrowed a shot from 20 yards beyond the keeper’s reach for 1-0.

‘I’ve never scored in an 11-a-side match before,’ young Ali said modestly afterwards. It was some way to start.

The half continued with Tiffs at least a match for their talented opponents, who started to argue with each other, and in their frustration the ref.

The teams turned round with the score still 1-0, but in the second half the game began to take a different shape. Hersham employed more of a pressing game and in patches they got at Tiffs and started to dominate the ball. Play shifted so it was more in the Tiffs last third, and legs began to tire.

So far, so concerning for Tiffs, but after an hour it was still 1-0, and the guys were hanging in there.

As is the way of amateur football though, the game was about to take an unwelcome turn of events: the oppo were – arguably – assisted into the game with the award of a bit of a soft penalty. A defender’s tussle slightly unbalanced an attacker as he prepared to header a corner, though he didn’t go to ground – or even appeal really. The ref saw it as a pen though and that was what mattered. The taker made no mistake and it was 1-1.

Again, as is the way of football sometimes, things went from bad to worse quickly. Almost immediately a break down the right and a defensive mix-up gallingly handed Hersham the lead.

Pressure continued to be applied to the Tiffs midfield and defence, and gaps started to appear. A penalty was awarded – this time there was little doubt – which led to 3-1 and some nice play near the end added a cherry to the Hersham cake, though it felt more to Tiffs like a custard pie in the face.

Despite the scoreline, which seemed scant reward for their efforts, the Tiffs vets acquitted themselves well and should be able to look forward to better days if they can play as well in the remaining league games this season.