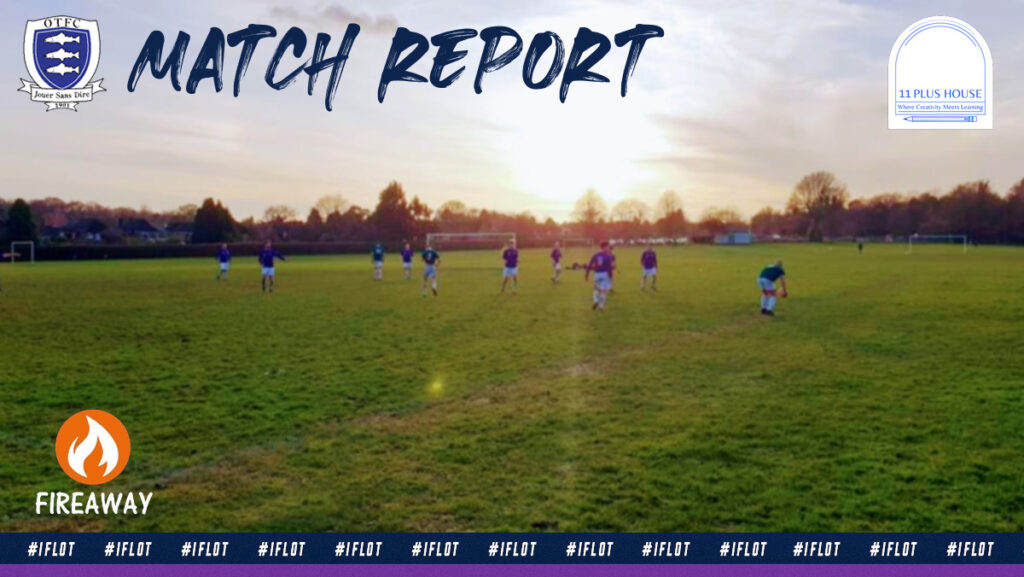 Having been involved in an 11 goal thriller last week, the Vets second team went two better yesterday as they played their part in a rollercoaster of a 13 goal extravaganza – one in which the old tv videprinter would have spelled out the scores of both teams.

Fortunes see-sawed more times than in the Novak Djokovic ‘will he play in the Australian Open or not’ saga, and in this writer’s opinion, the Tiffs game was more interesting.

Pre-match, things were not looking promising as Tiffs ten men looked enviously over at the 16 man Claygate outfit doing their warm up routine – and although Yasin arrived in the nick of time, the T’s were slow out of the blocks.

Claygate dominated possession, making all the running without carving out goalscoring opportunities, the defence of Gary Finch, Pete Markham, Diz Patel the emergency centre half, and Paul Scott doing a good job of keeping them at arm’s length at this stage.

But the game’s first tilt was towards Claygate around the 20 minute mark, in a most unlikely way. Tiffs had possession deep on the right hand side of their own half, when a misplaced pass led to a miscontrol, and the ball looped to a Claygate player 30-35 yards out. Missed passed and miscontrols happen occasionally and there seemed no cause of panic, with men in between the player and the goal. But we hadn’t reckoned for him controlling it quickly and unleashing a 30 yarder, which soared over Clinton in goal and into the net.

Worse was to come when another attack seemed to be under control, only for the forward to whack the ball at the unfortunate right back’s arm from close range. The ref immediately pointed to the spot, and explained his decision by holding his own arms by his sides and saying ‘Your player was like this, his arms were not by his sides.” Unable to argue to the baffling nature of this comment, Tiffs had to watch as the pen was converted, 2-0.

Something changed in the game though, and we started to make some headway especially down the left hand side, where Nick Barras was starting to get the ball further up the pitch. Diz Patel was doing a fair amount of wandering upfield, sometimes leaving us short but occasionally stitching the play together usefully, and it was a move from Nick to Diz and then suddenly Paul Banoub was clear of their defence and in on goal. It was a smart finish, a goalscorer’s finish and he’ll be watching the moment on goalcam for most of Sunday.

Our tails were up, and it was Tiffs who now began to look dangerous. We scored a second, it was Banoub again who came in from the right, and we got a penalty which was converted by Yasin, so 3-2 to the Tiffs.

Still in the first half, and it was time for another freak longshot from Claygate. Tiffs defended a corner, and the ball was well clear of the penalty area, falling maybe ten yards outside. Markham called responsibility for closing the Claygate man down, but before he could get there, the player went for hit and hope. His hope was rewarded, as another 30-35 yard strike ended up in the back of the net.

We scored a fourth, and this time a stroke of luck for Tiffs. Paul Scott, so comfortable with the ball at his feet, floated in a free kick and a Claygate head soared to meet it, but could only knock it past his own keeper. We felt like we were on top when we had our half time team talk.

Matt Seabrook, who had been delayed on his way to the ground, joined the action about five minutes into the second half, and his addition to the midfield did Tiffs no harm at all, as we continued to have the better of the ball.

Eventually this possession turned into goals, when Yasin had some space to the left of goal, and pulled off an audacious lob at an angle which left the opposition howling in frustration.

It got better for Tiffs and worse for Claygate when Ricky, who had toiled up front alongside Yasin for no reward up to that point, seized onto a bouncing through ball and used the outside of his right foot to float a lovely chip into the same corner where Yasin had recently placed his effort.

So with half an hour to go, the Tiffs were 6-3 up – in tennis, that’s job done, but in football, you play on, and that’s what Claygate did, and Tiffs did not.

A Claygate man faced up a packed Tiffs penalty area on the left. The first Tiffs challenge got a nibble but the player was still running with the ball. The T’s then stood back, as the player breached the penalty area, and allowed him to take aim. His shot from just inside the box crept past Clinton for 6-4.

They got into our penalty area another time, no need for concern about the man on the ball, just stand him up and wait for more Tiffs bodies to get back. But our man manhandled the player to the ground, penalty. Clinton read it well though and collected the ball to his body, the score still 6-4.

Another attack, and the ball landed at the feet of the guy who’d scored a long ranger in the first half. He didn’t even take a touch, just curved the ball with the outside of his boot into the top corner from 15 yards at a difficult angle. His goal record in the game – three shots (including the penalty), three goals.

At 6-5, the Tiffs were in a game alright, and didn’t seem to be able to resist Claygate’s onslaught.

A cross was swung in high, and sun in eyes a Tiffs body got there before the three goal man, but the ball was not clear. It fell to their other striker, who looked handy himself, and although he was marked, it was not closely enough and he rifled it into the net.

Minutes later a corner came in, it ended up falling to Mr Hat Trick with his back to goal and under a fair bit of pressure – again not enough though – his angled back heel made the game 7-6.

Disappointing though it was, we’d been involved in a great friendly game, on a vast astroturf pitch which was all good for fitness. Well done to Adam in the middle who put in a good shift and showed good discipline to drop and cover when Diz made forays forward, and to Yazid who often made himself available for the pass from defence, even when under pressure.

We move on – although we’re back in two weeks to play the same opposition at the same ground. We’ll look to do better next time.