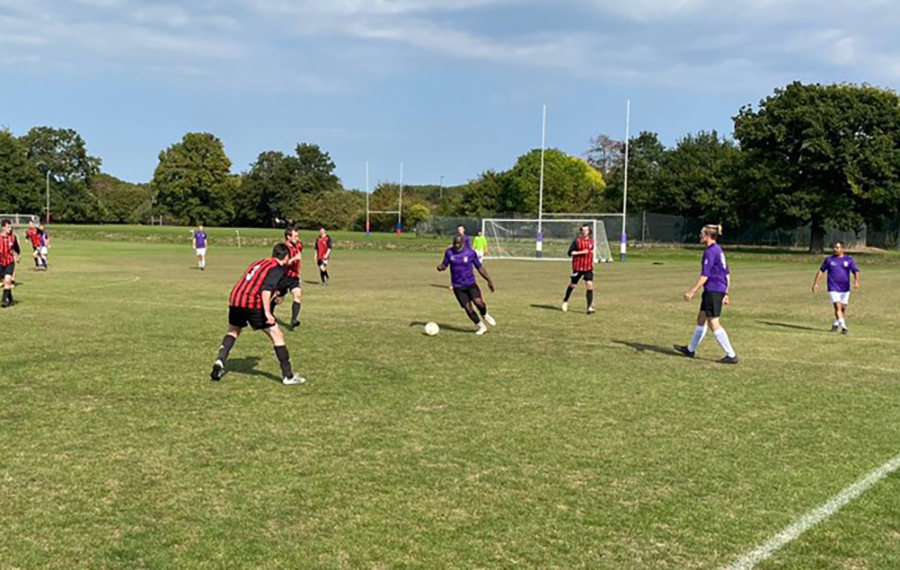 The first game of a new season is always a mix between excitement and nerves, especially so this year with the IV’s having a new look about them.  A lot of players have barely kicked a ball in 6 months and combined with a rock hard pitch the game was beautifully set up for a day of boundless enthusiasm, poor first touches and learning a few names.

Sinjun’s started the game brightest, but weren’t able to make any decent chances in the opening 15 minutes.  As is so often the case, failing to make their possession count cost as Tiffs swept up the field in a lovely flowing move; a few quick passes, a flick and debutant K. Khan poked home for the opening goal of the game and season. 1-0 to the good guys.  Sadly, Sinjun’s weren’t in the mood for a collapse and a late first half rally saw them score two quick goals before the break – the first an awkward bouncing ball that was looped in over the keeper and the second a cross to a unmarked man at the back post who swept home.

A quick half time team talk full of encouragement and cliches and the teams were back out ready to go again.  The first 20 minutes of the 2nd half were evenly balanced before Tiffs were able to get back on level terms when Sinjun’s failed to clear a corner and J. Austen fired in from close range.

The game was finely balanced, with neither team making many great chances, but sadly with 10 minutes to go Sinjun’s broke the hearts of the record Tiffs crowd this season (5 maybe?).  Some good work down the Sinjun left flank saw the ball sit up nicely to be volleyed into the far corner from just outside the box.

Tiffs pushed forward to try to get back into the game but were caught on the break to leave the final score OTFC IV’s 2 – 4 Sinjun Grammarians.  A disappointing loss, but an encouraging start to the season.

Man of the Match brought to you by Banquet Records and a metaphorical backdrop of the boys singing passionately along to Tubthumping: