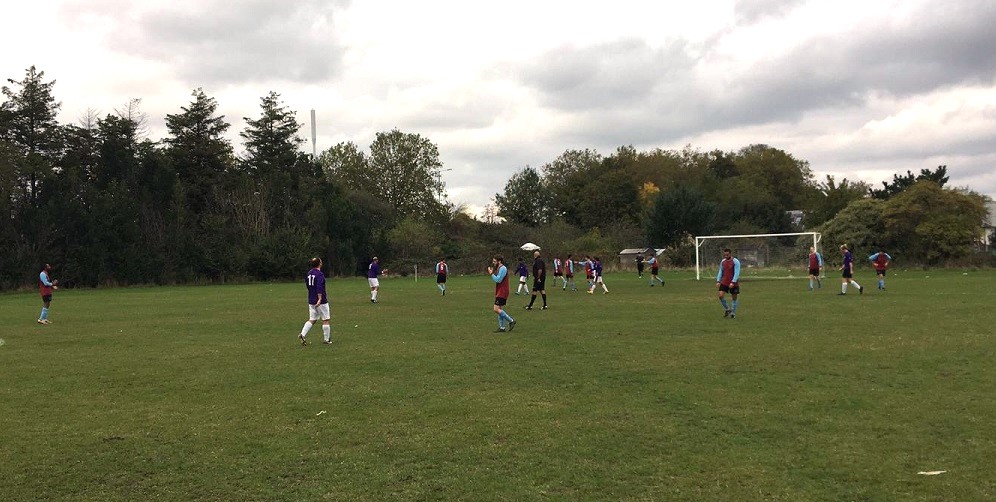 It’s been a tough couple of weeks for Tiffs IV’s in the league so the hope was the distraction of a cup game would get the team on track.

The omens were bad when half the team couldn’t find the ground and by the time Tiffs reached the pitch the warm-up consisted of a quick change into their kit and a jog into position before just before kicking off, the brief team talk still ringing in their ears – tighten up at the back, cut out the soft goals and get the ball forward quicker.

It was a scrappy start to the game, with the pitch made up of equal parts goose poo, stones and bobbles making it difficult for either team to take control or play much football.  Old Meadonians defence seemed shaky from the start but it was Tiffs that conceded first, with a ball down the left channel not being dealt with properly allowing the striker to score from a tight angle.  Sadly Tiffs then fell foul of their old weaknesses and allowed Meadonians to take control of the game with two soft goals, failing to clear their box properly on both occasions.

Tiffs managed to rally briefly and forged a few half chances but with confidence low a good header from a corner left them 4-0 down at the break and staring down another defeat.

The half time break saw captain Conrad Bell talk about playing for a bit of pride and getting something out of the second half at least and with that he made some sweeping changes to the formation.  Jason Austen was moved into defence to provide some youth and pace while Bell pushed up into midfield where his older more experienced legs could try to get hold of the game a bit more, pushing debutant Jackson Pereira into a more familiar left wing role.  The change in shape made a big impact on the game, providing Tiffs more presence in midfield and breaking up Meadonians play more regularly.  Tiffs were rewarded mid way through the second half when some play through their ageing experienced midfield saw Tim Monerville release Kam Khan through on goal to finish calmly into the far corner.  Despite their improved play Tiffs weren’t able to get any further back into the game, despite good chances for Wes Bishop, Jackson Pereira and Dusan Bjedov and with the last kick of the game Meadoniains scored their 5th, taking the shine off a very good second half performance.

If Tiffs can replicate their second half performance for a full 90 minutes next week then hopefully they’ll be able to get the season up and running.