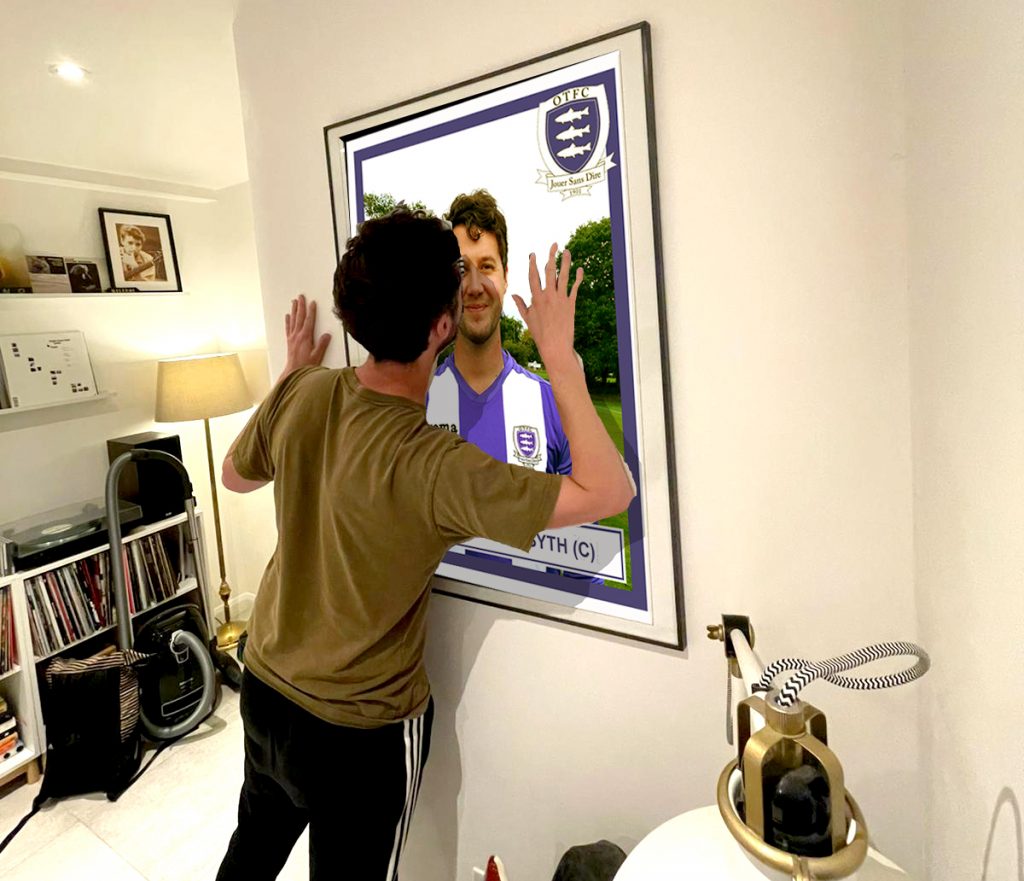 As Tiffs set foot on the hallowed Grist’s turf for the final time of a testing 2020-21 campaign, they pondered what might help them secure their first victory in over five months. Perhaps the fact that their opponents, Old Wokingians IIs, were one of just two teams in the AFC Division 1 South they had defeated this season was reason for optimism. But skipper Forsyth was leaving nothing to chance. Showing tactical flexibility and superstition in equal measure, changes were made to the usual pitch (far one), kit (orange) and formation (4-2-3-1) as he sought to exploit all the fine margins he could to gain three vital points and stave off the spectre of relegation.

A questionably-led warm-up under their belts, duly accompanied by fun fact tales of dubious game show appearances, the home side started brightly and were soon rewarded with an early lead. Owusu found Hutcheson on the right, he slid the ball across for Bettis six yards out, who in turn made no mistake, the team’s marquee striker slotting home for his first goal of the season in their *checks notes* 15th (fifteenth) game.

Tiffs looked to capitalise further and almost had a second minutes later. After some excellent one-touch aerial link-up play around the box that belonged more to the sands of Copacabana than the meadows of Elmbridge, an audacious outside-of-the-boot volley from Hucks looped narrowly wide. The hosts were in the groove, but how long would it last?

Stung by the start made by their opponents, Wokingians grew into the game as the half went on. On one occasion, with play breaking down deep into Tiffs territory, the visitors worked an opening on the edge of the box and a fine low strike left Rose rooted to the spot. 1-1. The momentum having swung, they were in again shortly after. Another firm hit from distance cannoned back off the bar, to spurious claims from Rose that this was via his outstretched fingertips. This was about as unlikely as it was irrelevant, however, as the rebound fell to a Wokingians attacker, who smashed the ball into the top corner to complete the turnaround.

Slinking off at half time 2-1 down, you would have been forgiven for thinking this was going to be yet another one of those days in a season of those days for The Unlucky Guys. But something felt different this time. Was it the incessant vociferous support provided by Tiffs’ solo canine ultra? Or the touchline arrival of the Crippled Cripps – Wokingians’ tormenters-in-chief from the reverse fixture – striking fear into the away team? Or maybe Sadler’s polite questioning of their number 9 as to “WHAT DO YOU THINK YOU’RE DOING?!” just before the break lulled the visitors into an introspective trance?

Whatever it was, Tiffs emerged from the interval with fire in their bellies and the inspirational words of Forsyth, Rose and, to an extent, Kimber ringing in their ears. With a renewed focus on #buildingfromtheback, the hosts’ efforts began to pay dividends. Once again, Owusu was pivotal, slipping it through to Bettis on the edge of the area. Still with plenty to do, the veteran striker turned their centre-back inside out and tucked a left-footed shot past the keeper with the kind of aplomb only seen in the most seasoned of finishers. Form temporary, class very much permanent and it was level again at 2-2.

When it rains it pours. Moments later, the scintillating Hutcheson received the ball on the right, sent in an inch-perfect cross to where the man of the moment was stationed and he glanced it expertly into the far corner. Bettis had completed his perfect hat-trick, the wildlife had returned to the oceans and nature was healing.

With an elusive third victory of the campaign in sight, Tiffs set about making the game safe. Wokingians were tiring and with space beginning to emerge in behind, Hutcheson played Birse in down the right. His cutback was met by the onrushing Gledhill, who volleyed into the corner with trademark composure to give the hosts the two-goal cushion they craved. Meanwhile, Cripps, J. looked on in dismay as his top goal scorer tally for the season was finally matched by someone who had made more than five appearances.

As the clock ticked down, possibly the greatest threat the visitors offered was in furiously contesting the deliberately provocative and surprisingly convincing suggestion from within the Tiffs ranks that Wokingians’ striker was not allowed inside the D from their opponents’ goal-kicks. That aside, the home team saw out the rest of the action with relative ease. Victors not only on the scoreboard, Opta sources can also confirm that they ran out comfortable winners in the key metrics of xG, xP(assion) and xC(ommitment).

Celebrations for a result that catapulted Tiffs up to the dizzying heights of 7th began in earnest, with not a single social no-show to be reported. Pitchers were purchased and the formality of the MOTM award to Bettis was completed, to the evident disdain of some. As if things could get no better, there was even time for a welcome bruising of Kimber’s ego as he was roundly beaten by Enright in the race to determine the Team’s Slowest Centre-Back, a title that was already obvious to pretty much everyone except Kimber and Wokingians’ number 9. The time when Tiffs’ resident key worker emigrates across the Irish Sea surely cannot come soon enough for his defensive partner.

All told, on the day when football’s undisputed King of Character led his team to FA Cup glory, this quality was certainly on display in abundance just a few miles to the south in KT8. Forsyth, as Rodgers, will have given the life-size self-portrait that adorns his living room a long, deserving kiss before bed.

Man of the Match brought to you by Entocycle:

And in case Kimber forgets…