OTFC Is vs City of London 30th January 16 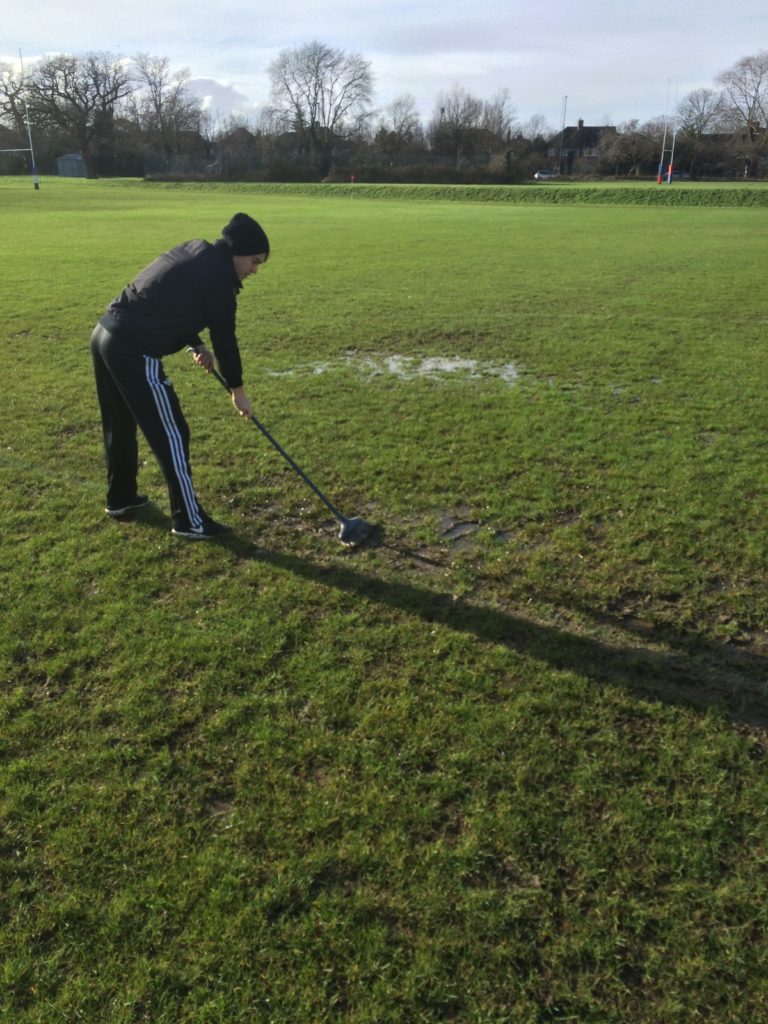 It had been a while since I’d last pulled on the famous purple shirt, largely due to a series of Christmas-themed weddings and a week of shredding some raw pow and generally sending it in Morzine. I awoke on Saturday morning refreshed after a civilised Friday evening expedition to London Bridge’s finest social establishment, the Rake. The sun was out, the birds were singing and a gentle force 8 south-westerly was blowing across the hallowed turf of Grists. I arrived at the ground remarkably early, nearly a full hour before the game, to see Seb walking back in and muttering to himself after what was likely his 3rd pitch inspection of the morning. Seeing a cast on his right hand, I enquired as to what had happened, assuming that it would be the result of a heroic last ditch challenge at some big, hairy striker’s feet. “Punched my mate in the arm and broke my thumb” was the considered response from the manager. Now I profess no expertise in hand-to-hand combat, but I believe that conventional wisdom proscribes the use of knuckles for punching, rather than leading with the thumb. Should anyone be interested, there is a full run-down of how, and where (strangely enough the arm is not a traditional target) to punch someone here: http://lifehacker.com/5829523/how-to-throw-a-punch-correctly.

So, back to the football. The changing room was full of the thoughtful, deep-thinking, intellectual individuals that typify Tiffs 1s football. Then Wightwick hit me in the nuts. The buzz of excitement was palpable, and, satisfied that everyone had managed to attire themselves correctly, we headed out onto the pitch. Still a good 45 minutes to kick off, so we used the time well, shooting from corners, improving our touch with keepy-uppy and working on our accuracy by pinging balls at whoever had run off to relieve themselves in the nearby bushes. The oppo rocked up about 10 minutes before kick-off, by which time we were ready for an inspirational talking-to from The Manager and Captain for the day, Slewis. We set out with a system, four at the back and, I think, 6 players in front of them. Due to the Manager’s injury, Mr Whitwick had drafted in a GK from his year 9 subjects, Jim-lad. The remainder of the team looked as normal, barring the presence of D. Harry, who had elected to spend the week lying down in the alps, rather than on the pitch at Grists. The team would setup with a strong back 4 centred around the evergreen Sniffer, ably supported by Fuse, Kieran and Steve, a midfield five of Nutty, Mr Whitwick, Kuldeep, Ollie and Slewis, and Alan (we love you Alan we do) up top. A perfect balance of experience, youth, speed, aggression, skill, vision, guile, weight, athleticism and male pattern baldness I think you’ll agree. Messrs Matthews minor, Bruno and Evans started on the bench.

Tiffs started strongly. We looked comfortable on the ball, closed down well when not in possession and communicated loudly and violently with one another. The left wing was particularly productive, with Steve getting forward and feeding Slewis well. The first 40 passed relatively quickly due to the highly competitive nature of the game. The Manager at this point made a tactical alteration, relieving Nutty of his duties, pushing Slewis into the centre, and bringing on the cultured left peg of Matthews Minor on the left wing. Shortly after this, with The Manager having realised there were two Matthews on the pitch, thereby breaking one of the fundamental rules of football, Seb hooked Fuse for Evans. A lot of the game was being played in the centre of the park, which was, due to the flood-plain dynamics and groundwater profile of the local area, something of a quagmire. Less than pretty. A City of London break handed them a corner. What followed must have been a training ground drill. Disguising their corner as a god-awful delivery, the corner-taker rolled the ball gently to the edge of the tiffs area. The oppo centre-back then did his best impression of Tom Watson, pulling out the old 64 degree wedge and slicing the ball over the melee in the 6 yard box to sneak under the bar. 0-1. Upsetting.

The second half was more open than the first. As both teams tired from the heavy conditions, Sniffer started to have flashbacks to the battles he fought as a young man at Ypres. Jim-lad in the tiffs goal made several great saves, demonstrating his cat-like reflexes, most likely fuelled by the fires of pubertal change. At the other end too, Ollie and Matthews Minor were finding space and causing problems. A free kick 35 yards out presented Matthews Minor with an opportunity to draw on one of his specialties, the wind-assisted assist. Mini/the wind floated the ball in beautifully. Sniffer, refreshed by his memories of the advance at Messines Ridge, danced into the box, dived like a mature salmon and flicked the ball into the far corner. 1-1. Rancorous celebrations.

With Bruno introduced into the fray prior to the goal, tiffs pressed for the advantage. Possibly a bit too much. Slewis dived into one of *those* challenges just outside the oppo area with one of the City of London centre backs. Slewis tried to make up for his massive weight disadvantage with the usual speed, aggression and gusto that trademarks his approach to challenging for the ball, and did indeed win the ball, but may have slightly overcommitted. I don’t know how much you know about the human knee, but it’s a complex pivotal hinge joint that, crucially, flexes in only one direction; forward. Slewis, as one of life’s innovators, was probably attempting to extend the boundaries of human performance, but instead just broke his knee. Cue call for an ambulance, Kieran massaging Sam’s feet in an overtly homoerotic manner, and calls from Mr Wightwick to “get him off the ******* pitch”. We did indeed get him off the ******* pitch. Top marks to Slewis for putting up with what must have been a considerable amount of pain as he was clumsily evacuated to the sidelines, and then evacuated a couple of metres further when we realised he was probably a bit close.

The game continued. Tiffs, shocked by the loss of their on-pitch leader, restarted badly, but defended solidly nonetheless. Then came the sucker punch. A speculative City of London long range shot swerved unfairly in the force 10 gale just in front of Jim-lad, either that or something is affecting his eyesight…and whilst he still made a good save, we didn’t react quickly enough to clear the ball before the oppo striker tapped in for 1-2. Dissatisfying in the extreme. That was pretty much it for the football, but the Slewis saga continued. Two ambulances turned up, fed Slewis a combination of laughing gas and morphine (at which point he went from hypothermic to hysterical), and left. Seb then performed his final (post-match) pitch inspection in the darkness and retired to the clubhouse. The team kindly saved the remainder that had stayed outside with Slewis some pizza (we are nothing if not a team), and we got down to the serious business of the day, PINTS and attempting to head a ball into a bin without doing too much damage to the clubhouse. Kuldeep had to take some time out mid bin challenge after stating that there was “too much product” in his hair. No words. Our efforts to get the ball in the bin were as fruitful as those on the pitch – a lot of work left to do before we become a viral sensation.

In summary, a good game of football marred by an injury, not winning, tyre tracks on the pitch and conceding two soft goals, but followed up by a remediative selection of Domino’s finest and large numbers of PINTS. As the lads dispersed, Kuldeep realised that he was 5 hours late for a date with his girlfriend, OF 4 YEARS. Top work. Get well soon Slewis.