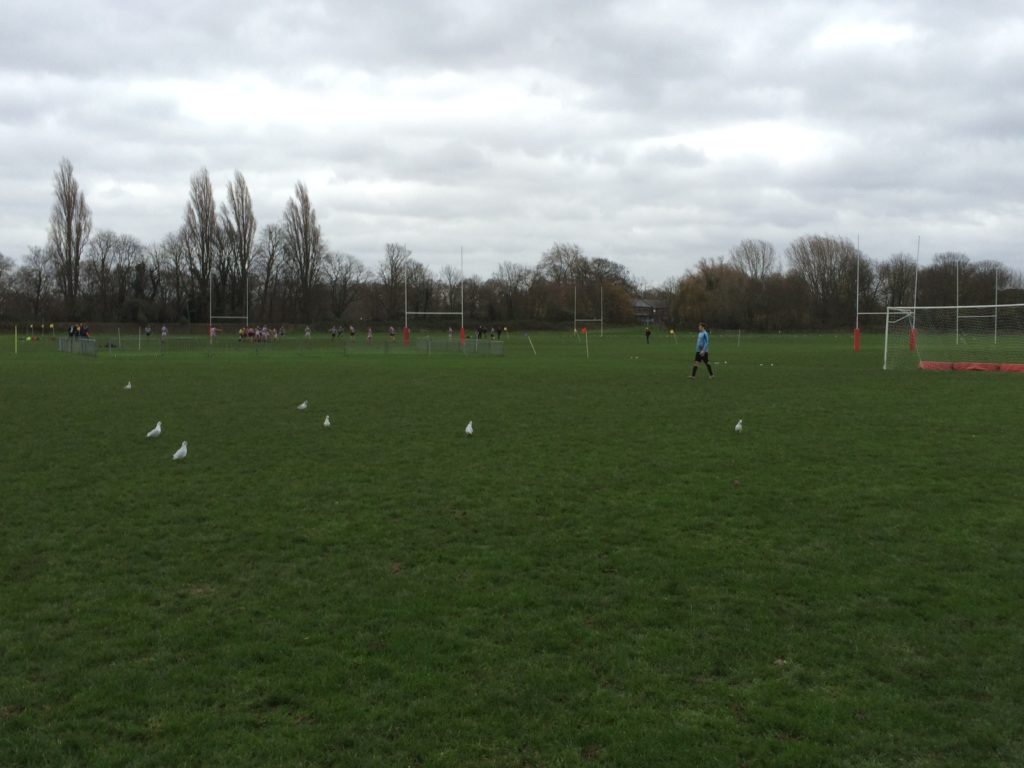 It was a blustery Saturday in Barnes. The sky was grey, the pitch was small and there was the usual abundance of sea birds on the pitch. However, the Tiffs didn’t care,  we had a full squad and the Christmas jumpers were packed and ready for the evening. The banter, like the freshly mulled Lucozade, was flowing and the joy and excitement of Christmas was in the air. ‘Twas the day of the Christmas social and all, for a change, was well.

The match kicked off and the Tiffs immediately had the momentum. The wind quickly became our friend with two looping Joe Matthews set pieces being palmed in by the Regent’s keeper and another attempted strike being finished off by Olli Robini (he’s only 16).

Keiran O-W and John Owens were determined to keep the match within Regent’s grasp by falling over and repeatedly kicking the ball up in the air respectively. Tom Scott was given a break from deliberating whether mince pies had meat in them and was brought on for “We love you Alan we do” late in the first half. Scotty made an immediate impact with an apparently “quite good” goal from outside the box which the author had missed whilst relieving himself in a nearby bush (ker-ching).

More football followed and at the half time whistle it was 4-0 and things were looking good. After the customary loud and insulting Wightwick half time speech the Tiffs kicked off against a revitalised Regents. It was clear that we were under the cosh as a flock of seagulls had descended and started casually wondering around the Regents’ half. However, the Ts responded with Charlie refusing to take the resurgent Regents lying down and Fuse, er….. Lying down.

There was more kicking the ball up in the air and then it was time for some substitutions. Youl and Harry were brought on to sure up the vulnerable right hand side and were creating penetrative runs from the outset. Youl was understandably rusty yet proved that he still had the touch when it was needed as he and Dirty caught the Regents’ left wing, which had grown accustomed to a less attacking and more receding Ts right hand side, off guard on several occasions.

Two late goals from Regents (both (ok, maybe one) through uncharacteristic Ts errors) provided some late excitement but the Tiffs quickly closed the game out with a Tom Scott assisted goal from “Oh Alan we love you”.

The match finished 2-5 and the Ts were ready to celebrate. Joe Matthews was the controversial man of the match with the wind and the Regents’ keeper tying for second. Joe donned his Santa outfit in style whilst his brother, as usual, went out of his way to wear female attire despite being under no obligation to do so.

The Xmas social followed with games of Spoof (never celebrate), The Witch (the what?) and that new one for which (the what?) no one knows the rules. The day was rounded off with a Christmas meal at The Spring Grove with drinking games, speeches, singing, hugging, kissing and the like. Who knows what followed as the writer left the youngsters to enjoy the delights of Kingston whilst he went home to four PINTS of water to ensure the hangover wasn’t too bad the next day.