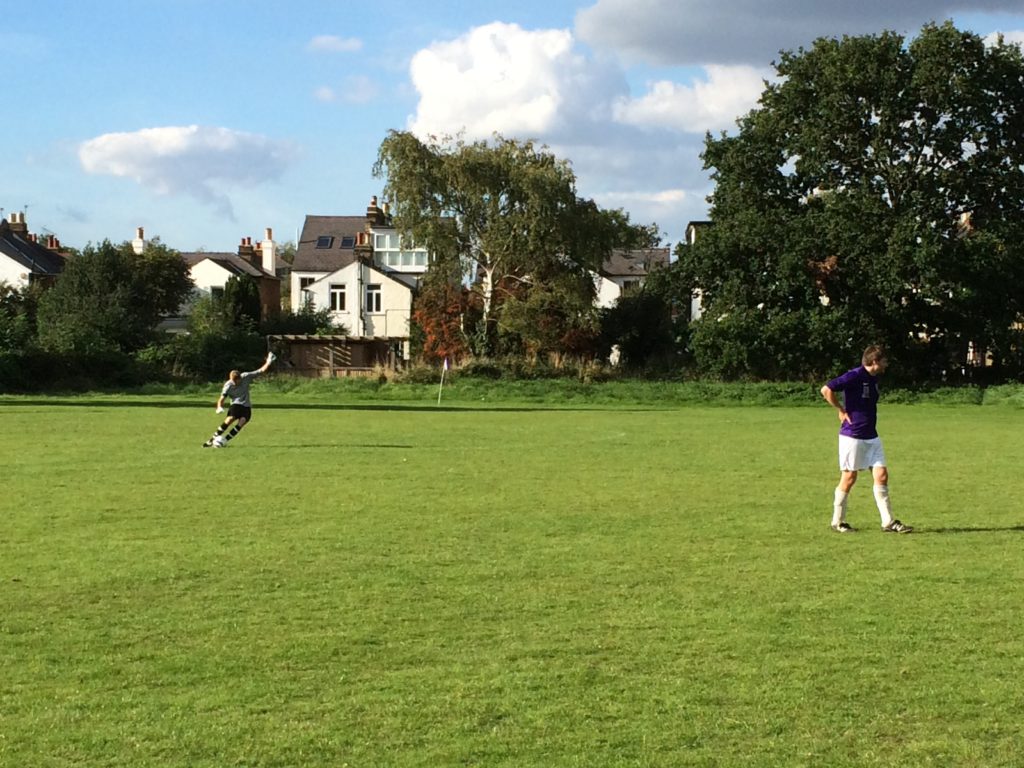 As a general summary of the game, a neutral supporter would probably have described this match as “pretty poor” and “extremely boring”. However, having been involved in the game, it was a lot worse than that.

Tiffs started positively straight from the ref’s whistle. A delightful one foot pass from the centre spot by Joe “the schlong” Matthews was forward and one of the few in the first half that we managed to play on the floor to a purple shirt. Unfortunately, it went downhill from thereon in.

A somewhat innocuous pass within the first 3 minutes from the Woking midfield seemed to be rolling in to a well covered area of the right channel between new recruit, Sam “the Tin Man” Centreback and Steve “Sing to me” Goodings. Despite Sam going on to clear up a number of long balls from Woking throughout the rest of the game and putting in another solid performance at the back, he failed to mention that he has an invisible parachute permanently sewed into his back that disables him from running very fast. Their big, muscley striker stormed through and coolly played a cut across the six yard box for one of their other players to slot home.

A nightmare start for Old Tiffs.

Old Tiffs managed to pick themselves up and had some bright spells in the second half. When Sam “Need a very full pint to dick and bang it” Lewis wasn’t dreaming about what he would get up to later that night, he worked well with Goodings and Dave Harry to work the ball up the pitch.

Vince from Recess, playing in his new position in centre mid, worked extremely hard throughout and managed to break up play well in more of a holding role. This allowed Ollie to get involved when going forward and when he wasn’t finishing his maths prep-work, he played a couple of delightful balls over the top for Dave Harry. Harry had his zimmer frame on the top off-road speed setting but missed out by millimetres on both occasions.

His zimmer frame did not let him down though and Harry worked tirelessly with Jo Matthews throughout the first half, albeit with little support from midfield.

Seb Rose was cleaning the muck off his legs when Fuse managed to clear the ball off the line whilst having a nap in the goal mouth, following a classic S Rose headless chicken sprint off his line.

In a half that seemed to lack passion and commitment, the back four were surprisingly well organised and dealt with Woking well.

Going forward, there were few chances in the first half. S Goodings whipped a great cross to the back post which later turned out to be a shot, the Schlong Matthews was unlucky with a half volley from 25 yards, which he would usually bang top corner, when he seemingly decided to hoof the ball out of play and, finally, Vince from Recess was unlucky with a confused shot from 40 yards.

At half time, Tiffs were riled by Wightwick’s speech that was entirely focused on the post-match Domino’s pizza. Screaming and spitting, he was seething with anger at the impossibility of eating Domino’s at half time as well.

Tiffs were a better team in the second half and worked harder. Fuse only spent 40 minutes lying on the floor and Lewis ran more than 100 metres.

Seb was brought into action, in between signing autographs for passing Ed Sheeran fans, making a good low save.

Again, the Tiffs back four did well to stop Woking who were quick to counter when Tiffs were pushing forward.

D Harry came close with a back post header similar to the one he scored back in 1961. Rhys did well to break into the penalty area but was unable to get the ball out of his feet to get a shot away.

All in all, a reasonably unlucky performance and definitely deserved a point.