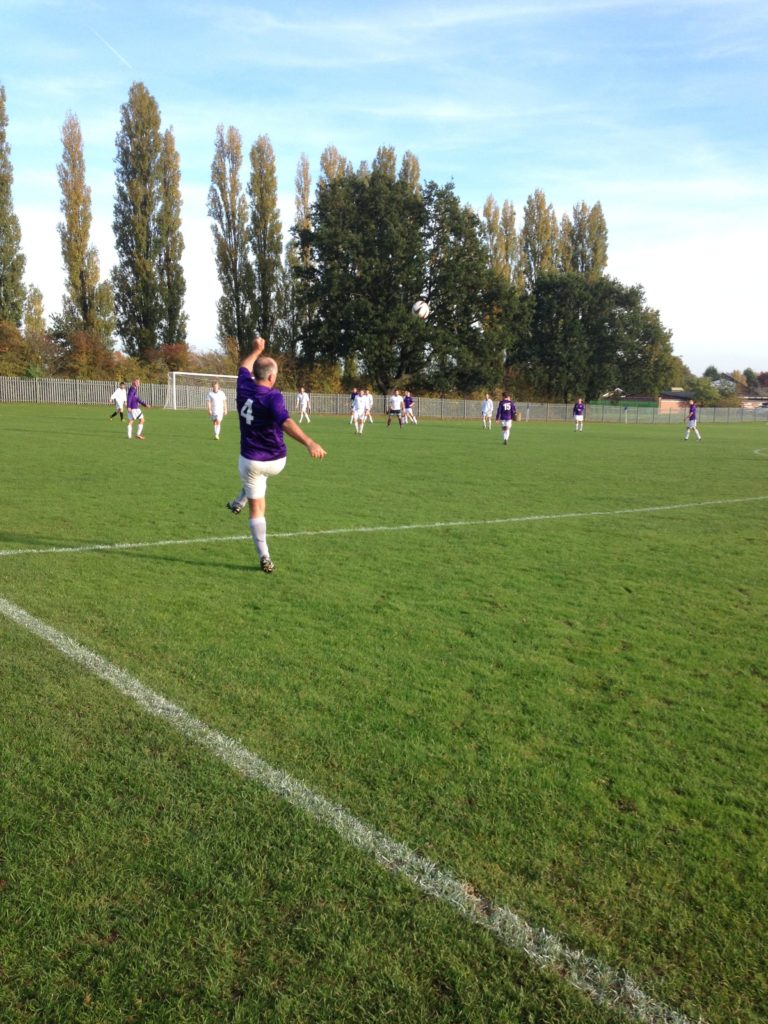 In a land far, far away (New Eltham) the bare bones of an Old Tiffs squad turned up rip-roaring to get our first points of the season.

With much trepidation as to what to expect in this part of the world, our 11 motley men found a tasty pitch to play our (now becoming fairly slick) brand of football. Buoyed by the knowledge we had our very own effeminate elven goal machine up front, the boys seemed to be in a confident mood.

The purple headed warriors began with the majority of the possession and all the early chances. Utilising their single goal threat tactic, the oppo got it up to their striker and, with literally their first meaningful attack, went 1-0 up.

With Old Tiffs enjoying most of the possession, we finally put one of our many (and in some cases ‘easier to score than miss’ – yes that’s you perma-perm Tingle!) opportunities to bed. The elven Alan selflessly got us back to 1-1.

The ref had a willingness to flash his wares. After about the 9th heavy tackle in 15 seconds and a high-brow discussion with Tom W, the ref showed Rizzo a yellow. A second yellow for the oppo was also shown. After a fairly upbeat half time talk, the mighty Ts returned to the field confident on putting Old Sedcopians to the sword in the second half.

With the sprightly Ollie and the forever sprightly Dave Harry running the wings we created multiple chances, but frustratingly were unable to take the lead (Dave – what is your secret to the elixir of youth? Babies blood?).

As per usual Sniffer – all 5’5 of him – time and again rose majestically to win 99% of the headers at corners (Editor’s note – the other 1% flooring anyone in his path). With a perfectly flighted ball to the back stick, up rose Sniffer, like a lean, slender salmon. With a mighty roar, eyes on the prize, forehead primed and even thoughts of how to celebrate what was surely about to be a thunderous header into the back of the net, up jumped Keiran to nip it off and over his left back’s head.

Finally, the pressure counted and on only his 19th golden opportunity Alan put us 1-2 to the good. With Wightwick’s tactical nouse of, “Keiran, man mark their only goal threat” the Purps looked good for the win. Even more so, when the foul-mouthed striker was shown a red!

Unfortunately, Salad Fingers was ‘to the rescue’. Generously dropping the ball under pressure from a 4’11 attacking player, which allowed the score to be levelled to two apiece. In his defence, Seb had zero protection from the onrushing opposition.

Special mention to Charlie for playing out of position and putting in a MotM performance.

Post-match in the pub, we finally caught sight of our usual midfield stalwarts Sam and Nutty, silently sipping a pint!

On what was the warmest Halloween in history, Old Tiffs finally got a solid point from a tricky away fixture, and our league season is finally up and running. Roll on the next MASSIVE game!!!