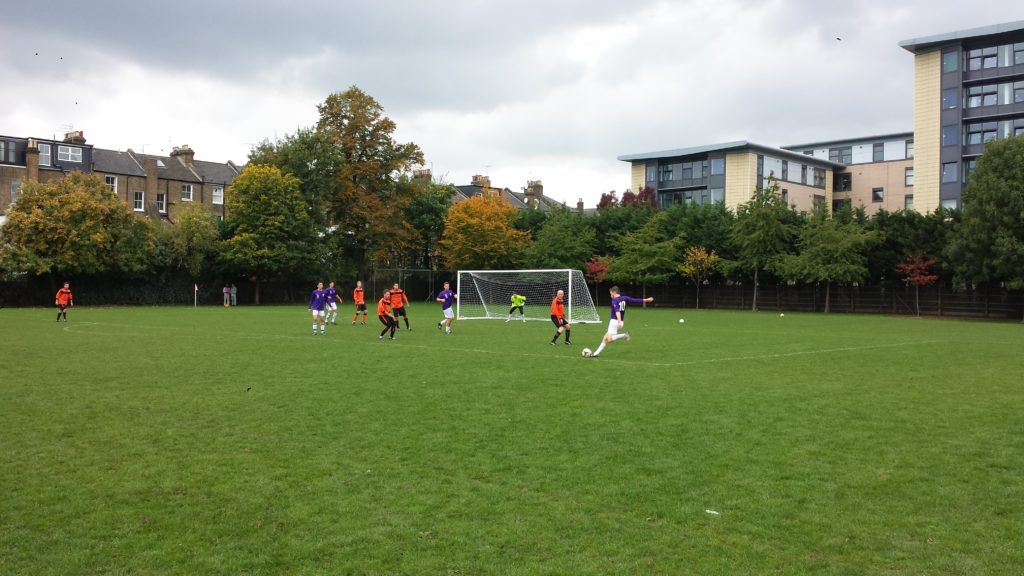 An away day cup match is often a daunting prospect based on the current cup form that Old Tiffs have been experiencing and this was no different. Schlepping it up to Tuffnel Park, North London, not a single person in the Old Tiffinians 1st XI expected to take anything from this game.

In usual fashion, Steve turned up wearing another man’s boxer shorts and the Fuse brothers were both late having bulldozed their way through three McDonald’s breakfasts by 11:30.

The warm-up commenced in usual fashion, but an authoritative Tom W took control. Having attended AFC Wimbledon earlier in the week to take inspiration from Akinfenwa, his idol and benchmark performer for incessant weight gain, he decided to try something different. The players were worried – they hadn’t done anything like this before. A real warm-up. A warm-up that existed more than running seven yards and making the exact same hilarious jokes that are made week-in, week-out. Seb began crying and muttering “I’m sorry” repeatedly. The players formed a circle, did high knees, sprinted like gazelles, then turned around and sprinted back. They did it four times. This day was going to be different.

Old Tiffs started well, pressing Old Mags in every area of the pitch. Dave H and Alan seemed to have some kind of connection. It was almost like they had brains and they were using them in the football match, a far cry from the likes of Pete “one track” Osborne. In the first two minutes, a delightful through-ball from Dave played the new kid in behind. Alan did well to compose himself and smoothly chipped it over the keeper. A great start.

Old Tiffs didn’t let up and continued to press the opposition, forcing errors in every position. The pressure was rewarded from an unlikely source as Sam L used his non-existent pace to somehow surprise the opposition goalkeeper. Doing the only thing that he knows how to do, he charged like a fat Razor Ruddock to aggressively nip the ball off the keeper and, somewhat out of character, calmly slot one home from three yards.

Old Tiffs did get the ball down in the first half but the match was won in the midfield with continuous pressure and closing down. Every goal kick was being eaten by Greg in centre mid. He was literally laughing his head off each time the ball came flying towards his enormous head. At one point, even Joe Matthews managed to win a header, with the head of his body, when the ball was in the air.

There were more chances in the second half. Sam L, again in the box managed to tackle himself in the first few minutes of the second half, Fuse won a header from a corner that looped towards goal and Sniffer had a header cleared off the line by the Old Mags centre mid.

The third goal came as the young Alan closed down the goalkeeper, again, and scored from a tight angle.

A bizarre sequence of events unfolded in the second half as Tom W was put up front, Old Tiffs really enjoying themselves at this point. With the opposition defence struggling to navigate around this rig, he did manage to hold the ball up nicely. His easy work paid off with an assist, playing Alan through for his hat trick, banging the ball past the keeper low into the back of the net. A great performance from the new recruit, however, it was unclear whether Old Tiffs were excited about his goals or getting another young man in the squad. Whichever it was, it was exciting.

Tom W’s Akinfenwa-modelled physique came into its own as he cushioned the ball with his enormous moobs and spanked one goal-bound on the half volley. A good save from the keeper kept it out.

Solid performances all round the pitch helped Old Tiffs keep a clean sheet for the second week in a row. Seb tried his best to concede, running out with the ball at his feet and his eyes closed for a laugh, but it didn’t work. Keiran, Tom and Sniffer didn’t have a huge amount to do but mopped-up everything they needed to, which left Old Mags with little to play with. Steve was so bored with how easy it was that he decided to boot the ball out for an opposition throw-in at every opportunity he had.

A great performance from everyone on Saturday and a spirit that should be taken forwards to the next match. Man of the Match went to Alan. Man of the Pub probably went to the three players who downed their pints in a show of respect to Alan, the hat trick hero.