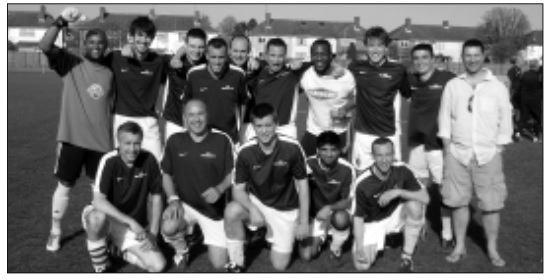 The largest crowd of the season descended upon New Malden full of Christmas cheer ahead of the big match. The usual preparations were underway, but there was a glint in the eye of some of the more experienced members of the squad. They were there, but yet they weren’t there.

The support, the venue. The faces. The bellies. They all harked back to a different time. A better time. Where success was forged upon the abdominal muscles of James Evans, where tackles were full-blooded and took no prisoners, where short corners were not simply frowned upon, but were punishable by amputation of the offending foot. And where Old Tiffinians dared to dream.

The year was 2011. It was a fine summers afternoon

Saturday 9 April marked an extraordinary day in the sporting calendar, the Grand National at sunny Aintree, the penultimate day of the Masters from the manicured lawns of Augusta, and more significantly, the final of the London Old Boy’s Challenge Cup, live from the London School of Economics Sports Ground in New Malden, Surrey. Having felled such mighty London Old Boy oaks as Fitzwilliam Old Boys, Oakhill Tigers, Tilburg Regents and Old St Mary’s en route to the prestigious final, the Old Tiffinian axe was sharpened for one final swing. Only Queen Mary College Old Boys stood between the T’s and LOBCC glory.

A rousing, yet borderline-incoherent pep-talk from player-manager Tom Whitwick was enough to whip the squad into delirium before kick-off, an energy they would look to channel more effectively during the match itself, than via the familiar battle-cry in the dressing room beforehand. A starting XI, that had served to raise some eyebrows among the capacity crowd when the squad was announced, began the game in typically cagey fashion, with errant passes and miscommunication a feature of the opening exchanges. When the Queen Mary right midfielder switched sides after a break-down from a Tiffinian set-piece, few expected the young Korean to dispatch a fierce half-volley from the edge of the area that would nestle in the corner, but this he did, and with gusto.

Some frank exchanges between the Ts midfield and defence ensued, in which the familiar volley of buzz-words such as ‘communication’, ‘organisation’, and ‘1st and 2nd ball’ came from the more experienced squad members. As the Ts settled into the rhythm of the match, and became more aware of the threat that QM posed, they were afforded the opportunity to impose themselves on the game in more attacking areas.

John Owens and Matty Cardell both managed to break the QM line, only to be denied by a combination of astute goalkeeping and desperate defending. On the half-hour, Queen Mary’s sought to take advantage of the higher Tiffinian’s defensive line, by springing a counter attack that put their earlier goalscorer clean through once more. A second goal looked a certainty, until Mark Tachon , who has enjoyed a super season at left-back, scampered back to put in a vital block.

At the other end of the field, attacking into the wind was proving to be a relatively thankless task for the Old Tiffs, who had exerted sustained spells of pressure without creating any genuine chances. That is, until the ball broke to Joe Matthews, who was twenty-five yards from goal, and had moved inside to support the strikers from a Tiffs set-piece, when he was felled by a clumsy tackle from a QM mid-fielder; a moment which would prove to be the game’s coup de theatre. Matthews dusted himself down, and unleashed a curling free-kick that looked like it might level the scores, until it crashed off the underside of the crossbar. Thankfully the experience in the Tiffs central midfield paid off, with John Atkinson and Dave Harry timing immaculate runs into the six- yard box. It was the latter who was rewarded with a simple header into the unmanned QM net, and the canny Harry made no mistake. 1-1 it remained at the interval.

During the half-time break, and at a safe distance from the opposition, the Ts went about plotting their second half battle-plan in typically parliamentary counsel. The old guard; Atkinson, Harry and Justin ‘Sniffer’ Smith taking the mantle, and quite rightly preaching ‘passing football’, ‘width’ and ‘penetration’, With a heavy wind set to be behind them, the Tiffs had every right to an over-riding feeling of cautious optimism, but the message from the gaffer was clear; there was to be plenty of talking and no need to panic in possession. This message was spectacularly ignored two minutes after the restart, when the otherwise rock-solid James Matthews and stylish deputy centre-half James Evans both shirked responsibility for a looping long ball from the QM back line, sending the swift Korean through for a third time. Only the presence of on-form Lewis Hamilton in the Tiffin sticks was enough to force the young winger to plant his finish inches wide. This was to be one of few threats on the Tiffin goal in a frenetic second half.

Old Tiffs were using the wind extremely cunningly, resisting the urge to send raking passes to a front pair who prefer the ball to feet, and instead getting the ball to Owens and Joe Matthews to trouble the QM rearguard from more dangerous angles. A flurry of half-chances were created from well-crafted attacks, with Dave Harry and John Atkinson fully justifying their selection by gaining ascendancy in a busy and combative midfield. It was from such a scenario that the Tiffs were able to gain a lead for the first time in the match. Joe Matthews once more turned provider when he drifted past his opposite number before sending a hopeful ball into the QM box. It looked a routine take for a tall QM keeper, and would have been had the dynamic Dave Harry not rolled back the years once more, and put his head in bravely, to claim an unattractive, yet pivotal second goal. It was just reward for a genuine Tiffin Old Boy, who had kindly delayed his third ski holiday of the calendar year to be part of his first cup final in 15 years.

The second Tiffs goal seemed to knock the confidence of the QM squad, who dropped increasingly deep, inviting further danger from a rampant Tiffs team. John Atkinson saw a back-post half-volley well saved, before shanking another chance wide, having made space for himself with a stylish flick. Tom Whitwick sent a looping header goalward which looked to have won it for Old Tiffs, only to strike the inside of the post and dribble agonisingly across the face of goal. The tireless Wightwick spurned another cup-winning opportunity, getting underneath a simple chance created expertly by Matty Cardle. With no third goal, one sensed that QM still had the shred of hope they needed to create a final chance.

And so it was: a ranging ball was sent from left to right by a QM midfielder, and was met with a goalbound prod from their centre- forward. With Lewis Hamilton beaten extra-time was on the cards, until the evergreen Justin ‘Sniffer’ Smith, always a great reader of the game, managed to bundle the ball wide. From the resulting corner there were yet more heroics on the Old Tiffs’ goal line, with John Atkinson clearing a certain leveller, an act which saw Tiffs over the line. Fittingly, it was a former Tiffin student, one of seven in the squad, who was to be the hero on cup-final day.

Honourary mentions must go out to Si Keen, who came off the bench to solidify the Tiffin defence, Humza Vanderman who would surely have started had he not broken his nose giving his all in the Quarter Final, Chike Okwuadigbo, whose goals got the Ts to the final, Jason Surname, for his outstanding glove-work in the season to date, and all who missed out through injury, absence or squad rotation. The win was watched by a partisan Old Tiffinian crowd, whom the squad remain grateful to for their vocal and loyal support.