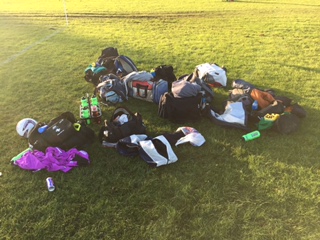 The Old Tiffinians 3rd XI experienced victory for the second successive week against a resilient Wokingians.

The purples started well, keeping possession by playing the ball on the floor and good movement on the wings with both full-backs overlapping on a regular basis. Excellent defence and anticipation high up the pitch enabled the IIIs to build pressure on Woking and keep the ball for long stretches.

The first goal came from the skipper, Ciarán Morris. Baptiste Reynaud’s fine effort rebounded off the post and fell kindly to Morris, who buried the ball into the net.

Tiffin let the opposition back in to the game far too easily. Woking’s speedy number 11 got past two defenders to square the ball to their unmarked striker, who tapped the ball past Andy Johnston.

OTFC built pressure again, Laurence Hinton going close with a header from a corner and Lewis Baister turning in the area to unleash a shot which a Woking defender stepped into and bravely blocked. Tiffin’s second goal came soon after. A shot from Baister was saved, but fell to Charlie Hughes who smashed the ball into what looked like the side‑netting, but was actually inside the near post to give Tiffin a well-deserved 2-1 lead.

After some sloppy football, a high ball came in to the Tiff’s area towards one of Woking’s more elderly players, who was ‘gently shoved’ in the back by Hinton. The referee had no option but to award … an indirect free-kick. Woking protested about the decision, but soon ceased as a four-man wall and Hughes on the post had no chance when the ball was played back for Woking’s striker to dink the ball over everyone to the top corner. There was still time for Mike Lutz and Lee Orchard to demonstrate the accuracy of their passing by hitting the Woking winger in the head with attempted clearances twice within seconds.

A frustrating half ended at 2-2. The purples knew that they could play better and get the win against the bottom team of the table.

Tiff’s third goal came from the ball being knocked down by Ben Williams to Morris, whose strike was expertly deflected by Laurence “He knew what he was doing” Hinton’s abdomen to the net. Tiffin were delighted to regain the lead, but it lasted a matter of minutes as the Woking number 11 was given time to run and play a through ball to Woking’s number 9, who ran straight through the defence to slot the ball past Johnston.

With not long to go, Williams managed to secure victory for OTFC by taking a powerful and speculative shot from long-range, which Woking’s keeper didn’t manage to keep out. When the whistle finally went, Tiffin were happy with the 4‑3 victory, but disappointed by the general performance. We had played much better earlier in the season, and were sloppy against Woking despite coming out as victors.

Congratulations to Andy Johnston who won his second Man of the Match award in consecutive appearances after making some fantastic saves, particularly a one on one with Woking’s number 11, and commanding his area expertly.

The Christmas curry was a great success, and we all worked out Horace the Hippo, apart from Nico… 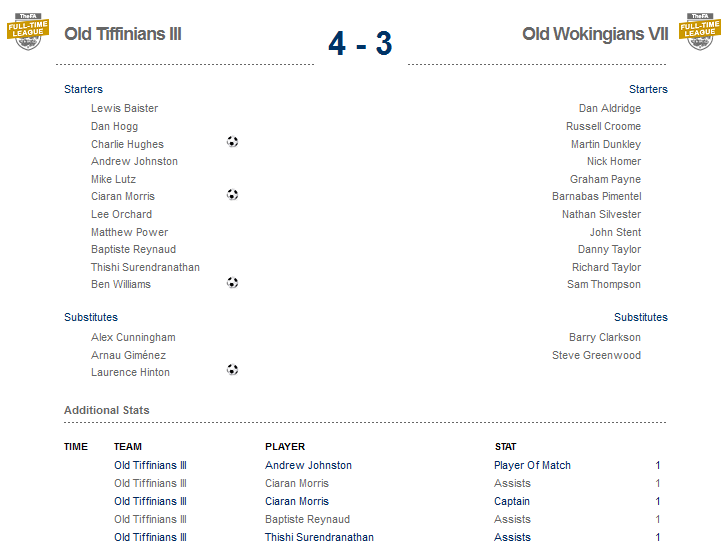