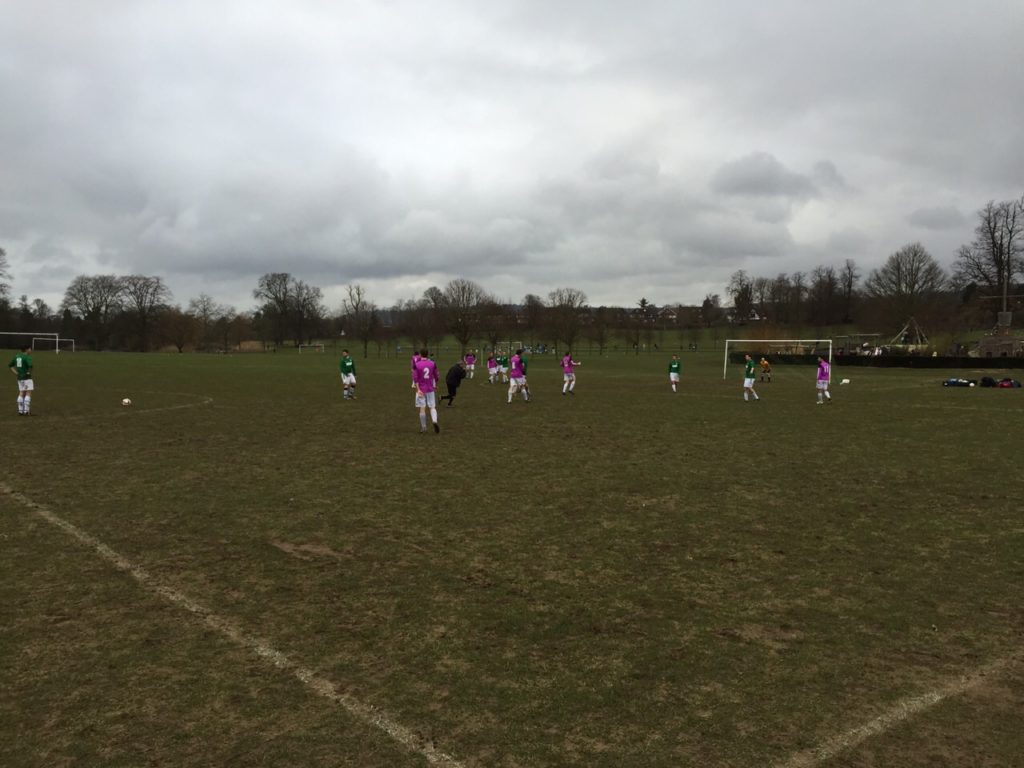 After the good series of great performances and decent results of the last weeks Old Tiffinians headed to Reigate with enough confidence to get the three points.

They knew it wouldn’t be easy based on previous experiences against Reigatians, plus the poor conditions of the pitch.

The game started with a fantastic save from Tiff’s keeper Andy Johnston in the first few minutes, which avoided a clear goal from the Reigatians. After the initial alarm Old Tiffinians started to play very strongly, keeping the ball in long possessions building each play with short passes and not allowing the opposition to keep the ball for more than five consecutive passes.   Ben Williams and Jamie Cobb showed they have nothing to envy to Busquets or Mascherano, stealing the ball every time Reigatians controlled it in the midfield.

But the dominance in the game was not translated into clear chances. The Old Tiffinians stepped up and started the pressure higher, which only allowed the opposition to find another two good chances that once again the magenta’s keeper was able to save.

Luck also allied itself with Reigatians when a triple opportunity in their area was not materialised in a goal after the post, the keeper and the defence were able to avoid the goal from Old Tiff’s strikers.

The first half ended with a bittersweet taste for the magentas as they were exhibiting good football but the score was still 0-0.

The second half started the same way and the Old Tiffinians proved they were the best team in the pitch. Finally the well-deserved reward came in the 60th minute when Guillermo ‘GG’ Guimera scored after a beautiful play from Aaron Langford. Langford dribbled past two defenders and assisted to GG, who scored after the ball deflected off a defender. A standard goal for GG, who is proving to be a scoring reference for the magentas.

But the goal switched the direction of the game. Reigatians started to increase the pressure on the Tiffinians who started to feel the big effort made during the first two-thirds of the game. And once again the bad luck hit the Hampton Court based team. An apparently innocent shot from Reigatians striker ended up in the goal of the Old Tiffinians. 1-1 and 20 minutes still to be played.

But the opposition proved to be stronger those minutes of the game and just five minutes later, after a series of three consecutive corners for the Reigatians, they found the goal. Big and undeserved punishment for the clear dominator of the game. After playing better football during 90% of the time Old Tiffinians found themselves behind a team who proved to be more effective.

The magentas tried really hard the last 15 minutes but the fatigue and the opposition’s defenders avoided the deserved goal Tiffinians were after.

It was an undeserved loss and the frustration was obvious in Old Tiffinians players who made a terrific game the first 60 minutes and proved the positive evolution the team has had the last weeks.