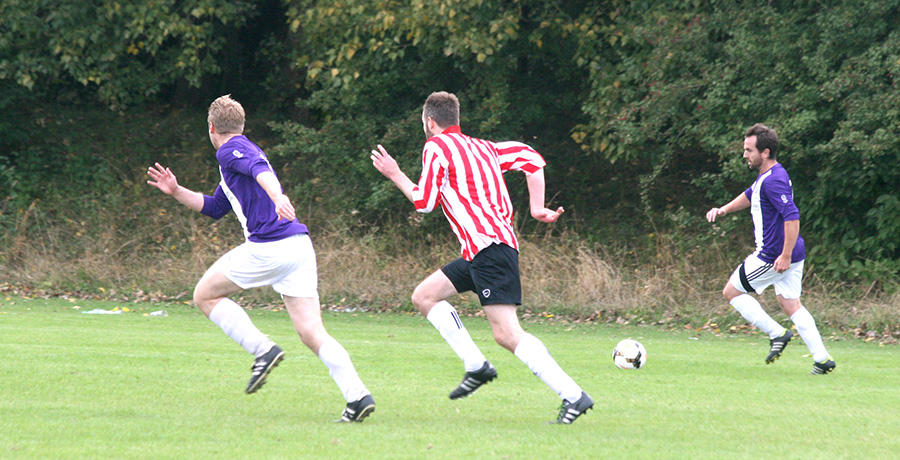 Once more unto the breach, dear friends…

The 2s came into this game against John Fisher off the back of an unfortunate 4-2 beating by…John Fisher. Fisher sent out a very similar squad to the previous week, while Tiffs made a number of changes – personnel, formation, attitude. Revenge was on the cards and the mighty purples decided they might actually be up for this game, or at least those that made it before kick off. Thumbs up all round as the CR6 public transport system and lack of car pool generosity made a number of journeys longer than expected. Warlingham, one of Croydon’s leafier suburbs, was not, as Tom Scott quickly discovered, about 15 minutes beyond Grists. Despite their lack of time management, the squad was grateful to the 1s for providing a number of key players, plus Steve Goodings, who, having been told the pitch was 15 minutes beyond Grists, turned out for beery support from the sidelines, only to watch the game on the adjacent pitch – “much more exciting”, he said.

In truth, he was probably right. The Fisher pitch had more bobbles than Kimber’s woolly hat collection and was arguably drier than even Colin’s sense of humour. Combined with an unpredictable wind, play was less than smooth. Early chances came and went – Tommo chipped over the bar, Dave’s blazed just over the bar, Steve wished he was at the bar (but made do with a six pack of warm Fosters) – until the ever-reliable Joe Sammarco decided to dig out another trademark wunderbang from his top drawer. Blocked shot from Dave falls to Joe, who flicks up a first touch and volleys the ball into the left-hand corner of the net. 1-0 OTFC, and very reflective of the dominant start to the game.

Fisher failed to create many chances in the whole match, and OTFC’s experimental 3-5-2 was paying dividends defensively. What no goalkeeper or defence can account for however is a fairly mediocre cross from a left back combined with a horrific gust of wind, flying high and long and dropping straight into the top corner, much to Seb Rose’s double-taking dismay. As vice-captain Forsyth put it: ‘that was postage stamp from the moment it left his boot – but he celebrated like he meant to do it, so definitely only a half-goal’.

1-1 going into the break and a positive half time mood led by player-manager Guardickyola, as it meant Tiffs now had the wind. This may have in fact proved to be the Tiffin’s undoing, a number of times carrying an otherwise well-weighted through ball straight to the Fisher keeper. The second half was, to be honest, relatively uneventful. A few handbags with Fisher’s gold-toothed striker (again), a few nutmegs from Colin (again), a few misjudged headers from Tom Nichols (again), but realistically not a classic. A late squandered flurry in the box ended Tiffs’ hopes of a winner. The draw was never in doubt from a very solid defensive performance – especially MOTM winner Rory – but sadly the win escaped OTFC on his occasion.

1 point out of a possible 6 against John Fisher within the fortnight is a disappointing and unfair reflection of the T’s performance and obvious quality. Now level on points in the lofty mid-table heights of the AFC Div 5 South, the hope is that Fisher don’t gain points in their game in hand to hurt Tiffs already very outside chances of promotion. But this is the AFC, so anything is possible.