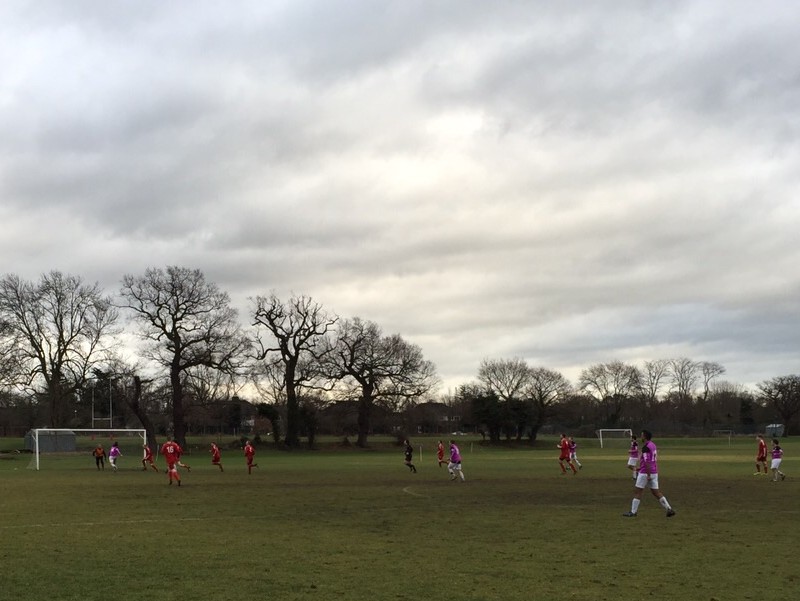 With this quote in mind, the Tiffs showed that, despite losing only their second game in six, their determination to play better and win matches is very much alive.

It was very unfortunate to lose this match 1-2 to Guildford, especially considering the amount of chances we had and the very few our opponents created.

We started the game slowly and showing too much respect to our rivals. After 15 minutes we began to create our first chances through Guillermo Guimera and Ben Williams, both players offering plenty of options upfront. First, it was Guimera with a clear chance to put the team in front only for the goal post to deny him. Williams had some good chances too, one of them went kissed the side of the post when he tried to chip the ball over the keeper (see video below).

The team continued to play some great football and Nico Telfer had a great opportunity to put one in but their keeper, who had a brilliant game, stopped the shot with his left hand.

Guildford’s only real chance of the half came after 35min when they hit the crossbar and on the rebound two of their players found themselves in offside positions.

We continued dominating on the pitch, passing the ball around nicely and putting ourselves into good positions to score a couple of goals with Williams being close a couple more times.

Against the run of play, however, Guildford made a great run down the right to beat a couple of defenders (some sloppy defending) and score the first goal of the match.

Heartbroken, but not beaten, was our team’s approach to this setback.

We continued as we were, in control and pushing forward. Soon after, a nice run down the left and a dribble left Telfer in a position to cross into the box only for their defender to stop the cross with his hand. Penalty.

Williams stepped up to the task and took the (pretty awful) penalty (see video) to level the scoreline. C’mon 1-1.

With the tempo slowly vanishing form everyone’s legs, the chances were few. Again Williams, man of the match, collected a great diagonal cross from Nico Telfer only for his low powered shot to find the body of the keeper. Missed chance? In the seconds that followed Guildford broke forward and scored their second with a great run down the right. It was a very well-worked piece of counter attacking but it left us gutted.

In the final minutes Tiffs tried to get a goal back, aided by Laurence Hinton making an excellent save in goal to keep us in it, but it was too late in the game and the end result stayed 1-2 to Guildford.

As we all went back to the dressing room, I could see everyone’s head down, thinking, reflecting on what had happened and where it had gone wrong. I was actually glad to see that it affected the team, it’s a clear indication that we are now a team, together in victory and defeat.