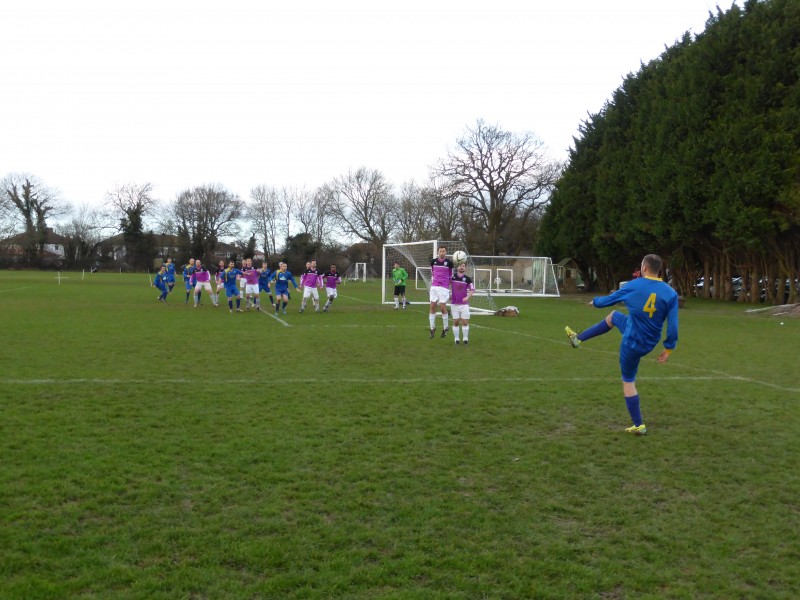 OTFC IIIs played their first game of 2015 away to John Fisher at the West Croydon/Sanderstead ground. John Fisher had beaten us 9-2 at Grist’s a few months earlier, in what was definitely our worst game of the season. The pre-game warm up went badly, with Lewis Baister losing one of our footballs with a sweetly-struck but wayward strike. However the game started far better for the magentas, Ben Williams and Baptiste Reynaud winning a lot of challenges and interceptions in the middle of the park and Matt Power making inroads from the right wing. A free kick on the edge of the opposition was taken by Reynaud, and rattled the angle of post and bar with the keeper beaten. See video for proof.

The pressure finally told, excellent play in the middle of the field left Baister able to play in captain Power who finished very well, his first goal for OTFC in 18 months. As often happens we didn’t keep playing at the same level following taking the lead and the opposition had a strong case for a penalty following a Mike Lutz challenge in our area, but the referee didn’t see it that way and booked a John Fisher player for his robust language when protesting.

Soon afterwards the referee missed a clear handball/charge down by a John Fisher striker which left him with an easy finish beyond Andy Johnston in goal. The game became increasingly disjointed and the referee stated that because of the constant appeals he was going to blow his whistle every time he saw anything. This resulted in several occasions where advantage should have been played, but wasn’t. OTFC continued to press, Jon Angell collecting a pass and forcing a good save from the keeper, who did well again shortly afterwards following a move involving Israel Nagore, Williams and Baister.

John Fisher took the lead when a defensive mistake from OTFC resulted in the opposition striker pinching the ball on the edge of the area and finishing well.

Worse was to befall us in the first half, following a shove from an opposition player the referee called a couple of players in for a lecture, but then allowed the John Fisher keeper to kick from his hands, and a couple of good passes later the ball was in the back of the net and we were 3-1 down.

Half time was a welcome break and the shuffling of the team moved Power back to wing back with a mobile midfield of Nagore, Williams, Reynaud and Hughes supporting Langford and Baister at the top of the pitch. This half we restricted John Fisher to very few chances, anything that did come through was dealt with by centre backs Lee Orchard and Dan Hogg or Johnston in goal. This left our full backs able to press higher up the pitch and Lutz delivered a series of throws-in towards our attack.

Finally we scored our second, Langford taking the ball and delivering a superb pass diagonally across the box to Williams who finished neatly to leave us right back in it. John Fisher kept the game at a slow tempo though, a couple of late challenges on Nagore breaking up our attacks, one in particular was pretty much a rugby tackle. A John Fisher advised his team mates to stop ‘Coving off to the ref’, which they did, but then a volleyed clearance from one of their midfielders hit the referee in the head, knocking him briefly unconscious. After getting to his feet he insisted he was okay to continue and the game resumed. Despite the majority of the possession we were restricted to a couple of half chances and the game ended (with a seemingly short period between 20 minutes to go and 1 minute to go) with the score still at 3-2 to John Fisher. Dan Hogg won MOTM for his excellent display. 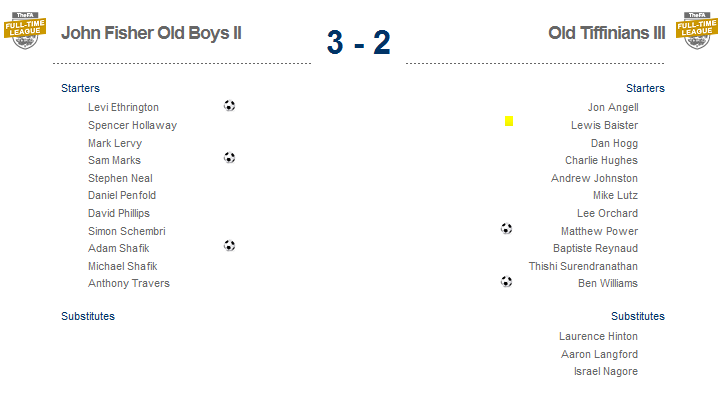