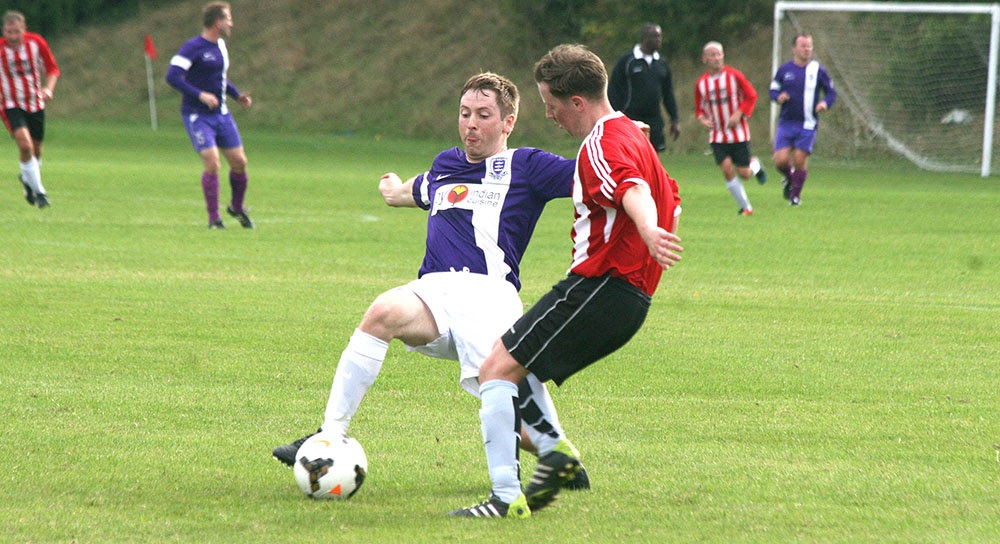 Good afternoon and welcome to this week’s edition of AFC Football Tonight – the show that brings you the best of lower-league amateur football’s lower leagues. Today our focus is on Southern Division 5, and a battle between two newly promoted sides – Old Suttionians V playing host to OTFC II in their top-secret base behind a hedge somewhere in the southwest of London.

The two sides could not be separated last season, both fixtures high-scoring draws, and the battle for 2nd place came down to the last day of the season – Tiffs edging Sutts on goal difference.

Reporting live from the scene is the young Eida Bostelmann, daughter of captain Guar-Dicky-ola and spokesperson for a generation. Eida, over to you…

Daddy’s team won last week and he said they were going to try and win again today.

Daddy decided to start with Colin in the middle because Tom Nichols was on the wing and Tommo went to the sidelines because Daddy wanted Dave to score instead. Dave scored lots last season. There was a man named Ben who was next to Tommo and someone called Ollie started at left back. Ollie does not look as old as the other players.

It was windy. The opposition were passing and tackling and playing better than Daddy’s team at first. They did not shoot though and it was Daddy’s Purple People who should have scored first – Tom Nichols wanted to trick the goalie by kicking it backwards first then straight into the goalie second. He did not score. Daddy’s team started passing more and everyone said Joe was doing well. They said that about Ollie too especially because he has never played at left-back before.

As Daddy’s group of Barney The Dinosaurs started playing better they kept saying they should have scored. Dave and John almost passed to each other and Luke almost hit the target with a shot. Colin passed it to Luke once.

John fell over with the ball at his feet and we all laughed. Then Dave did the same, but this time someone had made him fall over so it was a penalty. Daddy got very scared that no one was picking up a football, but someone did and it was okay. The goalkeeper asked Dave which way he was going to shoot and Dave said he didn’t know but he did know and he scored. He also hurt himself doing it and limped off. Tommo came on but no one passed to him.

Just before half time Old Sutts equalized. Their striker was left alone in the box and put the ball past Cottee. Although no one said it was Tom Nichol’s fault Kuldeep did say to Tom that he should always be trying to mark someone when he is defending. Even if no one had told him to yet. Kuldeep did not say what Tom should mark with though.

At half time everyone drank water. Except Daddy who drank some blue juice.

The second half looked like the first, although in the opposite direction. Daddy’s Joy Indian Promo Team failed to match the opposition. Eventually though they played better.

Ben had swapped on for Tom, and Colin told Colin to keep trying the to nutmeg people. But it only worked twice and he tried it a hundred times at least! Someone told me Ben was playing like Danny Drinkwater did for Leicester City before I was born. Eventually there were chances though, and after Colin passed tamely to the goalkeepers hands, John passed tamely into the net, scoring what I heard called a ‘trickling screamer’ but I don’t think that is right. It hit the post and went in though.

2-1 up with 20 minutes to go, and the Tiffees lost another player to injury. This time it was Joe who went down… Down a hill to get a ball for a corner, only to return a while later limping, confused and unable to continue. No one knows what actually happened down there but some people say that he was not alone.

With some decent Sutts players posing a threat it was almost inevitable that Daddy’s Friends would concede, especially as they kept giving away the ball when they had it under control.

Daddy tried to give Sutts a penalty but got the lines wrong and it was outside of the box. They did not score. But then they did.

The ball bounced loose from a tackle, and it was a deflection that allowed them to finally get past the defenders. Although arguably offside their striker leveled with a really good shot into the top of the goal.

Confusingly this is the second week in a row that Cottee has conceded two and was genuinely not at fault for any of them. Can that be right? I’ll ask Daddy.

Overall though I think a draw was probably a fair result, despite Daddy’s Champs being sad that they had not won.

Ollie was voted man of the match for playing football well, fingers crossed he can do it again.

Thank you Eida, very informative. Now make sure you try to sleep through the night.